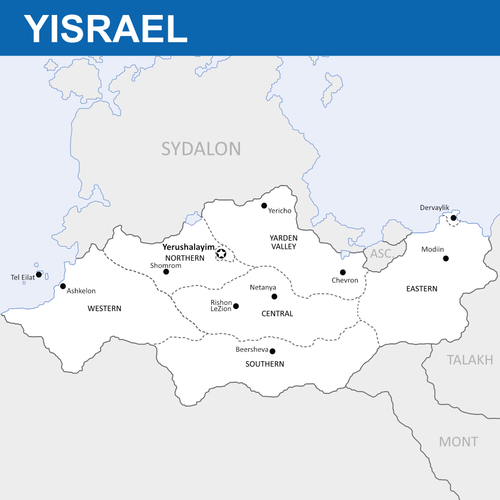 The District system of Yisrael refers to the system of federalist sub-national administrative districts in the Kingdom of Yisrael, known in Hebrew as mehozos (מחוזות; singular: mahoz). Unlike most nation-states, whose subnational administrative divisions have customarily been either "provinces" or "states," because of the Kingdom's small size and historical development, a framework of eight districts were created to administer Yisrael. Unlike most other states that have district-level political divisions, the Yisraeli districts have a quasi-autonomous and federal-local relationship with the central royal government in Yerushalayim.

The Royal Constitution grants each district a large amount of political independence more common found in federal states rather than the unitary systems often utilized for states as small as the Kingdom. Each of the eight districts elect their own district governments, including a governor and legislative council.

The districts have independent power to levy many of the same types of taxes as the Royal Government, and are chiefly responsible for funding the local police and security forces, education subsidies, environmental works, overseeing local business regulations, and allocating aid funds to municipalities under their purview. The districts have enabling power to charter, oversee, and veto policy and powers granted to cities and localities.

The Royal Knesset has appropriated approximately $1.7 billion shekels in district and local aid in recent years.

The 1920 Constitution gives the districts the power to establish enabling legislation for all sub-district political entities, including cities, towns, and special subdistricts. All localities' political charters were approved by the district governments, and the localities only have the powers granted to them by the legislative councils. These powers are discretionary and may be revoked by the district governments as they see fit.

Retrieved from "https://iiwiki.us/mediawiki/index.php?title=District_system_(Yisrael)&oldid=279914"
Categories:
This page was last edited on 26 November 2020, at 21:15.
Privacy policy
About IIWiki
Disclaimers