Gangkou is an overseas-Administrative District (Province) and Zamastanian-dependent island and legation-city off the coast of Yuan, with an estimated population of 7,078,000 within its administrative limits. Significant in 19th-century Yuan history as one of the treaty ports established for Ausiana and Euronian trade and contact, Gangkou was one of the original special economic zones of Yuan established in the 1800s. It was given over to Zamastan as part of the 1905 Treaty of Tiaking that established legation cities. Zamastanian influence in the city can be seen in the city's economics and culture. Originally a sparsely populated area of farming and fishing villages, the past century of Zamastanian administration has let the territory become one of Ausiana's significant financial centers and commercial ports. Gangkou has a major capitalist service economy characterized by low taxation and free trade, and hosts a high concentration of ultra high-net-worth individuals.

People born in Gangkou are automatically granted Zamastanian citizenship, but people who immigrate to the city are unable to gain citizenship unless they move to mainland Zamastan. The city also hosts a naval port that services the Navy of Zamastan. The city has been the focus of historical controversy due to its proximity to the Yuan and Beleroskov mainlands.

Gangkou was an island prominent with fishing villages during the majority of the history of the Yuan Empires.

Sio Kong Ng park in the historic quarter of Gangkou, which features both Zamastanian and Yuan architecture

Connecting to Gangkou across the Queshi-Hapson Bridge is the neighborhood of Queshi, which was the main site for the original Zamastanian consulates. Today the area is a scenic park but some of the structures from its earlier history are somewhat preserved. In 1860, Gangkou became a trading port.

In 1900, the Yellow Flag Rebellion erupted when socialist, anti-imperialist revolutionaries began a campaign to overthrow the emperor and expel foreign powers from Yuan. The Battle of Guangadou on September 4th, 1902, brought greater foreign intervention to the nation, with Zamastan, Caspiaa, and Drambenburgian interests backing the emperor and his government. During the uprising, rebel forces occupied the island. The arrival of Zamastanian armadas and landing forces turned the tide of the occupation, and the control of power shifted following the Zamastanian victory in the Battle of Genghau. On August 6th, 1905, the Treaty of Tiaking ended the Yellow Flag Rebellion, and the emperor granted the island of Gangkou to Zamastan in a deal of a 2-century lease which would expire on August 6th, 2105.

In 1906, largely as a result of the violence from the Yellow Flag Rebellion, the great Yuaneze diaspora began. Losses due to emigration were added to by conflicts and catastrophes such as the Southern Yuan Famine of 1904-1910, in which between 9 and 13 million people died. Emperor Pan Guanting drafted a reform plan in 1908 to establish a modern constitutional monarchy, but in the 1908 Yuan Revolution, socialists assassinated Guanting, ended the Heng Dynasty, and established a socialist, one-party republic. Gangkou remained capitalist under Zamastanian and Euronian influence while mainland Yuan fell to communism.

In the 1930s, as a transport hub and a merchandise distribution center, Gangkou's Port's cargo throughput ranked among the highest in Ausiana due to the bilateral effects of Zamastanian and Yuan influence. During the World War, the Zamastanian navy created permanant bases in the city's central harbor and used it as a staging base to run operations alongside Allied Forces during the Vulkaria and Jerku campaigns. Following the war, the territory was incorporated as an administrative district (province) of Zamastan in 1956, giving citizenship to every person born on the island.

The public-housing estate programme, Commission Against Corruption, and Mass Transit Railway were all established during the post-war decades to provide safer housing, integrity in the civil service, and more-reliable transportation. Although the territory's competitiveness in manufacturing gradually declined because of rising labor and property costs, it transitioned to a service-based economy. By the early 1990s, Gangkou had established itself as a global financial centre and shipping hub.

In the 21st century, Gangkou has become one of Ausiana's most important economic zones. On August 19th, 2021, President Xi Jingyi demanded that the Treaty of Tiaking be nulified and that the Zamastanian lease on the island would end in 2025, 80 years ahead of schedule and sparking a diplomatic crisis. 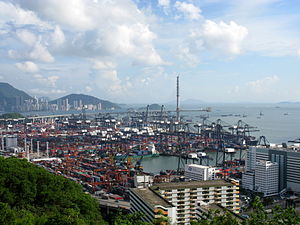 Gangkou's economy is average by Yuan standards. Manufacturing accounts for a large and increasing share of employment. Canning, garments, lithography, plastic, and toys are some of the principal products, although the city hosts dozens of Zamastanian and other foreign companies that service the technology, retail, and automobile industries.

In 2019, the analyzed data of Gangkou GDP is approximately Z$630.4 billion, making it one of the wealthiest areas in the region proportionate to its population.

With an area of 2.34 km2 (0.90 sq mi), Gangkou Free Trade Zone lies at the north part of the city, established by Zamastanian authority in 1987. It has been comprehensively developing export processing, storage, international trade, finance and information industry. Its goal is to establish a modernized international zone that is open to overseas by drawing experience from international free trade zones.

The urban area of Gangkou in 2020, along with its major islands. Sediment discharging from the Tangtze River can be seen.

Gangkou is an island in West Ausiana. The main island, known historically as Gangkou Island, makes up 99% of the area controlled by the Zamastanian government, measuring 35,808 square kilometres (13,826 sq mi) and lying some 180 kilometres (112 mi) across the Sancheon Gulf from the southwestern coast of mainland Yuan. The Toyana Ocean lies to its west. Smaller islands include a number in the Sancheon Gulf including the Anghu archipelago, and the Ninen and Catsu Islands. These smaller islands are often in dispute with the Zamastanian government and the Yuaneze government claims.

The main island is a tilted fault block, characterized by the contrast between the eastern two-thirds, consisting mostly of five rugged mountain ranges parallel to the east coast, and the flat to gently rolling plains of the western third, where the majority of Gangkou's population reside. There are several peaks over 3,500 m, the highest being Yu Pan at 3,952 m (12,966 ft), making Gangkou the world's fourth-highest island. The tectonic boundary that formed these ranges is still active, and the island experiences many earthquakes, a few of them highly destructive. There are also many active submarine volcanoes in the Gangkou Straits.

The city of Gangkou is located on the Tangtze estuary of island's southwest coast. The land is formed by the Tangtze's natural deposition and modern land reclamation projects. As such, it has sandy soil, and skyscrapers are to be built with deep concrete piles to avoid sinking into the soft ground. The Zamastanian-administrations administer both the main island and 4 of its surrounding islands.

The Gangkou Island skyline, viewed from the Saunders Harbor waterfront

The predominent language on the island is English, although Yuaneze is widely spoken. 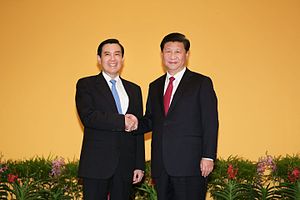 The political and legal statuses of Gangkou are contentious issues. The People's Republic of Yuan (PRY) claims that the Zamastanian government's claim over the island is illegitimate, referring to it as the "Gangkou Authority". However, since the Treaty of Tiaking in 1905, Zamastan has held soveriengty over the island. Gangkou has its own currency alongside the Zamastanian dollar, both of which are accepted monetary trade as opposed to the Yuaneze yen. Gangkou also has a widely accepted passport, postage stamps, internet TLD, armed forces and constitution with an independently elected president, all alongside Zamastanian government functions.

Internationally, the island is generally recognized as Zamastanian sovereign territory. Only a handful of nations, most prominently Yuan, dispute it. Other regional states, most significantly Tosichi and the Kalea Confederation, endorse the sovereignty of Zamastanian control of the islands, largely as a move to deter Yuaneze influence. In the 21st century, Gangkou has become one of Ausiana's most important economic zones. On August 19th, 2021, President Xi Jingyi demanded that the Treaty of Tiaking be nulified and that the Zamastanian lease on the island would end in 2025, 80 years ahead of schedule and sparking a diplomatic crisis.