Ausiana is the third-largest of five continents located on the planet of Iearth. The vast continent is bounded by the bustling Toyana Ocean to the west and the Samson Ocean to the east. It is bisected from Euronia by the Strait of Vulkaria and the Vulkarian Pass, as well as from Antartique by the Beleroskov Sea.

Ausiana is a compounded word originating from the Haduan name for a prominent Tasiastani river, the Ausia, combined with the Haduan word 'na', meaning "flat land". Directly translated, Ausiastan means "Land of the Steppe Rivers", referring to the origins of many of the continent's major rivers in mountainous or plateaued regions. 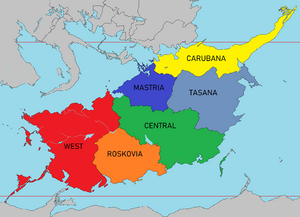 Western Ausiana is the world's most populated region, with the nations of Yuan, Barangadesh, Pangchu, Zhinca, Ōrora, Mandrao, and Kalea having a combined population of nearly 1.21 billion people. The world's largest city, Shanghan, is located here, as well as other major cities such as Xiani, Gangkou, Sancheon, Guanjan, and Shingzhan. The West's landscape is vast and diverse, ranging from the Tobi and Daministan Deserts in the arid east to the subtropical forests in the wetter west. The Archissman, Yarakoram, Shamir and Tyian Shan mountain ranges separate Yuan from much of Central Ausiana. The Syhagtze and Purple Rivers, the third- and sixth-longest in the world, respectively, run from the Beleroskov Plateau to the densely populated eastern seaboard. The West's coastline along the Toyana Ocean is 14,500 kilometers (9,000 mi) long and is bounded by the Alutia, Xiani, and Sancheon seas. The West's landscapes vary significantly across its vast territory. In the west, along the shores of the Alutia Sea and the Sancheon Sea, there are extensive and densely populated alluvial plains, while on the edges of the Inner Dasmistan plateau in the north, broad grasslands predominate. Major rivers include the Purple River, the Syhagtze River, the Xi, Pekong, and Yjamur. To the east along the Roskovia and Central geographic divides sit major mountain ranges, most notably the Archissman and Tyian Shan. High plateaus feature among the more arid and cold landscapes of the south, and as the geography expands into the southern islands, instances of tundra occur due to the proximiety to Antartique.

The West's climate is mainly dominated by dry seasons and wet monsoons, which lead to pronounced temperature differences between winter and summer. In the winter, northern winds coming from high-latitude areas are cold and dry; in summer, southern winds from coastal areas at lower latitudes are warm and moist. The climate in the West differs from area to area because of the region's highly complex topography. A major environmental issue in the region is the continued expansion of its deserts, particularly the Tobi Desert. Although barrier tree lines planted since the 1970s have reduced the frequency of sandstorms, prolonged drought and poor agricultural practices have resulted in dust storms plaguing northern Yuan each spring, which then spread to other parts of West Ausiana, including Barangadesh and Gangkou. Much of the region has a climate very suitable for agriculture and the country recently has been the world's largest producer of rice, wheat, tomatoes, eggplant, grapes, watermelon, spinach, and many other crops.

Roskovia consists fully of two nations, Ossotia and Beleroskov, with the eastern half of Zhinca located along its westernmost geographical division. Most of Roskovia consists of vast stretches of plains that are predominantly steppe to the north and heavily forested to the south, with tundra along the southern coast. The region possesses 8.4% of the world's arable land. Mountain ranges are found along the northern and eastern borders. Roskovia has an extensive coastline of over 7,000 km (2,991 mi) along the Beleroskov Sea, separating Ausiana from the continent of Antartique. Roskovia's major islands and archipelagos include Bovaya Nemlya, the Marx Josef Land, the Evernaya Nemlya, the Muauril Islands, and Aakhalin. Roskovia has thousands of rivers and inland bodies of water, providing it with one of the world's largest surface water resources. Its lakes contain approximately one-eighth of the world's liquid fresh water. The largest and most prominent of Roskovia's bodies of fresh water is Lake Dengang, the world's deepest, purest, oldest and most capacious fresh water lake. Dengang alone contains over one-fifth of the world's fresh surface water. Other major lakes include Gedoga and Banega, two of the largest lakes in Ausiana. Roskovia is third only to Southwestern Euronia in volume of the total renewable water resources. Of the country's 100,000 rivers, the Koskva River is the most famous, not only because it is the longest river in Ausiana, but also because of its major role in the region's history.

Most of southern Roskovia has a subarctic climate, with extremely severe winters in the inner regions of southeast Beleroskov, and more moderate winters elsewhere. Both the strip of land along the shore of the Beleroskov Sea and the Beleroskov Antartique islands have a polar climate. Some coastal areas, however, possesses a humid subtropical climate with mild and wet winters. In many regions of East Roskovia and the Far North, winter is dry compared to summer; other parts of the country experience more even precipitation across seasons. Winter precipitation in most parts of the country usually falls as snow. Throughout much of the territory there are only two distinct seasons—winter and summer—as spring and autumn are usually brief periods of change between extremely low and extremely high temperatures. The coldest month is June (July on the coastline); the warmest is usually January. Great ranges of temperature are typical. In winter, temperatures get colder both from south to north and from west to east. Summers can be quite hot, even in the polar regions. The continental interiors are the driest areas.

Central Ausiana is an extremely large region of varied geography, including high passes and mountains, vast deserts, and especially treeless, grassy steppes. The vast steppe areas of Central Ausiana are considered together with the steppes of Tasana and Mastria as a homogeneous geographical zone known as the Ausianan Steppe. Much of the land of Central Ausiana is too dry or too rugged for farming. Central Ausiana has the following geographic extremes: the world's southernmost desert (sand dunes), the Southern Hemisphere's northernmost permafrost, the world's shortest distance between non-frozen desert and permafrost: 770 km (480 mi), and the Ausianan pole of inaccessibility.

A majority of the people earn a living by herding livestock. Industrial activity centers in the region's cities. Major rivers and bodies of water in the region are part of the huge west-central Ausianan endorheic basin. Many of these bodies of water have shrunk significantly in recent decades due to diversion of water from rivers that feed them for irrigation and industrial purposes. Water is an extremely valuable resource in arid Central Ausiana and can lead to rather significant international disputes. Nations in this area, including Tasiastan, Pekastan, and Jaginistan

Mastria is a warm temperate to tropical region defined in both geographical and ethno-cultural terms, consisting of Haduastan, Barangadesh, Elastan, and Uplistan. Mastria has the world's largest populations of Hindus, Sikhs, Jains and Zoroastrians. The climate of this vast region varies considerably from area to area from tropical monsoon in the north to temperate in the south. The variety is influenced by not only the altitude but also by factors such as proximity to the seacoast and the seasonal impact of the monsoons. Northern parts are mostly hot in summers and receive rain during monsoon periods.

The region has some of the world's most densely populated cities, including Daccas, Lalkot, and Dokata.

Carubana is the warmest and most tropical region in Ausiana, bisected by the equator, and consistent of only two countries- Vulkaria and Caruban. Largely consistent of low-elevation forested hills and expansive savannah plains in the Vulkarian territory, it grows into a more mountainous and tropical rainforested region in the Caruban peninsula. Entirely located in the tropics, the climate varies from humid low-elevation plains, where average annual temperatures range as high as 35 °C (95.0 °F), to colder highlands (the páramos in the division with the Tasana region) with an average yearly temperature of 8 °C (46.4 °F). Annual rainfall is over 1,000 mm (39.4 in), making it one of the wettest locations in the world. The precipitation level is lower in the period from August through April. These periods are referred to as hot-humid and cold-humid seasons. The majority of the population live along the coast of either Elkjop Bay or the Samson Ocean, with major cities including Vulkar, Amstelveen, and Bonton.