Kelonna, officially the Kingdom of Kelonna (Kelnish: Kelnisch Kuningruga), is a sovereign island nation in Astyria. It lies to the southwest of Teudallum, the closest landmasses being the island states of Jarridia to the northwest, Valle Crucis to the southeast and Torim Viqalka (Cadenza) to the east. Kelonna is a largely rural nation, it covers an area of 868,000 square kilometres and is home to 96 million people which are concentrated mainly in the north of the country. Brecischpola is the largest city and a financial centre for the country while Marianport is the capital city and seat of the Kelonnan crown.

Kelonna has a rich history and culture influenced by its indigenous people, first Lorecian settlers and Cadenza. Natives were cool but they do not exist now. The consolidation of the Kingdom of Kelonna happened around the seventeenth and eighteenth centuries with an expansion of its territories in Kelngsa, Acsia and Kyngsa, most of them Cadenzan colonies.

The Kelonnan population has a large Lorecian background while natives remain as the largest minority, followed by smaller groups of not Trellinese and other ethnic groups from Teudallum. Despite being isolated during most of its history and having an insular view towards the rest of Astyria, Kelonna underwent an openness policy during the 1980s and 1990s that has ensured its financial and economic stability and large flows of immigration. The nation has now a very developed economy based in the production and exportation of high value products, however, the services sector is increasing with large contribution of the technology industry, tourism and the financial sector. The Kingdom of Kelonna also performs at or near the top in several international welfare and democratic indexes such as the Human Development Index, press freedom, quality of life, civil liberties and education and competitiveness. The country is known for its democratic and stable politics and as one of the most peaceful countries in Astyria. Kelonna maintains a neutral policy during international conflicts and is unaffiliated with any defence-focused intergovernmental organisation; however, its foreign policy has been favourable to the Astyrian Treaty Organisation. The country enjoys good relations with most other Astyrian countries and is a close trading ally of the Lorecian Community.

The consolidation of Kelonnan territory in the seventeenth and eighteenth centuries ultimately led to the Kingdom coming into conflict with Cadenza, which from the 1630s had established a presence on the island of Acsia and on the Kelonnan mainland. A series of Cadenzan-Kelonnan wars occurred over more than eighty years, ultimately forcing Cadenza to relinquish its Kelonnan holdings.

Kalenhuda Riding in the summer

The nation of Kelonna consists of an archipelago with a land area of 850,817.41 square kilometres which lies between 19 and 31 degrees south of the equator. The main island of the Kelonnan archipelago is Kelngsa, followed by Acsia and Kyngsa. It enjoys a humid subtropical climate in the north and a temperate climate in the south, with heavy rainfall throughout the spring and autumn months. This has given the country lush vegetation and most of Kelonna is covered in extensive grasslands, with forests in the northeast and along the west coasts.

Kelonna is a constitutional monarchy with a parliamentary democracy in which the King Leopold II of Kelonna acts as Head of State of the Kingdom while the Prime Minister Christiaan Nieuwoudt acts as Head of Government. The legislative power of the Kingdom is vested on the bicameral Parliament of Kelonna; its two chambers are differentiated by their characteristics as the Upper House consists of the Kingdom's hereditary nobles and life peers (currently 218). Members of the Lower House are elected by universal suffrage every five years together with the Prime Minister; few governments have achieved absolute majority in the last decades, which has led to elected Prime Ministers form coalition governments to gain confidence in the Parliament. Since the last elections, the government has been dominated by a centre and right-wing coalition of christian democrats and liberals that have steered Kelonna out of cultural isolationism and into a period of increased regional ties; in the last years, the Prime Minister Christiaan Nieuwoudt has concluded several economical and political agreements with other Astyrian leaders in an effort to demonstrate the changes in the Kelonnan society and politics.

Over the last years, the presence of the Monarch in the Kelonnan politics has been purely ceremonial, being restricted to the appointment of ambassadors, the formation of governments and calling for elections. As well as in the case of the Prime Minister, the Monarch can not act without advise of the ministers during the Council of Government, a council that meets weekly with presence of all the ministers and the King to take decisions and dictate policy; during the meetings, the King presides but its voice has not influence in the decision-making process. 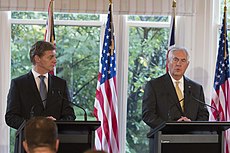 The foreign policy of Kelonna has been influenced by a strong isolationism from the rest of Astyria and a neutrality policy during regional conflicts, however, in the last years and under the latest Christian Democrat-Liberals administrations, Kelonna has reshaped its foreign relations, with a strong liberal approach over the openness of its economy and a slight favouritism during regional conflicts to the Astyrian Treaty Organisation. The foreign relations of Kelonna have a strong orientation towards developed and democratic nations in Astyria with Trellin, Cadenza and Jarridia as main commercial partners of the Kingdom. The recent change of policy in the Kelonnan politics, from a mainly isolationist nation to a widely open nation, has been followed by a strong promotion of free trade relations and the inclusion of the country as observer or associated member in many trade blocs, specially with the Lorecian Community, whose members are important trade partners of Kelonna.

The Kingdom of Kelonna enjoys of large presence in international organisations being a founding member of the World Assembly and the Astyrian Peace Organization. In recent times, the government has applied an eco-friendly approach on its foreign relations, promoting sustainable methods of consumption and generation of energy, as a result, the country is a strong advocate of the Regional Environmental and Ecological Fund and has hosted the first conference about the climate change in 2019.

Kelonna is divided into eleven political units known as ridings. These units are administrated by elected councils, or ruydetingen. Riding governments are responsible for the provision of services such as education, including libraries, healthcare and emergency services. Cities and some large towns are administrated by their own councils with similar responsibilities. 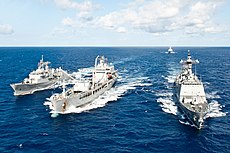 Ships of the Kelonnan Navy during joint warfare exercises in the Sea of Jajich.

Kelonna's armed forces —the Kelonnan Defence Forces— comprise the Kelonnan Navy (KN), the Kelonnan Army (KA) and the Kelonnan Air Force (KAF). Although the foreign relations of the Kingdom has proactively sought non-aggression relations with others countries, Kelonna has maintained during the decades, a strong and capable army with wide presence in Astyria, specially during pacification processes, anti-piracy initiatives and joint warfare exercises.

The the 2017-18 budget, defence spending comprised 1,5% of GDP, an average spending commonly mantained by Labour past administrations and the current Christian Democratic-Liberal ones. The Kelonnan Defence Forces are formed by 6,492 men and women, counting active, reserve and civil personnel. Of that total, Kelonna currently has deployed 1,578 personnel doing peacekeeping actions in Pangus, Caranad and Belka. The Commander-in-Chief is the King Leopold II of Kelonna while the Prime Minister acts through the Minister of Defence.

The central business district of Marianport.

Kelonna has benefited of a long and stable period of protectionism before outgoing an economical openness during the 1980s. The country has ranked over the years, in the top ten of several international welfare, economic and social indexes. The Kingdom has a high-income economy with a nominal GDP per capita of $38,176, one of the lowest unemployment rates in Astyria and a relatively low rate of poverty. The capital city of Kelonna, Marianport, is a large financial centre for the country and the region.

The Kingdom of Kelonna has a diversified production of fruits and vegetables with apples, kiwifruits, grapes, peaches and in very concentrated areas of the south, blueberries. Together with the forestry, logging and fishing, the primary sector employs 14.6% of the country's labour force. As a nation with a large primary sector, Kelonna is heavily dependant on exportations. Exports approximately constitute 25% of the Kelonnan economy and have played a substantial role in its growth; during 2017, agricultural raw materials accounted for over 20% while processed aliments were estimated at 50% of the total exports. During the 20th century, the leading product on its exportations was wool. However, lower prices that caused the diminution of its profit and new competitors, pushed Kelonna's farmers to find a new place in global trade with dairy farming products; the dairy industry is today probably one of the most important sectors of the Kelonnan economy with milk and its derivatives, cured meats, wine and wheat constituting the majority of the agricultural exported products.

Historically, Kelonna has had a large wine industry, especially in valleys and coastal areas. According to last stats from 2017, nearly 80% of the production is exported, especially to countries members of the Lorecian Community, Caledonia and Trellin. A recent increment on the exportations was seen since 2017 with a revenue record of KLK 1.71 billion that same year. Since 1990, Kelonna has gone under a large investment in the development of the oenology that continues giving the country an advantage to compete with new wine producers.

Kelonna's economy has also an important services sector in large urban areas. In the last years, Marianport has grown as a gateway to the rest of Kelonna, it is considered a financial and technological centre as well as an image of the strong and stable growth of the Kingdom, the city is home to three of the five largest banks in the country and has one of the largest numbers of internet-based small companies. The services industry in Kelonna is based around the ridings capital cities and currently accounts for more than half of the national GDP. Kelonna benefits of a well-developed infrastructure in telecommunications and transport that has impulsed large scale tourism from across the region. 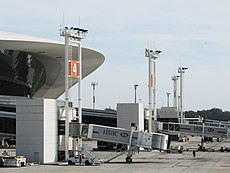 Brecischpola International Airport, with 2-5 million passengers annually it is the second busiest airport in Kelonna after Marianport.

As a very developed nation, Kelonna counts with an advanced infrastructure. The country has a dense network of roads concentrated mainly in the north of the island that connects the major urban centres of Marianport and Brecischpola with the rest of Kelngsa. Despite having a mostly rural population sprawled across the main island, governments have had the development of infrastructure as a major point on agendas, the country has today a large telecommunications and transport infrastructure that has contributed to the stable growth of the quality of life outside cities. Kelonna counts with approximately 120 airports and aerodromes connected with the rest of Astyria by international airlines and the flag carrier Kelonnan Airlines. The International Aiport of Marianport is a regional hub that connects the city with more than 65 international destinations, in 2018 it was catalogued as one of the busiest in Astyria, handling 10-15 million passengers annually.

Approximately 80.1% of the energy in Kelonna is domestically produced using renewable sources. Its diverse geography provides a complete terrain for the development of different projects to generate renewable energy. In 2018, hydropower stations provided about 75% of primary energy, the share of wind farms was 10% and the share of geothermal stations was 5%. Solar technologies are a fast-growing industry after prices became more accessible in Kelonna, since 2010 the government has carried out plans of diminution of taxes to those homeowners that changed to this type of energy production.

Kelonna is a largely rural nation, with few large settlements outside of its provincial capitals. The largest city is Marianport, on the east coast, with a population of 3.8 million in its metropolitan area. The capital, Brecischpola, has a metropolitan population of 1.7 million. Most cities are coastal and the greatest concentrations of people are in the north of the country.

Retrieved from "https://iiwiki.us/mediawiki/index.php?title=Kelonna&oldid=136568"
Categories:
Hidden categories:
This page was last edited on 4 December 2019, at 01:04.
Privacy policy
About IIWiki
Disclaimers