Jajich (pronounced /ˈdʒɑdʒɪtʃ/; Ahéri: Ghadik, pronounced /ˈɡɑdɪk/), officially the Earldom of Jajich (Ahéri: Mlaqiz ti'Ghadik; Trellinese: Kerepaqa Jajexa), is a province of the Trellinese Empire. It is the seventh smallest by area and the second smallest by population. Its landmass of 9,643.81 square kilometres includes most of the Jajexan Peninsula, with the exception of the Trophy Port Durats, and eight islands between five and ninety square kilometres in area. It is bounded by the Sea of Jajich and Sea of Velar to the west and east, the Straits of Jajich to the north and the province of Bal Emrith to the south, and borders Durats in the northeast on three sides. Jajich's population of 1,137,156 is mainly centred around the capital, Tar Rethin, and Durats, with the east and northeast coasts being the most densely populated areas.

Jajich is one of only two provinces in Trellin where Ahéri remains a majority language, a result of its colonisation by the Hyseran Empire in the second century BC as an attempt at containing Trellinese expansionism. In 694 AD, during the decline of Hysera, Jajich peacefully seceded and remained an independent nation until its annexation by Trellin in 1381. During its existence as a sovereign state, Jajich thrived on trade through the Straits of Jajich, and the ports at Durats and Tar Rethin were two of the most important in the Sea of Velar.

Modern Jajich is governed by the Earl of Jajich and his Comital Council, whom he appoints at the nomination of the Landholders' Assembly. Despite its name, all citizens have held a vote in the assembly since 1893. The province is regarded as one of the more foreign-minded in the empire and has been noted for its speed in adopting green energy and football, among other activities.

Geographically, the province, which is located where the seas of Jajich and Velar meet at the Straits of Jajich, is characterised by sandy coasts and flat inland plains. Its economy is based largely around farming of its considerable arable land and the sale of this produce to the rest of Trellin. Once heavily forested, most of Jajich was cleared for agriculture between 100 and 400 AD.

It is not currently believed that Jajich was permanently settled before the Hyseran colonisation in 177 BC, though evidence has been found for camp fires and shellfish from the 9th century BC. Whether these belonged to sailors on the Sea of Velar or to itinerant hunters is a matter of considerable debate.

Jajich was first settled by the Hyseran Empire as a preemptive measure to limit the overseas growth of Trellin. Its strategic position for controlling trade through the Straits of Jajich soon made it a target for Trellinese ambitions, and its ports were quickly fortified. As the mode of warfare between the two powers shifted to become more maritime, the Jajexan rainforests were used to construct a large fleet for the Hyserans. The destruction of the Grand Armada in 173 AD brought an end to the era of Jajich as the home of the Hyseran fleet, as the empire became more defensive on the sea.

Sana ti'Gadan (modern Tar Rethin) was attacked several times during the fourth century, and much of its port was burned. To protect their assets, the merchants of the city would pay off the Trellinese fleets, and the focus of the empires' rivalries slowly moved away from Jajich.

Jajich seceded from the Hyseran Empire in 694. Imperial representatives stationed in the province were expelled and a token force sent to subdue the province was repulsed in a bloodless showdown in 696. The earldom made occasional tribute to both Hysera and Trellin in a bid to maintain its independence.

Jajich hosted the court of Tovelindra I of Trellin during the usurpation of Zilmar and assisted in a blockade of Mar'theqa to reinstate her. After this civil war, Tovelindra promised the earls of Jajich "ten generations of gratitude," manifested in a ritual tribute on the accession of each of Tovelindra's successors until the usurpation of Palav ti'Eza. Jajich waged a brief war with Trellin during the Year of Five Kings (1047) until Ri'erha II offered a final tribute and restored peace.

It was ultimately annexed to Trellin in 1381.

The coast of northwest Jajich

The geology of Jajich mostly consists of granite bedrock, which entered the lithosphere in the form of magma during the collision of the Jajexan plate with the Tenedian plate about 450 million years ago. Only vestigial hills remain of the resulting period of intense crustal folding, leaving a predominantly flat landscape with gently rolling hills. An inconsistently smooth coastline has permitted numerous beaches to form in small bays, and many of its small islands are connected to the mainland and one another as parts of tombolos and spits. Sand dunes line much of the coast, behind which lies the long, thin plain of the Jajexan interior. 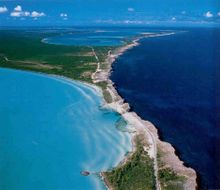 The island of Eleu Duratsi. Left is the internal Sea of Velar, right is the darker water of the Straits of Jajich

Jajich is noted for its rich soils, a result of millennia of forestation before human settlement. Most of its thick interior jungle and mangrove swamps were cleared for agriculture between 100 and 400 AD and the wood used in the construction of ships for the Hyseran Empire's wars with Trellin. The province has become one of the most important and most productive agricultural regions in the Trellinese Empire despite its small size.

Jajich's economy is centred largely around its agricultural industry and those of its southern neighbours. The Jajexan peninsula is the site of two of the empire's busiest ports, Tar Rethin and Durats, which between them are responsible for close to 40% of Trellin's agricultural exports.

Jajich is the Trellinese Empire's second-least populous province, the 2013 census having recorded just 1,137,156 citizens. Despite its long history of settlement, it remains sparsely populated, with most of its land area being given over to agriculture: across the entire province, the population density is 117.92/km2 (305/sq mi). High rates of outward migration among the younger generations, especially to cities in Trelum, Alyrum and Idisamo, have been a social problem since the 1920s.

Retrieved from "https://iiwiki.us/mediawiki/index.php?title=Jajich&oldid=56290"
Categories:
Hidden categories:
This page was last edited on 9 April 2019, at 14:49.
Privacy policy
About IIWiki
Disclaimers