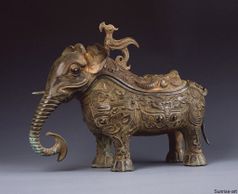 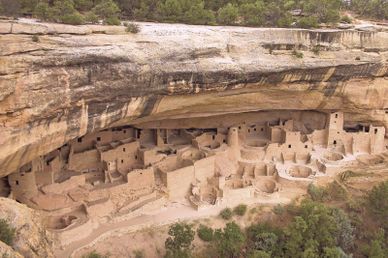 Well-known Ancient artworks, each representing a certain civilisation. From left to right, top to bottom: depiction of 2 Calidum deities (Calidum Empire), the Striding Lion (Iserlon), the Qingtong Xiang (Quan), the Statue of I Ahila (Pylos), the city of Atontec (Creek)

The Ancient Era, also known as Ancient History is the period of time between the beginning of recorded history and the collapse of the Iron Age. The term Ancient Era is not to be confused with the Antiquity Era, the Era that followed the end of the Ancient Era.

The Bronze Age begins with the end of the Cuprulithic Age. In most areas of civilisation, bronze smelting became a foundation for more advanced societies in places such as Hesterath, North Domica, Trimeshia, and Oranland. Modern historians have managed to identified 4 original civilisations which emerged in the time period. 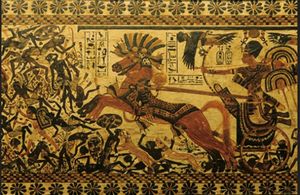 Depiction of Remansete II riding into battle in his chariot during the Calidum Civil War. 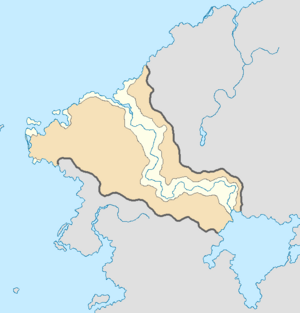 The Iron Age is the second and last age of the Ancient Era, spanning from 1000 to 550 BCE. The Iron Age overall was characterized by the prevalent smelting of iron with ferrous metallurgy and the use of carbon steel. Smelted iron proved more durable than earlier metals such as copper or bronze and allowed for more productive societies.

Around 1000 BCE, the Quan dynasty was overthrown by the Cheng under the leadership of Yin Huiling. The Cheng dynasty was established shortly thereafter. During this era, Cheng embraced a feudal society of decentralized power. Cheng was then dissolved into a period of civil war in 560 BCE where possibly millions of soldiers fought each other over feudal struggles.

From around 950 to 940 BCE, Calidum plunged into civil war between the Emperor of Calidum and his brother Remansete II. The war ended indecisively resulting in the creation of the first recorded peace treaty to be ever made. Remansete II managed gain control of the archipelego of Pylos and the founding of the Kingdom of Pylos and the Remansete Period.

In Plevapotamia, the Enasan city-states were united into a single states named Iserlon under the rule of King Adamen I in 800 BCE. Around the same time came the Endus, the oldest known sacred texts for the Plecan religion. In 776 BCE, the first recorded Endoric Games were held with participants coming from 16 Pylosan cities. The games was hosted by Remansete IV who had a love of sports.

In 550 BCE, a meteor landed in the Zestoric Sea causing huge tidal waves to hit the coasts of Pylos and Calidum. The event nearly caused the collapse of both civilisations. The event marked the end of the Iron Age and the Ancient Era, and the beginning of the Antiquity Era. 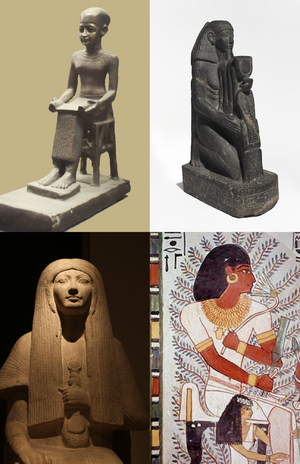 Clockwise from top left:
Philosphers Chisisi, Khons, Omari, and Ur.

The rise of civilisation corresponded with the institutional sponsorship of belief in gods, supernatural forces and the afterlife. During the Bronze Age, many civilisations adopted their own form of religion. Usually, polytheistic Gods, who manifested human personalities, strengths and failings. Early religion was often based on location, with cities or entire countries selecting a deity, that would grant them preferences and advantages over their competitors. Worship involved the construction of representation of deities, and the granting of sacrifices. Sacrifices could be material goods, food, or in extreme cases human sacrifice to please a deity such as in Hoth in Creek religion. Over time, a great variety of religions developed around the world, with some of the earliest major ones being Plecanism (around 800 BCE). The Afran religions trace their origin to XXX, around 1700 BCE.

In Cheng, schools of thought were to dominate their thinking until the modern day. These were Weilism, and Kaoism. The Kaoism tradition, which would attain dominance, looked for political morality not to the force of law but to the power and example of tradition. Kaoism would later spread into the Eyoseoul peninsula and toward Horapon.

In Calidum and Pylos, philosophical tradition, represented by Chisisi, Khons, Omari and Ur, which would later influenced the thinkings of Oranland and much of northern Naphtora in the 4th to 3rd century BCE largely thanks to Calidum, and later Pylosan Imperialism. 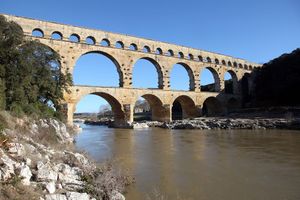 In the history of technology and ancient science during the growth of the ancient civilisations, ancient technological advances were produced in engineering. These advances stimulated other societies to adopt new ways of living and governance. Sometimes, technological development was sponsored by the state.

The characteristics of Calidum and Pylosan technology are indicated by a set of artifacts and customs that lasted for thousands of years. The Calidum invented and used many basic contraptions, such as the ramp, the lever, and the aqueduct, to aid construction processes such as large temples and palaces. The Calidum also played an important role in developing Zestoric maritime technology, including merchant ships, warships and lighthouses. Inventions that are credited to the Pylosans such as the gear, screw, bronze casting techniques, water clock, water organ, torsion catapult and the use of steam to operate some experimental machines and toys. Many of these inventions occurred during the early 6th century BCE. 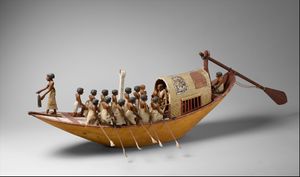 Model of a Calidum Boat.

The history of ancient navigation began in earnest when men took to the sea in planked boats and ships propelled by sails hung on masts, like the Narmar ship from 600 BCE.

Depiction of a Plevapotamian army.

Ancient warfare is war as conducted from the beginnings of recorded history to the end of the Ancient Era.

These new armies could help states grow in size and became increasingly centralized, and the first empire, that of the Enasan, formed in Plevapotamia. Early ancient armies continued to primarily use bows and spears, the same weapons that had been developed in prehistoric times for hunting. Early armies in Calidum and Cheng followed a similar pattern of using massed infantry armed with bows and spears.

Ancient music developed in literate cultures, replacing prehistoric music. 'Ancient music' refers to the various musical systems that were developed across various geographical regions such as PLevapotamia, Hesterath lowlands, northern Naphtora, and Pylos. Ancient music is designated by the characterization of the basic audible tones and scales. It may have been transmitted through oral or written systems. Arts of the ancient world refers to the many types of art that were in the cultures of ancient societies, such as those of Calidum, Iserlon, Creek, Cheng, and Pylos.