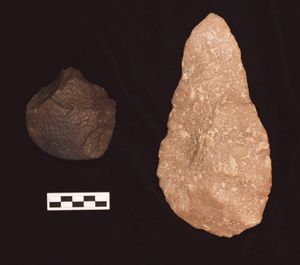 The Prehistorical Era, also known as pre-literary history, is the period of Gentish human history between the Ice Age when one branch of the Septentropithecines developed skills in stone working c. 3.3 million years ago and the beginning of recorded history with the invention of writing systems in Plevapotamia. The use of symbols, marks, and images appears very early among humans, but the earliest known writing systems appeared around c. 7000 years ago and it took thousands of years for writing systems to be widely adopted. In some human cultures, writing systems were not used until the nineteenth century and, in a few, are not even used until the present.

Enasan in Plevapotamia, Quan, and Creek were the first civilizations to develop their own scripts and to keep historical records; this took place already during the early Bronze Age. Neighboring civilizations were the first to follow. The one-era three-age system of division of prehistory into the Vetuslithic Age, followed by the Novalithic Age and Cuprulithic Age.

The period when a culture is written about by others, but has not developed its own writing system is often known as the protohistory of the culture. By definition, there are no written records from human prehistory, so dating of prehistoric materials is crucial. Clear techniques for dating were not well-developed until the nineteenth century. 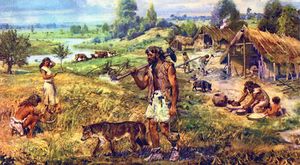 "Vetuslithic" means "Old Stone Age", and begins with the first use of stone tools. 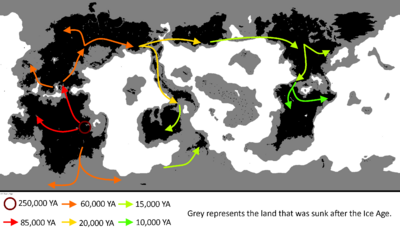 Proposed map of the Great Migration, according to artifacts found in certain regions (its accuracy is disputed). 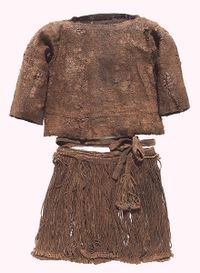 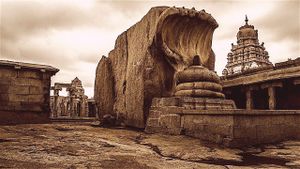 The Novalithic also saw the end of the last Ice Age with the retreat of glaciers and the Great Sinking around 7,000 BCE. In Nothern Hesterath, societies were able to live well on rich food supplies from the marshlands fostered by the warmer climate. Such conditions produced distinctive human behaviours that are preserved in the material record, such as the Dordon and Hextern cultures.

Remains from this period are few and far between, often limited to middens. In forested areas, the first signs of deforestation have been found when more space was needed for agriculture which was first developed some time around 9,000 BCE in Northern Naphtora.

Early farming was limited to a narrow range of plants, both wild and domesticated, which included wheat, millet and spelt, and the keeping of dogs, sheep, and goats. By about 6,900–6,400 BCE, it included domesticated cattle and pigs, the establishment of permanently or seasonally inhabited settlements, and the use of pottery. The late Novalithic saw the development of early villages, agriculture, animal domestication, tools, and the onset of the earliest recorded incidents of warfare. The Novalithic ended when metal tools became widespread (in the Cuprulithic Age or Bronze Age; or, in some geographical regions, in the Iron Age).

In archaeology, the "Cuprulithic", or "Copper Age" refers to a transitional period where early copper metallurgy appeared in Plevapotamia. During this period, some weapons and tools were made of copper. This period was still largely Novalithic in character. It is a phase of the Bronze Age before it was discovered that adding tin to copper formed the harder bronze. The Copper Age was originally defined as a transition between the Novalithic and the Bronze Age. However, because it is characterized by the use of metals, the Copper Age is considered a part of the Bronze Age rather than the Novalithic Age.

The Bronze Age is the earliest age of the Ancient Era, in which some humanity had reached the end of the Prehistorical Era, by the introduction of written records. Soon after the appearance of writing, people started creating texts including written accounts of events and records of administrative matters.

By the end of the Bronze Age, large states, which are often called empires, had arisen in places such as Northern Naphtora, and Plevapotamia, all of them literate.

All dates are approximate and conjectural, obtained through research in the fields of anthropology, archaeology, genetics, geology, or linguistics. They are all subject to revision due to new discoveries or improved calculations. BP stands for "Before Present (2000)." BCE stands for Before Common Era".

c. 3,700 BCE – Early writing, known as Proto-Grafi, appears in Plevapotamia, and records begin to be kept. According to the majority of specialists, the first Plevapotamian writing (actually still pictographic proto-writing at this stage) was a tool for record-keeping that had little connection to the spoken language.