Brem (Bremish: 㐭 bin) is a country in southern Coius. It borders in clockwise order Zorasan, Phula, and Xiaodong. Brem has a population of about 81 million people.

Brem's most distinguishing geographical feature and region is the Bremish basin, which encompasses much of its territory and is where much of its population is concentrated. The Zhuchao flows through the basin and is joined by numerous tributaries. The basin is almost completely surrounded by mountains, though the steepest and most significant are those to the north and east, while the other surrounding plateaus are gentler in elevation. 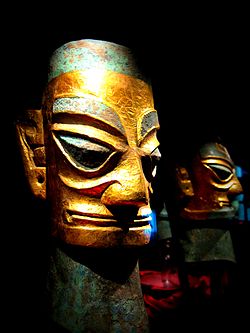 Beginning in the 16th century BCE, bronze-working cultures appeared in the Bremish basin, growing into the Ancient Bremish civilization. Ancient Brem was quite complex, featuring the practice of a detailed animistic religion which held great sway over public life, a precise division of labor, the production of sophisticated crafts, and the construction of unique architecture as well as irrigation projects. It exchanged culturally and commercially with the civilizations of modern-day Zorasan, as well as with ancient Xiaodongese states.

The Xiang dynasty conquered Brem in the 1st century CE, and by the 3rd century it was developed into a wealthy province. It was also at the forefront of trade and other interactions with the Hyndanan and Pardarian civilizations. These factors, combined with Brem's geography and a cultural substrate from the Ancient Bremish, led to the development of a tradition of highly autonomous governors in the area, and a strong regional identity.

In the early 17th century, the overstretch of the Jiao dynasty led to the creation of an effectively independent state known as the Margraviate of Brem, which became a dynamic part of the central Coian trade network. The Margraviate was nominally a vassal to the Jiao and later the Toki Sougunate, and continued to maintain close relations with the Xiaodongese heartland.

During the Baiqiao Revolution the Margraviate was defeated and annexed into the Heavenly Xiaodongese Empire, which sought to reintegrate the area into greater Xiaodong politically and culturally. Despite these efforts, a strong regional identity persisted alongside a disdain for the central government, and an Eucleophilic local intellectual culture emerged in the late 19th century. Beginning in the 1910s, the general Zang Kingzong developed Brem into his personal power base, and hereon its reputation as an 'independent kingdom' was regained. Zang's work was continued by his succeeding generals and officials, who presided over a local government increasingly defiant of Baiqiao's demands.

During the Great War the Bremish clique contributed troops and equipment to the Senrian-Xiaodongese War to preserve their local power. In 1932, with Xiaodong severely set back on all fronts and the death of the Xiaodongese emperor, the clique refused to declare loyalty to the new emperor and the wartime government, instead proclaiming an 'righteous autonomous government' which hereon severed all ties with Baiqiao and declared friendly intent to the Allies. The autonomous government was effectively independent and with the actions taken by it Brem emerged from the Great War without much damage.

After the Corrective Revolution, the Xiaodongese Civil War began in 1936 and much of Xiaodong was plunged into chaos. The Bremish clique, led by Cen Vancen, was well-established enough by this point to simply declare independence in October 1936, founding the modern Bremish state. The new military government comfortably waited out the early years of the war in Xiaodong, until 1942, when the Army of National Salvation attempted to reconquer what was seen as a 'rebellious regional despotism'. After inflicting decisive but costly defeats on the Xiaodongese incursion, the Bremish government secured support from nearby powers who were able to guarantee its independence.

The years immediately after independence was characterized by uncertainty, as the interests of the landowning class clashed with desires of radical top-down reform by the military government, who entered almost open conflict. It was only the threat of Xiaodongese invasion which kept the Bremish political struggles from spiralling out of control; however, by the 1950s even this seemed doubtful. In 1953 the general Zao Kuezu led a military coup and declared an 'elevated state of emergency', intending to massively centralize power in order to modernize the country. However, Zao's oppressive policies soon turned interest groups against him, and in 1960 he was deposed in another coup. In 1964 yet another putsch would occur with the general Ni Xuan seizing the reins of power.

Reflecting on Zao's failures and heavily inspired by a romanticization of Euclea, Ni declared that Brem would follow modernization by 'tracing its causes', subscribing to heavily Eucleocentric and Estmerophilic ideas. Brem was to remake itself in the image of the Euclean states, which manifested as the empowerment of numerous community institutions and political projects that was officially referred to as a 'customary law system'. Amendist social teachings also inspired Ni, who promoted numerous Amendist ideas in a comprehensive propaganda campaign to cultivate values and virtuous behavior. Although Ni resigned in 1985 to run a real estate company, his policies have essentially continued to today and shaped much of modern Bremish politics. Ni's successor Niu Renz turned Ni's experimental administrations into special economic zones that soon became a hub of the interior Coian economy. By 1999 Niu conceded his dictatorial powers and hereon the role of the Leader became a primus inter pares of the Presidium.

By the 2010s Brem was solidly characterized by great political diversity and a highly open economy.

Brem is a federal timocratic republic. Government representation is based on a concept known as 'macro-shareholding' or 'company of society', where the Bremish state is treated akin to a joint-stock company where only actors with vested stakes and interests in it are permitted voice and power. Enfranchisement, voting power, and other political privileges are determined by wealth and property ownership. The constituents of Brem are regarded as principally anterior to the federation and thus the government's existence is principally contingent on their agreement and consensus.

Property owners directly vote to elect the Presidium, who then appoints a Leader, who is the head of state and government. The Leader has wide-ranging powers but is subject to constant censure and examination by the Presidium and in principle the general aristocracy, and functions as a far more restrained and limited figure in practice.

Brem has a bicameral legislature, the Parliament, with an upper house composed of allocated seats and a lower house with elected members. Voting and running for office is restricted to adults who exercise 'sovereignty' over land possessions (i.e. allodial ownership). This means of Brem's 81 million inhabitants only around 1.5 million are eligible for political participation. This system also opens foreigners who own property in Brem to voting and other political processes. The legislature adopts bills and policies that are then the Leader's duties to execute and implement; it functions quite similarly to most legislatures in the world.

Brem is divided into numerous federal constituents which vary greatly in type, government, and laws. These units range from aristocratic estates, to corporate holdings, to possessions of temples and other religious institutions, to the property of mutual aid associations, to entire subdivisions managed for purposes of experimental political science. Their boundaries are often fluid and changing, but well-defined, at least textually. Individuals who possess allodial titles no matter how small may technically be federal constituents in themselves, but besides very affluent and powerful exceptions, most confederate into larger associations.

Most of the vast privileges federal entities enjoy are not significantly exercised due to realistic constraints of local interactions and are mostly nominal guarantees of their 'sovereignty', mainly the power of secession. In Bremish political philosophy the actual telos of this structure is to maintain the vigor of the cultural institutions underlying these sovereignties.

Brem is a member of the Council for Mutual Security and Development, and thus enjoys close relations with Phula and Senria. Relations with Xiaodong have generally been unfriendly due to concerns of Xiaodongese expansionism possibly targeting a reintegration of Brem, although there has been increased commercial activity between the two countries in recent years. Friendly terms are maintained with most countries in Euclea and the Asterias.

The federal authority reserves for itself the right to exclusively dispose of military force. Brem's military is mostly composed of militias trained by locality and paid for by local gentlemen, or private armies raised by affluent individuals who can equip them better. To ensure an effective defense against Xiaodong the role of local entities in assembling the military has mostly been reduced to providing trained personnel and sometimes equipment when called upon by the federal government to fill in pre-designed units that then perform tasks as necessary.

Brem has a highly open economy with high levels of foreign investment.

The country has a large tourism and hospitality industry. Its most famous and largest food-and-drink brand is Tiansangnao, a hot pot restaurant chain.

Retrieved from "https://iiwiki.us/mediawiki/index.php?title=Brem&oldid=157607"
Category:
Hidden categories:
This page was last edited on 24 January 2020, at 02:18.
Privacy policy
About IIWiki
Disclaimers