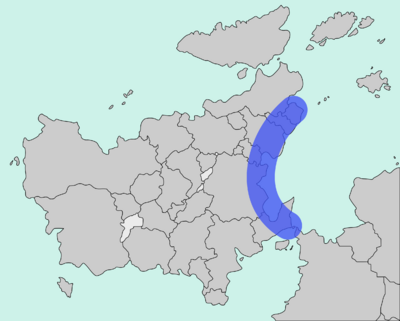 The extent of the corridor as defined by A.J. Cullins.

The Coastal Corridor, also known as the Euclean Supercity and archaically as the Eastern Engine, is a pattern of discontinuous urban development and overlapping metropolitan areas which stretches across the coast of eastern Euclea along the Gulf of Assonaire[1]. The corridor has an estimated population of 120 million, and it has been identified as a megalopolis[2][3]. Containing many major urban areas and economically dynamic regions, the corridor forms a core component of the eastern Euclean economy[3][4].

The corridor is widely believed to stretch from the Bojnersteden conurbation in the north, through the Borish capital of Newstead and the Dunwich-Westhaven conurbation to the South Scitterland conurbation, through to Greater Morwall, down through Bouley and the Hennish cities of s'Holle and Zilverzee, across Maredoux and the sprawling Verlois metropolitan area, through Monroial to the Paretian cities of Encerosa and Herança, finally through to the conurbation of Precea and the city-state of Montecara in the south[5].

The corridor was first identified by Estmerish sociologist A.J. Cullins in 1996, who coined the term in reference to levels of urbanisation between Morwall and Verlois[1]. Cullins' research and claims were controversial, and the extent or even existence of the corridor has been the subject of debate within the fields of ekistics, human geography and sociology[6].

Historians have pointed to the Eastern Engine of the 18th and 19th century industrial revolution as a predecessor to the corridor[7].

The term Coastal Corridor was officially coined in 1996 by A.J. Cullins, an Estmerish sociologist and urban studies professor at the University of Morwall and it's nascent Reynolds Urban Studies Foundation. Cullins believed he had identified a pattern of urban development that spread across the eastern coast of Euclea, after he noticed the high levels of urbanisation between Morwall and Verlois, two first-rate cities with large metropolitan areas and formidable economic pull[1].

Cullins noted that the key urban areas between the two first-rate cities, such as Bouley, Maredoux and s'Holle, had significant metropolitan areas of their own, and that these areas broadly overlapped[1]. Cullins went on to claim that this was evidence of wider east Euclean urban connectedness than was previously considered[4][5]. He took his research to the World City Studies Institute, which coined the term Euclean Supercity both in reference to the corridor and to the economic dynamism and power that the region represented[3].

In 2001, Gaullican geographer Adam Ménard expanded on Cullins' claims by identifying the Supercity as one of the world's growing megalopolises, alongside the Solarian Sun Belt and North Sea Bubble in Euclea, the Keisi Megacity, Shangean Triangle and Rongzhou Supercity in Coius and the Western Seaboard in Asteria Superior. In this respect, the Coastal Corridor was considered only mid-sized for population compared to other megalopolises, but ranked highly on economic measures[8].

The idea of the Coastal Corridor was officially recognised by the Euclean Commission in 2007[2].

After the idea was accepted by the Euclean Commission in 2007, it has gone on to inform economic development policy in the Euclean Community institutions as a whole[2][3][4].

The concept was a key part of the reasoning behind the approval of the high-speed rail network between Morwall and the South Scitterland conurbation[3][4].