The University of Morwall is a collegiate public research university centred in Morwall, Estmere. The university recieved its royal charter in 1307, having been first established in 1298. This makes Morwall one of the oldest universities in continuous operation, and the third-oldest university in Estmere. It is one of the three ancient universities which make up the prestigious Molbridge triangle, along with Damesbridge and Tolbury.

As a collegiate institution, the University of Morwall is comprised of 29 constituent colleges. Every student is a member of one college. The colleges are semi-autonomous and self-governing, with their own internal structures and actitivies. The colleges themselves can be further divided into 21 ancient colleges, which provide a well-rounded education, and 8 collegiate institutes, which are structured around a single subject focus. The university is pluricentric, without a main campus, with facilities and buildings scattered throughout the city. It is one of Euclea's wealthiest universities by endowment size, with a total income in the fiscal year ending 2020 of €6.162 billion, of which €1.107 billion was from research grants.

The university has one of the largest academic library networks in the world, home to over 15 million books. Morwall is by far the largest university by number of students in Estmere, with a student body totalling just over 60,000 students. The majority of these are undergraduate students, but Morwall also awards the highest number of doctoral degrees in Estmere. It is a founding member of the 1994 League and the ET10.

Morwall has produced a number of notable alumni, providing 6 post-war prime ministers of Estmere, many other heads of state and government across the former Estmerish Empire including a number of Fathers of the Nation, and a number of renowned scientists, politicians, lawyers, philosophers.

The University of Morwall was founded for the most part in 1298, when it began teaching in the growing capital of Morwall. The university was founded by scholars from the prestigious universities at Damesbridge and Tolbury, who had fled to the capital following similar altercations with the Duke of Damesbridge and the Earl of Tolbury respectively, as part of the wider Counts' Rebellion stage of the Great Anarchy. The scholars petitioned King Clovis I for protection, a request which was granted. Eventually, enough scholars had gathered in Morwall to form the core of a new university, under the King's protection. The university was granted a royal charter in 1307, officially recognising it, granting it exemptions from taxes, and granting it the right to discipline its members.

The discovery of the Asterias by Assim Asteris in 1488, and the Asterian exchange which it brought about, greatly impacted the university. This was combined with the rinnovosi in Vespasia, a series of advances in art, philosophy and literature. Though the rinnovosi were separate events, and limited to modern-day Etruria, their influence could be felt at Morwall, with liberal arts and the classics increasingly taught. Over time, scholasticism and its associated methods of teaching and subject foci were eventually abandoned, as the university transitioned to more modern forms of education.

The Amendist Reaction had an even greater impact on the university. It became a hotbed of non-conformism, and gave rise to a number of new Amendist sects. The embrace of Amendism led to the flight of a number of Catholic scholars southward, with many eventually settling at the universities of Rayenne and Povelia. The university fell out of favour with the monarchy in the 16th century, largely for harbouring non-Communion dissidents, and lost a significant proportion of its funding as a result. The university recovered by the 17th century, and along with the two other ancient universities codified its statutes.

The Academy of the Natural Sciences, the first collegiate institute, was founded in 1907.

Morwall grew rapidly at the onset of the Industrial Revolution, emerging as a major urban centre and a manufacturing powerhouse. In this environment, the university changed as well. While Damesbrigde and Tolbury were situated in university towns, Morwall took advantage of its urban status. It massively expanded its programs in the natural sciences, particularly in chemistry in which it soon became a world-leader.

This coincided with the establishment of the first of the collegiate institutes, the Academy of the Natural Sciences, which aimed to provide a good education in the natural sciences that was seen to be lacking at the ancient colleges. After the graduation of Albrecht Döuer, the Döuer Institute of Social Science was also established, providing one of the first formal recognitions of the social sciences. The Institute soon became a centre for psychological research.

The university also gradually loosened its entry requirements; the hefty tuition fees were dropped significantly a number of times, women were admitted starting in 1888, and a number of grants became available for the brightest minds of the working class. The aim was to create a university where intelligence, rather than material means, determined admission. This aim was not truly fulfilled until the post-war period. The size of the student community grew gradually throughout the 19th century, and exploded in size following the Great War. The academic staff also increased in number, bolstered by academics who had fled from functionalism and authoritarian republicanism. Despite its growth, the university remained renowned as a prestigious institution.

Women were prevented from attending Morwall until 1888, when the university by-laws were updated to allow for the admission of upper class women at the behest of Sophia of Werania and king Edward V. The first women's college was founded in 1893 as St Chloe's College, named for the saint of the same name, and this was quickly followed by Our Lady's College in 1897. These colleges became coeducational starting in 1975, but still retain unique characters. Male privilege at the university persisted, however, until after the Great War.

In 2020, the University of Morwall recorded a total student body of 60,417 - not including distance-learning or transnational students - making it the largest university in Estmere by enrolment by a significant margin. Of this body, 42,891 were undergradute students, while 17,526 were postgraduate. There is an additional body of transnational students numbering over 40,000. 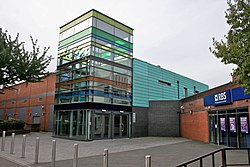 The Nexus is the main administrative centre of MUSU.

Students at the University of Morwall are represented by the Morwall University Students' Union, also known by its acronym MUSU. As with other students' unions in Estmere, MUSU aims to represent students at the university and to act on their behalf, while also providing services to the student body. These services include the operation of two nightclubs, three bars, one cinema and a number of other entertainment venues across the city.

The students' union has separate branches for each of the colleges, but the union as a whole is a distinct entity. The union is led by the Union Council, which is comprised of seven full-time officers and twenty part-time officers, all of whom are elected and are responsible for representing a specific section of the student body. Participation levels in union elections tend to be low, and the union has a reputation for getting involved in national political disputes. 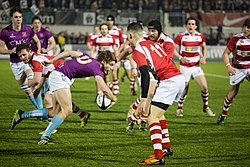 The rugby match between the Morwall Maniacs and their rivals the Barber Socks is a notable event in Morwall varsity.

Sport at Morwall is organised by the Morwall University Students' Union, which runs a total of 74 sports clubs. Many of these clubs are well-known, such as the Morwall Maniacs, the university's rugby club. Other notable clubs include the UOM Boating Club, the UOM Cricket Club, the UOM Football Club and the renowned UOM Queens, Morwall's chess club. The clubs have been mixed-sex since 2009, with men's and women's sections of each club.

One of the newest sports clubs is the Morwall Magpies, an esports club dedicated to the video game Avatar. They narrowly failed to qualify for the 2021 Avatar World Championship. As a result of their near-miss, the team has seen increased funding from MUSU in the hopes of qualifing in 2022.

Morwall's clubs compete in inter-university varsity match fixtures with other Estmerish univerisites as part of the Estmere Varsity Sports League (EVSL). The most infamous fixture of this competition is the annual rugby match between the Morwall Maniacs and their rivals the Barber Socks of Morwall Metropolitan University, in a varsity wimney match between Morwall's largest further education providers. The university maintains world-class sports facilities across the urban campus, including a swimming centre at Guildley Green, an athletics ground and sports centre at Senriatown Common and an all-purpose gym at the city centre.

The university mascot is Stewie the Spectacled Stag, a bespectacled golden stag. The stag is an Estmerish national symbol with royalist connotations. The ornament was first gifted to the institution by Prince William in 1914 to celebrate the historic royal patronage of the university.

Morwall is home to two prominent student newspapers, the oldest of which is the Marinite, which was established in 1939 and has been edited by a number of prominent alumni, including Patricia Flowers, Robert Howard, Alan Pattinson, Heidi Reid, Brooke Richards, and Gopal Singh. The Marinite prints on a weekly basis, one of the few student papers to do so. The other prominent student newspaper is the Morwall Sports Gazette, which focuses on university sports. Alongside the Marinite and the Gazette, there are a number of other smaller newspapers, magazines, and journals.