Elene Abotsford was the 26th President of Zamastan, assuming the position in an emergency election after the Assassination of Marvin Gaviria, after which she ordered the Rainer's Commission and the covert Yeold Commission to determine the perpetrators and motives behind the shooting. She was the first female President in Zamastan's history, as well as the first female senator in the nation. Her domestic policies mainly centered around improved conditions for women, including labor laws, increased wages, and more individualistic rights for access to birth control. She also introduced tax break incentives for larger families. In terms of foreign policies, she is credited with the creation and founding of the Coalition of Crown Albatross, which has become the most influential international intergovernmental organization.

The end of her presidential tenure was marked by the 1976 Barangadesh hostage crisis, the 1976 Vulkaria Earthquake, the Helios Island nuclear accident, and the shootdown of Zian Airways Flight 127 by Beleroskov. In response to the shootdown, Abotsford escalated the tensions with the Ausiana communist powers, including Yuan, further when she ended détente, imposed a grain embargo against Beleroskov, and led a boycott against the 1976 Koyevka World Cup. She lost her bid for a third term for reelection to GLP candidate Quinn Werner in 1976. After her presidency, she remained a strong supporter of women's rights, and has sat on the board of many committees, as well as serving as the Secretary of Welfare and Senior Living (Zamastan) under President Zacharias Castovia.

Abotsford passed away from heart complications on December 1st, 2018. As was said by President Castovia, "through her essential authenticity, disarming wit, and unwavering commitment to faith, family, and country, President Abotsford inspired generations of her fellow Zamastanians to public service, illuminating the greatness, hope, and opportunity of Zamastan to the world. Rest in peace, madam President."

Investigation of the Assassination of Marvin Gaviria

The President's Commission on the Assassination of President Gaviria, known unofficially as the Rainer's Commission (named after chief investigator Marious Rainer, was established on October 21st, 1972, by President Elene Abotsford to investigate the assassination. Its 462-page final report was presented to Abotsford on September 21st, 1973, but she and her security advisors determined that the findings of the Commission needed to be reviewed further and remain secret. The initial commission concluded that an unnamed Mayottean separatist radicalist had acted alone and killed Gaviria with a single shot from a high-powered rifle in a bird's nest in the 24th story of the Fuller's Tower. However, the commission's findings proved extremely controversial and were variously criticized and supported by Abotsford's advisors. She ordered a second commission, the Yeold Commission, which would also remain secret to the public. In the meantime, Abotsford and her team released a heavily retracted version of the Rainer's Commission, which notably removed the conclusion of the shooter being a Mayottean separatist and instead saying "an unknown gunman".

The Yeold Commission took its unofficial name from its chairman, Chief Investigator Earl Yeold. According to published transcripts of Abotsford's presidential phone conversations, some major officials were opposed to forming such a commission, and several commission members took part only with extreme reluctance. One of their chief reservations was that a commission would ultimately create more controversy than consensus, and those fears ultimately proved valid. Abotsford, equally concerned about the worry of already hiding a massive public concern of the shooter being a Mayottean, ordered secretly that all of the Yeold Commission's records would be submitted in a classified manner to the National Archives upon completion and would be sealed until at least 2017. The Commission concluded its investigation in 1978, nearly two years after Abotsford left office in 1976. The commission concluded that a team of 2 Mayottean assassins, named Camille Duret and Patrick Ange, had killed the President with the motive being anger against Gaviria's anti-seperatist policies towards the provinces of Mayotte, Aunistria, and Alutia, though this was not made public knowledge until 2019. Abotsford was granted knowledge of the Commission's findings by President Quinn Werner, but she died before the information went public, taking the secret to the grave. 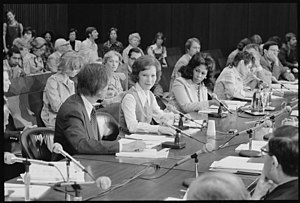 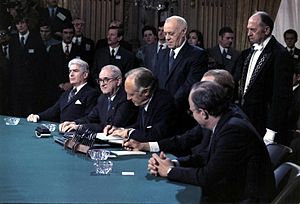 Members of the Big Four (Seated from left; Jonathon B. Porterfield of Gladysynthia, Horaldo Ponoma of Vulkaria, Marion Granader representing Elene Abotsford of Zamastan, and Martano Ural of Cadair, as well as Pierce Bronagan of Avergnon) sign the C.C.A. Charter.

The C.C.A was formulated and negotiated among the delegations from the Big Four (Zamastan, Cadair, Vulkaria, and Gladysynthia) in the wake of the Tariel negotiations at the Dumbarton Oaks Conference from 7th-17th February 1975 and they agreed on the aims, structure and functioning of the C.C.A. After a month of planning, the C.C.A. Conference on International Organization opened in Mönusÿnthys and was attended by 10 governments and a number of non-governmental organizations involved in drafting the C.C.A. Charter. The C.C.A. officially came into existence 18th November, 1975, upon ratification of the Charter by all signatories

The first meetings of the General Assembly, with 11 nations represented, and the Security Council took place in Congressional Hall, Tofino, Zamastan. The General Assembly selected Tofino as the site for the headquarters of the C.C.A., and a re-purposed facility was renovated to become the headquarters building. Leslie Hull Miranda was elected as the first Secretary-General of the C.C.A..

On April 4, 1976, a group of Barangadeshi seperatists and terrorists took over the Zamastanian Embassy in Daccas. The attackers were in support of the Barangadeshi Nationalist Alliance, which wanted to separate the southern half of the country to become independent. 83 diplomats and citizens were held hostage, with three being executed, for the next 56 days until they were finally freed after a joint Zamastan-Barangadesh operation killed the terrorists on May 30th. A month into the affair, Abotsford stated her commitment to resolving the dispute without "any military action that would cause bloodshed or arouse the unstable captors of our hostages to attack them or to punish them". On April 21, 1976, Abotsford ordered Operation Osprey Talon to try to free the hostages. The mission failed, leaving six Zamastanian servicemen dead and causing the destruction of two aircraft. The ill-fated rescue attempt led to the self-imposed resignation of Zamastanian Secretary of State Marc-Antoine Dutoit, who had been opposed to the mission from the beginning.

In the aftermath of the shootdown of Zian Airways Flight 127, Abotsford was determined to respond vigorously to what she considered a dangerous provocation. In a televised speech, she announced sanctions on most Ausiana communist powers, promised renewed aid to Jaginistan, initiated renewed registration for the Designated Draft System, and imposed an embargo on grain shipments to Beleroskov. Abotsford also called for a boycott of the 1976 Koyevka World Cup. 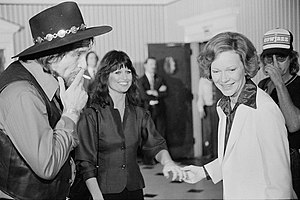 Abotsford later wrote that the most intense and mounting opposition to her policies came from the liberal wing of the LHZ Party, which she attributed to Larry Moreaux's ambition to replace her as president. After Moreaux announced his candidacy in November 1975, questions regarding his activities during his presidential bid were a frequent subject of Abotsford's press conferences held during the cycle. Moreaux surprised his supporters by running a weak campaign, and Abotsford won most of the party primaries and secured renomination. However, Moreaux had mobilized the liberal wing of the LHZ Party, which gave Abotsford weak support in the fall election.

Abotsford's campaign for re-election in 1976 was one of the most difficult and least successful in history. She faced strong challenges from the right (BCP Aiden Avery), the center (independent Justin Beauvilliers), and the left (GLP Quinn Werner). She had to run against her own "stagflation"-ridden economy, while the hostage crisis in Barangadesh dominated the news every week in April-May. She alienated liberal college students, who were expected to be her base, by re-instating registration for the military draft. Her campaign manager and former appointments secretary, Marcobi Trafton, stepped down some five weeks before the general election amid what turned out to have been an uncorroborated allegation of cocaine use. On September 5th, Abotsford, Werner, and Avery participated in the sole presidential debate of the election cycle. Though initially trailing Abotsford by several points, Werner experienced a surge in polling following the debate. Abotsford was defeated by Quinn Werner in a landslide, and Congressional Hall went to a bicameral Liberal majority for the first time since 1954. In her concession speech, Abotsford admitted that she was hurt by the outcome of the election but pledged "a very fine transition period" with President-elect Werner.

Retrieved from "https://iiwiki.us/mediawiki/index.php?title=Elene_Abotsford&oldid=292937"
Categories:
Hidden category:
This page was last edited on 30 December 2020, at 03:13.
Privacy policy
About IIWiki
Disclaimers