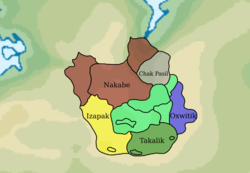 Administrative and political division of the First Mutul before the Revolt, with the name of the main Ajawils indicated as well as their factions

The Nakabe Revolt, also known as the Nakabe Civil War, is an event in Mutulese history that lasted from 370 BC to 300 BC and saw the end of the Paol'lunyu Dynasty as well as the destruction of Kaminyajunlyu. It ended with the defeat of the Ka Dynasty of Nakabe, and the establishment of a new Mutul : the Chaan Dynasty.

The consequences of the Nakabe revolt are numerous, as more than any other events before, it forced to define the role and the powers of the K’uhul Ajaw, and forced the centralization of the various competing Mutals' administrations and military.

Modern historians tend to consider the Nakabe Revolt as the true “birth” of the modern concept of Divine Monarchy, and the Chaan Dynasty that followed as the true start of the Mutul as we know it.

Informations on the events of the revolt and the civil war that followed are rare and heavily influenced by the propaganda of the winning Chaan Dynasty. The main sources of informations are the records of Sakal Witz and its priesthood, and the many stelae and other monuments erected by the various competing Mutals to commemorate their victories and accomplishments.

By the start of the 4th century BC, the Paol’lunyu Dynasty had lost much of its powers. They only controlled a relatively small strip of land between Kaminyajulyu and Sakal Witz, but the Marches of their Mutul were out of their jurisdiction, as local aristocratic families had taken or retaken their hold on the borderlands and, by extension, on the military.

The Yajawil of Nakabe had been established around 680 BC (Long Count: 6.3.8.4.13) to serve as the Northern March of the Mutul, protecting the wealthy valleys of the Highlands against K’olti or Yakalmek raids. The charge of this new colony was left to the House of Kamat'e. Nakabe grew to become a successful Ajawil and one that quickly became an important player in the political spheres of the Extensive Period. they subjugated the K'ol kingdoms and tribes and obtained tributes from them, while also striking a secret alliance with the Yakalmek Kingdom, allowing the city to develop its economy.

During the Extensive Period, Nakabe wasn’t the only Ajawil acting autonomously from Kaminyajunlyu : Oxwitik, Izapak, and Takalik, had all obtained a great level of independence from the central crown and were now all in competitions against one another, seeking an even greater autonomy and more wealth.

Start of the Revolt

Ek Balam became the Nakabe Ajaw in 376 BC. 6 years later, he refused to pay his tribute to the K’uhul Ajaw, proclaiming his independence. On May 17, 370 BC, Nakabe and Kaminyajunlyu fought in the battle of Xubih. It ended in the complete victory of the rebellious Ajawil, with the capture of the K'uhul Ajaw and of his generals. Monuments erected by victors in their capital city but also on the location of the battle clearly depict the sacrifice of the Divine Lord. Encouraged by this victory, the Nakabeians pushed into the Central Highlands and laid siege to Kaminyajunlyu. During a Star war, they managed to overrun the Paol'lunyu capital, destroy its walls and monuments, loot the royal treasure, and sacrifice the remnants of the royal family. October 31, 370 BC is thus recorded as the end date of the First Dynasty of the Mutul. Following his surprising victory, Ek Balam proclaimed himself as the new K'uhul Ajaw, chosen by the gods.

Following the proclamation of the new dynasty, both Takalik and Izapak declared themselves independent states, also taking the title of K'uhul Ajaw to make sure none could claim to be their superior. Meanwhile, Oxwitik was on the loosing side of a war against the Lenca people, a war that would prove to be the demise of the Eastern Ajawil, and it didn't proclaim a new dynasty of its own. Only three dynasties thus competed either to control the others or to protect their sovereignty : the Ka, Hunal, and Syhij Dynasties, sometime called the Second, Third, and Fourth Divine Dynasties of the Mutul respectively.

In 369 BC, the Ka Dynasty launched a second campaign, with the aim of securing the jade and obsidian mines of the Highlands still under the control of cities like Yaxkan. They managed to gain a few major battles and even to defeat Sakal Witz, taking over most of its territories and forcing it to pay an annual tribute to the Ka.

The Hunal Dynasty answered positively to Yaxkan call for help and directly entered the war against Nakabe. They managed to lift the siege on Yaxkan and push back the Nakabeians, but neither side would be able to take the upper hand in the following years of conflict.

War of the Northern Plateau

While Takalik and Nakabe started to intermittently wage wars against each others for the control of the Central Highlands, a new front was opened in the Northern Plateau. This region has been hotly contested between Izapak and Nakabe, even prior to the latter's revolt. By annexing the Ajawil of Yux, the Ka Dynasty changed the balance in the region and their K'uhul Ajaw felt confident enough to resume the war against Izapak.

To resist, Izapak levied large armies, supplemented by Chi'kinli mercenaries, against the professional forces of Nakabe. It also reached out diplomaticaly to Takalik, founding the "Anti-Nakabe Coalition" as it is called by the historians. All of these allowed Izapak to hold against Nakabe, even if it never managed to gain momentum and go on the offensive beyond a few raids launched by their Chik'inli allies that had no long-lasting effect.

The K'uhul Ajaw of Takalik, Yuknoom Chen, died in 362 BC. His underaged son, Yoopat Hix, inherited the throne, but his young age led to the court believing he was not fit for a ruler just yet. The problem is that they also feared the consequences a regency would have on the ongoing conflict and they ended up looking for a more millitary and experience leader. They chose Tajoom Ti Chan, brother and general of Yuknoom Chen and invited him to take the throne for himself.

The same year, Tajoom Ti Chan marched on Takalik and deposed his nephew. However Takalik's allies, like Izapak refused to recognize Tajoom Ti Chan and called for the reinstallment of Yoopat Hix. The diplomatic crisis cumulated with the sacrifice of the young deposed Ajaw by his uncle.

The years that followed were not easy, as Tajoom Ti Chan, distrustful of the courtesans that put him in power, did his best to reduce their influence, and gave more power to the military commanders, loyal to him alone. Dwindling trades with Izapak led to episodes of famines and popular revolts. Tajoom even led campaigns against Izapak to try and alleviate the situation by conquering new lands, to no avaiL. Tajoom Uk’ab succeeded his father, and the Takalikeses warlords took the opportunity of the transition to raise their own powers, to the point of becoming autonomous from the royal court, some of which even started to plot the establishment of their own Dynasties.

On September 22 349 BC, a successful Star war led by Nakabe cumulated with the destruction of Takalik. The capture and sacrifice of most of the royal court and of the K'uhul Ajaw by the Nakabeians marked the end of the dwindling Hunal Dynasty. 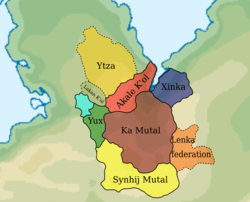 Despite their victory the Ka Dynasty was unable to keep the Southern Hills under their control. Four years after the destruction of Takalik, they had completely left the region which de-facto fell under Izapak's control.

Meanwhile back in the north, some vassals of the Ka grew tired of the never ending warfare. the aristocracy of Yux notably was angered by the constant levies and taxes demanded by Nakabe for their wars in the south, while they left the Yakalmek Kingdom, their nominal ally, send raid expeditions against their vassals and trade roads that they couldn't defend, being too busy elsewhere.

After the abandon of the Southern Hills, the Yux Yajaw and the Synhij K’uhul Ajaw secretly contacted one another and started to plot against Nakabe.

Iztam K'an Ahk, Ajaw of Yux, was considered to be an oracle even beyond the borders of his kingdom. Possibly an epileptic, he reported to have a vision of Chaak decapitating a sky-snake over his head. He interpreted the dream as a sign that Chaak had abandoned the Ka Dynasty and chosen his family to be the next vessels of the Blood of Chaak. He then proclaimed himself to be a K'uhul Ajaw and independent from Nakabe.

The rebellion had mixed results : it received help and support from Izapak, which allowed the Ajawil to survive Nakabe's punitive expedition despite the immense damages provoked by the plunders. Itzam K'an Ahk also managed to defeat the Yakalmek Ajaw in battle. Thus, their military successes, the Ka Dynasty couldn't conquer back the rebelling city and the punitive expeditions proved to be fruitless. The rebellion of Yux was a turning point in the conflict, marking the moment Nakabe began to loose its proeminence over the war-torn Paol'lunyu Mutul.

On March 11 332 BC, Chak Tok Ich’aak, K'uhul Ajaw of the Synhij Dynasty, died without heir. A succession crisis began, but Itzam K'an Ahk, with the support of the Izapakese court, managed to secure the throne for Chak Tok Ich'aak's eldest cousin, Lady Ek Janab. She then married Itzam K'an Ahk's son, Wabak'el Chaan, solidifying the alliance between the two kingdoms.

The rest of Itzam K'an Ahk's reign was spent trying to consolidate his family's rule over both Yux and Izapak, while also pushing back the many attempts of the Ka Dynasty to profit from this period of confusion to conquer more lands. In 327 BC, a Star war started by Itzam K'an Ahk managed to reclaim Sakal Witz from Nakabe, an important symbolic victory that would conclude his reign as the K'uhul Ajaw of Yux would die soon after. With the help of veterans warlords and generals from both Yux and Izapak, Wabak’el Chaan continued what his father started.

Following the conquest of Sakal Witz, the Yux-Izapak faction encouraged other cities of the Highlands to rebel against Nakabe. Many did, assured that the "Divine Couple" would support them militarily, which they did. It would take 10 years for Yux-Izapak to definitively take control of the Central Highlands, but they ultimately did it.

Nakabe, left greatly weakened by this decade of warfare, was at the mercy of an attack from its rival, which came in 315 in the form of a Star war led by Wabak'el Chaan himself. They captured the last K'uhul Ajaw of the Ka Dynasty, his direct family, and his court, and sacrificed them. Nakabe itself was destroyed and its population deported elsewhere.

Yux and Izapak remained in a co-dominion for the rest of their respective monarchs' rule. Wabak'el Chaan took the opportunity to finish the last allies of Nakabe, such as the Yakalmek Kingdom and the K'ol. One of its last great campaign was against the Lencas in the east, retaking the old city of Ox Witik from them and re-establishing it as a Yajawil led by one of his sons.

In 300 BC, Wabak'el Chaan died and his son Yax Chaan Ahk succeeded him on the throne of Yux. The same year, his mother abdicated in his favor. He then proclaimed the start of a new Dynasty : the Chaan Dynasty, which is where the Mutuleses chronicles place traditionaly the end of this period of division.

Retrieved from "https://iiwiki.us/mediawiki/index.php?title=Nakabe_Revolt&oldid=121682"
Categories:
This page was last edited on 23 October 2019, at 20:40.
Privacy policy
About IIWiki
Disclaimers