Takalik, is the provincial capital of the Yajawil of Nojkabal and one of the oldest continuously inhabited city of the Mutul, alongside Sakal Witz. It's main ethnicties are the K'iche, Mam, and the Yok Kancheb. It's estimated population is around 400,000 people.

Located on the Southern plateau of the Central Highlands, it is the largest city of its Yajawil and one of the last large cities on the road to K'umakaj. Historically, the city was located on a ridge running north–south, bordered to the west by the Nima River and to the east by the X-chay River. The Nima river was especially important historically, as it was the main trade road between the Southern plateau and the Central Highlands to the north.

First settled around the second millenium BCE, it became one of the major cities of the Paol'lunyu Dynasty and then was the capital of the Hunal Dynasty. It would remain an important trade hub for the Chaan Dynasty and its easily defensible position and control over a region agriculturaly rich made it a sought-after stronghold during the period of crisis. It would slowly loose in importance during the K'uy Dynasty, but the conquest of the Mutul by the Ilok'tab made it an important junction between the K'uhul Ajaw in its capital of Kumakaj and its northern possessions, until the court migrated to K'alak Muul.

In modern days, Takalik has re-emerged as an important cultural, industrial and educational centre of the central-southern region.

Takalik, meaning "Standing" in K'iche, is the name that was given to the city by the southern invaders who discovered it for the first time. It has since then become the official name of the city. It's glyph-emblem, representing a moon goddess and a rock, is read as "Ab'j Xjaw" ([ʔaɓχ ʂχaw]), "Moon rock" in Yok kanb'itz, the oldest language from the region still spoken in modern days.

was built in a strategic site on a ridge running north–south, descending in a southwards direction, approximately 600 metres above sea level. This ridge is bordered on the west by the Nima River and on the east by the X-chay River. Because of its original situation, Takalik dominated over an important river crossing and other possible roads, which more than likely played a role in the foundation of the city.

It's located in an ecoregion classed as subtropical moist forest. The temperature normally varies between 21 and 25 °C. Takalik's region generally has a pronounced dry season when compared to other regions of the Mutul, but with high annual rainfall, between 2 to 4 millimetres with an average annual rainfall of 3,3 millimetres.

The changing styles of architecture and iconography suggest that the site has been occupied by changing ethnic groups. The archaeological finds of the deepest stratas presenting proofs of human habitations suggest that the population may have been affiliated with the culture named in the Mutuleses chronicles as the Chik'inli or "Westerners". Around 1500 BCE, the "Western" art styles were exchanged for Paol'lunyu styles. Presumably, that shift occured because of an influx an influx of ethnic "Mutun" people, a population change also hinted at in the surviving chronicles of the period. The Yok Kancheb consider themselves the descendents of these first Mutuleses settlers. 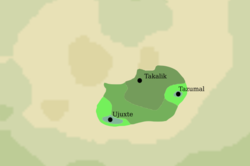 Growth of Takalik's territory during the Paol'lunyu Dynasty. The cities of Ujuxte and Tazumal were only fully integrated to the Ajawil during the Nakabe Revolt, but had become de-facto vassals long before during the Extensive Period

Before coming under the Paol'lunyu's domination, Takalik was a vassal state of Ujuxte, another important city of the Southern Hills at the time. Around 1180 BCE, the leader of the city abruptly changed, and the Chik'inli leader, possibly blood-related to the Ujuxte Ajaw, was replaced by a culturally-Mutulese lord. This rebellion of the Mutulese majority of the city led to a serie of bloody wars between Takalik and its ex-sovereign. The situation was resolved on Takalik's favour after they called Kaminyajunlyu, then a rising power in the Central Highlands, for help. Following this victory, Takalik became a vassal of Kaminyajunlyu and was free to expand its domination over the Southern Hills, taking Ujuxte's place as the local power.

During the first half of the Paol'lunyu Dynasty, Takalik grew considerably but remained a loyal subject to the K'uhul Ajaw. It was originally one of a series of sites that were important commercial, ceremonial and political centres. It is apparent that it prospered from the production of cacao and from the trade routes that crossed the region.

At the time, Takalik covered an area greater than 4 square kilometres. The early style of monument at the site is closely linked to the style of monument at Kaminyajunlyu, showing mutual influence. This interlinked style spread to other sites that formed part of the extended trade and political network of which these two cities were the twin foci. Highly decorated boulders seems to have been a staple of the Takalikese style of the time. It's during that period that the Pink Pyramid was first erected over a sacred plateform of the previous era, to serve as a tomb for the Ajaw K'utz Chiman, possibly the Ajaw that led the rebellion and the independence wars against the city's Chik'inli overlords.

Stelae representing a Pitz player offering an head to a Sun Goddess. It has been found in the ruins of Takalik and dated back to the Extensive Period of the Paol'lunyu Dynasty

Characterized by an accelerating decentralization and collapse of Kaminyajunlyu's authority, the Extensive period was a time of prosperity for Takalik, and it slowly came to be seen as the equal and most direct competitor to Kaminyajunlyu with disputes being the K'uhul Ajaw and the Uhk'in Tun Ajaw ranging from the access of Takalik to the precious obsidian, the payment of tributes to the central throne, the ritual duties of either lords, and even the ownership of the marketplace of Noj pasil, the "Southern Gate" of the Paol'lunyu that kept under control the pass separating the Central Highlands proper and the Southern Hills. During the Extensive Period, Takalik also greatly expanded, gaining Ujuxte and Tazumal as direct vassals and reduced them into rump city-states. It would also start an important process of southern expansion, encouraging colons to settle at the border regions between the Hills and the jungle to the south.

Defeated by Oxwitik and forced to stop encroaching on its territories, Takalik started to reform its military with the Ajaw now keeping a permanent professional force of "hunters" under its command. It also took example from Oxwitik and Nakabe and created knight orders to favour a "warrior mentality" among its nobility. New wars against Izapak for the control of Yajanite and its fertile lands proved the efficiency of the reforms, even if they were ultimately insufficient to gain the edge over Izapak's armies of mercenaries.

Takalik seems to have reached the limits of its growth and was slowly entering a period of economic stagnation in the years prior to the Nakabe Revolt, which alleviated the situation by giving the city's new opportunities to expand.

After the fall of Kaminyajunlyu, the Ajaw of Takalik declared himself the successor of the Paol'lunyu and K'uhul Ajaw of a new Mutul known in the chronicles as the Hunal Dynasty. From 370 to 349 BCE, the Hunal Dynasty was the main check to Nakabe's expansion, wrestling with it control over the Central Highlands and ultimately de-facto leading the coalition against Nakabe, with Izapak and Oxwitik as the other members. 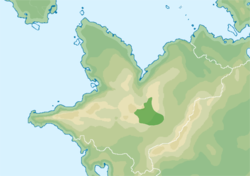 The maximum extend of the Hunal Dynasty during the Nakabe Revolt

Yuknoom Chen, Ajaw of Takalik, died in 351 BCE and was succeeded by his young son, Yoopat Hix. The same year, he was overthrown by his uncle and warlord, Tajoom Ti Chan. The situation stopped diplomatic relations between Takalik and Izapak, the latter demanding that Yoopat Hix be reinstalled. Tajoom Ti Chan ended up sacrificing his nephew and start a war against Izapak. As Oxwitik was being overrun by the Lencas, by 350 BCE the coalition against Nakabe stopped existing.

The end of the Hunal Dynasty came 7 years later when Nakabe led a Star war against Takalik and overrun the city's defenses, sacrificed its K'uhul Ajaw and its court, and dispersed its inhabitants. Nakabe's control over the region was short-lived however, as quickly Takalik's old vassals revolted against them and after 4 years of warfare, backed by Izapak, The Nakabeians had been chased from the Southern Hills. Takalik was resettled, but now was a vassal of the Izapak-based Syhij Dynasty.

Under the Chaan, the old Hunal Mutal was divided between multiple Yajawils or "Duchies". The Yajawil of Takalik controled only roughtly 1/4rth of the Huntal's territories. Despite its destruction at the hand of Nakabe, it nonetheless managed to bounce back since its location still allowed it to control the flux of goods between the north and the south of the Chaan Mutul. There is nonetheless a 120 years hiatus between the Nakabe Revolt and the construction of new monuments in the city. The Pink Pyramid was greatly embelished and entered its "Second Phase".

Takalik is one of the most competitive forces for domestic trade in the Mutul, rivaling even with cities such as K'alak Muul or Danguixh in its volume of retail. It's Department Stores are some of the most reputed in the countries and attract clients from all over the central regions of the Divine Kingdom.

Takalik is a major transport hub, being at the connexion of many highways and railways of the Mutul, making it an attractive location for enterprises wishing to export their products to other parts of the country. One of the most famous industry of Takalik is Tire manufacturing, with Kik'joy Sip known for its paternalist approach toemployment. Kik'joy Sip was founded, and has been the property since, of the Sip Family, one of the aristocratic houses of the city.

Being an important administrative center, many jobs are linked to the public services, both on a local or provincial level.

Retrieved from "https://iiwiki.us/mediawiki/index.php?title=Takalik&oldid=121895"
Categories:
Hidden category:
This page was last edited on 24 October 2019, at 10:12.
Privacy policy
About IIWiki
Disclaimers