The Ostrozavan Civil Service (OCS) (Ostro-Ludzic: Civilná Slujba Ostrozavská; (CSO)) is a partially uniformed civil service organization in the Prime Republic of Ostrozava operating under the Prime Defense Council. The Civil Service oversees the Civil Guard, which serves as Ostrozava's national guard and Prime law enforcement, as well as a plethora of agencies intended to coordinate the nation on the Prime level, such as the Cosmos Exploration Agency, Disaster Response Agency, Engineering Corps, and more. Outlined during the Third Worker's Convention, the OCS has full responsibility over Ostrozava's Prime-level police, national research initiatives, space exploration, disaster and disease relief, public transportation, and the construction of public works projects, chiefly roads, new housing projects, and national parks. The Ministry of Infrastructure typically delegates construction crews to the Civil Service's Engineering Corps.

Though officially a volunteer organization, many Ostrozavan businesses, unions, and Subprimes have Civil Service requirements for public office or higher-level job promotions; as such, it is estimated that approximately 40% of the Ostrozavan population has spent at least a year in the Civil Service working at least part time. As the largest service organization operating under the Prime Defense Council, the Civil Service has over six million paid members, sharing much of Ostrozava's publicly-owned industry responsibility with the executive branch. 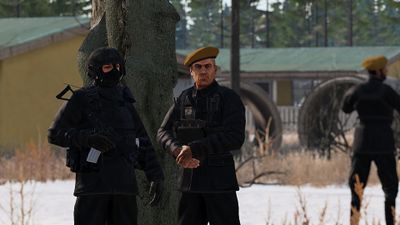 Armed Civil Guardsmen during the 2005 Polnitsan War near the Gariman border.

The Ostrozavan Civil Guard (Ostro-Ludzic: Civilná Gardá Ostrozavská; (CGO)) is the Prime Republic's largest national defense organization, at an average estimate of 250,000 members across 2019. The Civil Guard serves as a national guard and military police, dealing with inter-Subprime crimes, including highway policing, border controls (via the sub-divided Ostrozavan Border Guard), financial crimes and inter-Subprime criminal investigations, such as the recent murder of PRCO director Valdemar Rezek, and more.

Ostensibly, the Civil Guard also polices areas that do not have a traditional subprime or municipal police force, particularly wilderness areas and the Ostrozavan islands on Lake Kupalnitsa, chief among them Deryzlde. Subdivisions of the Civil Guard include the Ostrozavan Primarial Guard, Ostrozavan Border Guard, and Ostrozavan Park and Forest Service. Civil Guard members also guard important national monuments and heritage sites, such as cathedrals, monuments to revolution, and other Prime-level designated locations. Civil Guard members often serve as security for Prime government buildings throughout Ostrozava, though this task can be shared with either municipal police or the Ostrozavan Defense Force, depending on the specific location. The Ostrozavan Civil Guard is headed by the Prime Citizen through Civil Defense Commands North and South, each led by one general. 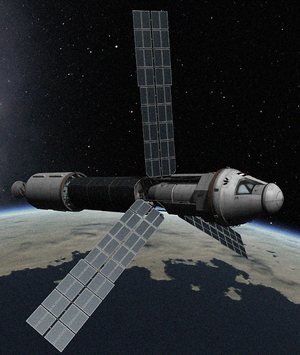 The Beranek-3. pictured here in 2004, is a typically-manned spacecraft used by APKO to deploy and repair various satellites and dock with space stations.

Formed out of the Prime Cosmos Exploratory Committee, a subdivision of the Executive Branch, in 1958 after the Third Worker's Convention, APKO is considered one of the world leaders in space exploration, particularly in the area of space telescope technology and the discovery of exoplanets, as well as early forays into radioisotope generators and reusable rockets. After a decade of stagnant financeering, funding to APKO has tripled every fiscal year since Socialist control of the People's Congress up to a total budget of what is estimated to be over Ͱ4 trillion, owing to the party manifesto asserting that full communism requires a multi-planetary society. Though it is not an official member, APKO regularly works with and contributes to the missions of the JSA, and has done so since Ostrozava's declaration of neutrality in 1989.

APKO's most famous missions include the Svetovid Space Telescope, 1992 unmanned mission to Kerantas, and the Beranek-5 series of partially reusable rockets.

The Ostrozavan Humanitarian Aid Agency (Ostro-Ludzic: Agentúra pro Humanitárnu Pomoc Ostrozavska (AHPO)), , is Ostrozava's agency for humanitarian aid on the international level, tied directly into Ostrozava's humanitarian presence as a member-state of the Forum of Nations. AHPO is tasked with providing basic and advanced needs to various crisis areas abroad as part of international relief missions; past missions have taken place at earthquake sites in Vardana and Tsurushima. Often considered a neglected organization, AHPO is funding-wise the smallest detachment of the Civil Service, often launching only a few missions each year, typically aimed at building villages or wells in developing nations.

In 1968, the AHPO weapons scandal tainted the reputation of the organization internationally, after it was found that the PRCO was funneling money through allegedly humanitarian channels in order to arm opposition forces during the Fourth West Scipian War between Invictist Sydalon and Yisrael. This abuse of AHPO is considered an important touchstone on the way to the Bartoș-Nabornek Act of 1969, which ostensibly ended the intelligence community's Contractual overreach capabilities.

The Prime Disaster Response Agency (Ostro-Ludzic: Primarní Agentúra pro Reakciu Katastrofy; (PARK)) deals with domestic response to natural and artificial disasters, overseeing evacuations, rationing, and refugee camps in times of great population displacement or war. Formed in 1960 in response to what was perceived as a failed response to Stromheimer bombardment of what would become the north-western Grey Belt, during the Hauland War, PARK oversees national disaster response efforts, and is tasked with the maintenence of fallout and disaster shelters and camps nationwide.

The Subprimar of the Subprime in which the disaster occurs must declare a state of emergency and formally request from the Primar that PARK and thus the Prime government respond to the disaster. The only exception to the Subprime formal request requirement occurs when an emergency or disaster takes place on Prime government property or to a Prime asset. In addition to this, PARK provides funds for training of emergency response personnel, including emergency medical technicians, firefighters, and more, throughout the Prime Republic as part of the agency's preparedness effort. In the event of a national state of emergency, PARK is ordained to take full control of all Subprime disaster efforts, and coordinate evacuation and relocation efforts on a Prime level.

The Prime Epidemiology Office (Ostro-Ludzic: Primarní Epidimeologickí Úrad) is the Prime Republic's primary organ of epidemic and pandemic response. Tasked with the development, procurement, and deployment of treatments in the event of a localized or global disease vector event, the Office was formed pre-emptively in 1979 after data from the decades-earlier typhoid epidemic revealed that Ostrozava was only an average of 59% prepared for such an event.

The Epidemiology Office monitors global disease outbreaks, and is tasked with educating the nation in disease prevention and treatment methods in addition to its primary task of dealing with an active disease.

The Prime Firearms Registration Office (Ostro-Ludzic: Primarní Registrácie Pušiek Úrad), is the Prime Republic's primary organ of the registration and ownership of firearms, whether for private or militia use. Furthermore, the Registration Office assigns serial numbers to every firearm in Ostrozava, including those used by other branches of the Service, Defense Force, or municipal police.

In practice, the Office also provides registered firearms to these branches, as well as the Crimson Volunteer Detachments, militias which all operate on a subprime level. The Prime Firearms Registration Office is also tasked with the discovery and recovery of any illicit firearms, often working together with law enforcement for this task. In order to become registered for a private firearm through the office, an Ostrozavan citizen must be mentally healthy, have fulfilled civil service requirements, and not have a violent criminal past of any kind; firearms for non-militia members are limited to handguns, however, if part of a Crimson Volunteer detachment, one may recieve a burst-mode assault rifle. The Registration Office also regulates and counts bullets fired within Ostrozava, and deals with the deployment of ammunition to those who need it. 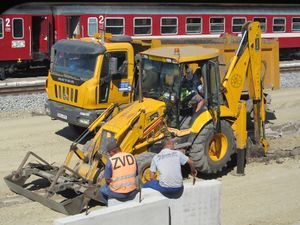 The Public Transportation Corps (Ostro-Ludzic: Zbor Verejnej Dopravy; (ZVD)) are a civil service organ tasked with the operation, maintenence, and procurement of inter-Subprime public transportation. This includes full responsibility of Ostrozava's public train lines, and the continued maintenence and electrificiation of such a system. While local public transportation, such as subway trains, buses, taxi services, and ferries, are typically left to Subprimes, the ZVD may share responsibility if the city is located on a border with international waters, such as Levigorsk, or if the Subprime train-line connects to a larger, inter-Subprime route, such as with the Karsko Main Line, which runs through four individual Subprime entities.

The ZVD employs drivers, contstruction crews, maintenence technicians, IT servicemen, security guards, and more. It is considered to be one of the most important civil service organizations, employing over 200,000 in various tasks in order to keep the system running smoothly. It works together with the Civil Guard's Border Guard to provide security to train depots at the border, and with the Civil Engineering Corps in the construction and maintenence of train stations nationwide. The Public Transportation Corps also run ferries and ships from the mainland to various islands on Lake Kupalnitsa, and to nations such as Suvarova and Drevstran across the lake, usually in tandem with the Border Guard. 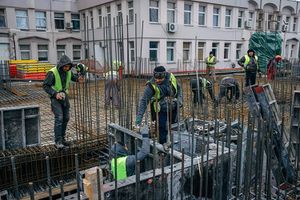 A ZSI work crew constructing a new shopping plaza on the site of a demolished set of flats, 2020.

The Civil Engineering Corps (Ostro-Ludzic: Zbor Stavebného Inžinierstva; (ZSI)) are a civil service organ in the Prime Republic tasked with the construction and maintenence of public works programs and infrastructure. Working in tandem with both the Ministry of Infrastructure and the ZVD, the ZSI was created in tandem with the New Society program in 1961, building the Grey Belt in underdeveloped areas, or otherwise in areas damaged or destroyed by the Hauland War. In addition to their construction duties, the Civil Engineering Corps also implement and regulate standards for safe construction, including guardrails and accessibility features, and can install such features on buildings throughout Ostrozava at the request of the government in the case of public land, or the owner of the dwelling in the case of private land.

Retrieved from "https://iiwiki.us/mediawiki/index.php?title=Ostrozavan_Civil_Service&oldid=354497"
Categories:
Hidden category:
This page was last edited on 1 June 2021, at 23:43.
Privacy policy
About IIWiki
Disclaimers