The Federation of Rizealand, commonly known as Rizealand, is a sovereign stated located in Asteria Superior on the planet Kylaris. It is bordered by Cassier in the north, Chistovodia to the east, Marchenia to the south, and the Vehemens Ocean to the west. It consists of 9 states, three sovereign indigenous nations, and two territories including a capital territory. With an area of 1.8 million square kilometers, it is the fifth largest country by total area in Asteria. At more than 64 million people, it is the eighteenth most populous country in Kylaris. The national capital is Camden and the most populous city is Liberty City.

Indigenous peoples first migrated to Rizealand more than 12 millennia ago and Euclean colonists began arriving in the 1500s. Rizealand emerged from former Gaullican colonies that had gained independence after the Asterian War of Secession (1764-1771). From the late 1700s to middle 1800s, Rizealand expanded eastward and south through establishing new territories by annexation and conquest of indigenous peoples. By 1890, Rizealand occupied all the land in the east up to Lake Weanoke and forced the remaining indigenous populations onto reservations. After ending a period of isolation by participating in the Great War and Solarian War, Rizealand emerged as a global power. Protests and unrest in the 1960s and 1970s led to the 1975 Civil Rights Reforms, which resulted in drastic liberalization and civil rights for women, people of color, minorities, and indigenous peoples.

Rizealand is a federation organized as a democratic representative republic with three branches of government. These three branches include a bicameral legislature, a president as the head of the executive branch, and an independent judiciary, although some consider the administrative state to operate as a fourth branch of government. It is a member of the World Assembly, Community of Nations, Association for Economic Development and Cooperation, International Council for Democracy, International Trade Organization, North Vehemens Organization, Organization of Asterian Nations, and the Atomic Energy Commission, as well as an observer in the Arucian Cooperation Organization.

Historians dispute the exact origin of the name "Rizealand" but agree it was likely derived from local indigenous languages. The majority view is that Rizealand was derived from the Onnohish word "Risi'Wa," meaning "bountiful land" or "bountiful country." The Onnohou people used the name often to describe present-day Rizealand. Another view is that Rizealand is derived from the Nehinawish word "Rizal," which was used by the Nehinaw people to describe gold. During contact between Estmerish colonists and the indigenous tribes of Rizealand, either "Risi'Wa" or "Rizal" were likely transcripted into "Rizea." This is one of the main reasons why a majority of historians reject "Rizal" as being the inspiration for Rizealand, given it was used separately by colonists to refer to money and after the Federation of Rizealand was established, Rizal was used to describe the Federation's new currency.

The first documented use of the word Rizealand was in the diary of John Stokes in 1651, where it was spelled "Rizea Land." Since then, Rizea Land or Rizealand was informally used by Estmerish colonists to describe the colonies of New Estmere and Lothicania. During the Asterian War of Secession, Rizealand became more popular as a descriptor for the rebelling former Gaullican colonies of New Estmere, Lothicania, and Fáel. Following the failed attempt to form a union with Marchenia after the Treaty of Vicalvi, the Articles of Federation established "Rizealand" as as the Federation's official name. 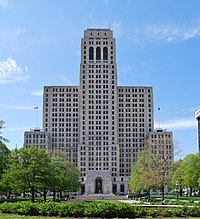 The Central Executive Complex, workplace of the President

The Fed Council Hall, meeting place of the Federation Council

The People's Hall, meeting place of the House of Representatives

The Palace of Justice, meeting place of the High Court and workplace of the Attorney General

A majority vote of both the Federation Council and House of Representatives is required to pass legislation and take most forms of legislative action. However, amendments to the Articles of Federation, overrides of presidential vetoes, and enactment of super laws require a three-fourths majority in each house. The House of Representatives is also responsible for initiating all taxation and appropriation legislation, approving the President's executive nominations, and impeaching government officials. The Federation Council is also responsible for ratifying all treaties, approving the President's nominations for diplomatic and ambassador posts, and removing government officials from office.

Independent administrative agencies are executive agencies not under the President's direct control. They are not established individually in the Articles of Federation but the Articles authorize their formation by the Central Assembly through super laws and they operate with specific functions such as law enforcement, rulemaking, or adjudication. The Attorney General however is a position established by the Articles and although he is considered a member of the judicial branch, his powers are primarily executive. The Attorney General is responsible for criminal prosecutions, fighting corruption, protecting civil rights, issuing opinions, and enforcing the orders or mandates of the federal courts. The Attorney General also has the authority to issue a constitutional challenge to legislation passed by the Central Assembly which suspends it from taking effect until the High Court has reviewed it. The Attorney General is appointed by the High Court for a single 10 year term and cannot serve more than one term.

Judicial power is exercised by the judicial branch, which is headed by the High Court of the Federation. The High Court is the only federal court established by the Articles of Federation and is the highest court of last resort. Below the High Court is the federation courts of justice, which are divided into five circuit courts. Within each circuit, there is a trial division and appeals division. The trial divisions of federal circuit courts are staffed by federal magistrate judges while the appeals divisions are staffed by federal appellate judges who hear appeals from the decisions of trial divisions. The High Court consists of seven justices and handles appeals from the federation courts of justice as well as cases where it has original jurisdiction. All federal justices, judges, and magistrates are appointed for life by the President from a slate nominated by the Federal Judicial Selection Committee. Federal courts have the power of judicial review. At the federal level, they operate under a common law legal system with Estmerish influences, although some states with Gaullican influence follow civil law instead.

The Articles of Federation establish a list of individual rights for Rizealanders including the freedom of speech, right to petition the government, freedom of conscience, right to self-defense, and right to privacy, among others. Citizens in Rizealand also have the right to recall federal government officials, refer legislation to a referendum vote, enact legislation via an initiative vote, and approve amendments to the Articles of Federation.