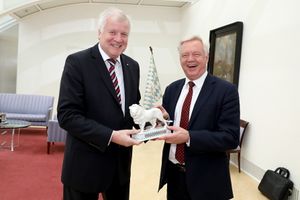 The Alte Bruderschaft (Estmerish: Old Brotherhood) is a term often used to describe the special relationship between Estmere and Werania, in the form of the close culutral, diplomatic, economic, political and military relations that the two nations share. Both countries share a historic relationship, and the two have shared an alliance in one form or another since Weranian Unification; as such, the two have participated jointly in a number of conflicts, such as the War of the Triple Alliance, the Great War, the Solarian War, the Kirenian-Weranian War and the Tsabaran Civil War.

The term was first coined by Weranian foreign minister Adolf Ritter von Kral in 1883, following the peaceful resolution of the Lake Edward dispute. It was used more broadly in the run up to the Great War The term has subsequently been used by leaders and commentators from both countries.

Historically, the bruderschaft has greatly influenced Euclea. Starting with Estmerish support for the unification of Werania, the relationship and alliance between the two countries would later serve as the primary anchor around which the Grand Alliance was built. The relationship was instrumental in Werania's accession to the Euclean Community, and within the EC the two countries have repeatedly acted together in mutual interest.

The strength of the Alte Bruderschaft has fluctuated over time, and its political component is seen as dependent on the leadership of the two countries. There have been a number of particularly close relationships among the heads of government of the two countries, such as between Viktor Beer-Hofmann and Fabian Young, between Ludolf Ostermann and Robert Reynolds, between Heidi Reid and Rasa Šimonytė, and recently between Reginald Wilton-Smyth and Otto von Hößlin. Critics have disputed the extent of the Bruderschaft, particularly in terms of its political, diplomatic and military aspects.

Weranian foreign minister Adolf Ritter von Kral made the first recorded use of the term in 1883, in conversation with the Estmerish ambassador and the Weranian press. This was following the conclusion of the Lake Edward dispute, in which Werania and Estmere peacefully resolved a colonial border crisis. Von Kral hailed the Alte Bruderschaft that the two nations shared. He made note of the shared history and culture of the two countries, commenting on the mutual influences on each nation's cuisine, culture and political systems. After it's use by von Kral, the term became widely used in both Estmere and Werania, and has been used by leaders and commentators from both countries since.