Prior to entering politics von Hösslin worked as a corporate lawyer representing Retenbank and ÖE Holdings (the state-owned oil company in Werania) before being elected to parliament at the 1991 general election for the NKP. In 1999 he entered the cabinet of Rasa Šimonytė as the Minister of Industrial Strategy and Employment. He served in the role until 2005 when he became Health Minister and in 2008 Defence Minister. When the NKP lost government in 2011 von Hösslin ran for the NKP leadership representing the national conservative wing of the party but he was defeated by Günter Schaefer who represented the moderate, neoliberal wing.

In 2015 von Hösslin became NKP leader where he steered the party to the right, supporting more right-wing populist policies. This led to a rise in support for the NKP which led to the NKP to become the largest party in the 2019 election. He subsequently formed a government with the Democratic Alternative party

Von Hößlin is seen to be a national conservative in his party, supporting economic nationalism and social conservatism. He describes himself as a "Sotirian democrat".

Otto von Hößlin was born on the 24 June, 1952 in the city of Gothberg in Bonnlitz-Ostbrücken. Von Hößlin was the second child and first son of Ludwig von Hößlin, a jurist who came from a minor noble family. His mother, Karin Berta von Neumann, came from the much more prominent von Neumann family with his great-grandfather Andreas von Neumann having served as the president of the Volkstag during the 1890's for the Conservative Party. His family have been described as conservative and Catholic with a "provincial mindset".

Von Hösslin was educated at the Saint Thomas Preparatory School, an all-boys private school located in rural Cislania, for his primary education. His secondary education was also at an all-boys private school, the Sternberger Gymnasium graduating with his abitur in 1970. He attended the Imperial Academy of Weisstadt studying a bachelors degree in law from 1970 onwards after passing the entrance exam that year.

Von Hösslin graduated from university in 1974 and worked as an apprentice (Rechtsanwaltsanwärter) for the Jungmann Law Firm based in Gofberg from 1974-1977. After completing an apprenticeship and spending ten months working as a clerk in at a local court von Hösslin became eligible to take a law exam in 1978 which he passed, enabling him to be officially employed as a lawyer (Rechtsanwalt). 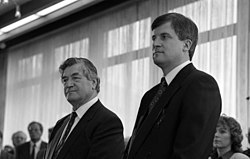 Following his graduation as a lawyer von Hösslin worked in a corporate capacity for the Weranian banking group Rentenbank from 1978 to 1982. He left Rentenbank in 1982 to work for ÖE Holdings, the state owned oil corporation in Werania.

Whilst working for ÖE Holdings von Hösslin successfully defended the group against several lawsuits put forward by various groups that sought to legally oppose various oil projects set up across rural Werania. In a television interview in 1985 von Hösslin accused environmentalist groups in Werania of trying to seek attention rather then positively contribute to society.

In 1986 he was assigned to ÖE Holdings foreign division and worked variously in Zorasan, Nuxica and Cassier. In 1991 he announced that he would be resigning from the company in order to run for a seat in the Volkstag for the National Consolidation Party.

Von Hösslin had joined the National Consolidation Party (NKP) in 1971 whilst still at university after seeing NKP minister and future chancellor Johannes Zollitsch speak at a political rally. He applied to become a candidate in the 1984 and 1987 elections in his native Gothberg but lost pre-selection each time. In 1991 as part of NKP leader Edmund Blaurock's reforms greater emphasis on candidate selection was given to younger people in the private sector; von Hösslin was as such approved to run in a safe rural seat in Bonnlitz-Ostbrücken. At the 1991 election von Hösslin was one of the 58 new NKP Volkstag members.

Von Hösslin quickly aligned himself with members of the NKP who supported both social conservatism and economic liberalism. A member of the Sotirian Nation Caucus, a loose grouping of socially conservative NKP members, von Hösslin alongside several of his colleagues attempted unsuccessfully to have abstinence-only sex education imposed on a federal level in 1992. In 1993 he voted against extensions to both abortion access and LGBT+ rights to adoption, motions which both failed to pass the Volkstag. In 1994 von Hösslin contributed to a policy document written by several NKP legislators which called for large scale tax cuts, curbs on trade union rights, an expansion of Werania's nuclear weapons arsenal and resistance to greater integration into the Euclean Community.

Von Hösslin was re-elected in the 1995 election which saw the NKP again defeated with party president Blaurock resigning. His successor, Rasa Šimonytė, made von Hösslin spokesmen on economic strategy and industrial relations. During the 1995-1999 term von Hösslin promoted a series of pro-business policies, being crucial in the NKP's proposals for economic governance if they regained power. These proposals included tax reductions across incomes and corporations, eliminating the capital gains tax, privatising transport infrastructure and withdrawing state subsidies to cooperatives that had been supported under the incumbent SRPO government. Von Hösslin also advocated restricting trade union rights including outlawing unions from engaging in political activity, allowing employers to sack and selectively redeploy workers if they chose, and sequestrating unions' assets if they broke industrial laws. He also stated that the NKP would consider implementing anti-union security laws. Within the NKP von Hösslin was viewed as a relative moderate compared to others who supported more free-market policies. 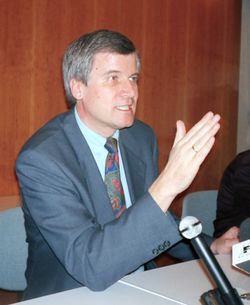 Von Hösslin at his first press conference as Industry Minister in 1999.

Retrieved from "https://iiwiki.us/mediawiki/index.php?title=Otto_von_Hößlin&oldid=267345"
Category:
Hidden categories:
This page was last edited on 24 October 2020, at 01:12.
Privacy policy
About IIWiki
Disclaimers