The mainland portion of Costa de Ouro surrounds Saint Anthony's Bay, a gulf of the Cassonnaise? Sea, and is separated from Morroseta by the Serra das Cobras, which rise to over 1,800 m (5,900 ft). Over a third of the autonomous community's land area is made up of islands which lie approximately 90 kilometres (56 mi) south of mainland Costa de Ouro. There are four main islands: from west to east, Antillia, Pascoa, Santa Maria and :).

The nation was discovered by the Portuguese explorer Vasco da Gama in 1500. Over the next several hundred years, the islands were further colonized by the Portuguese. The islands gained their independence in 1975 and a short period of democracy, within a constitutional monarchy and the House of Braganza-Silveira, and the first king João I, ensued. In 1981, however, Márcio Marcelo Gouveia overthrew the government and monarchy and established a right-wing authoritarian regime. Gouveia reigned until 2011 when he died of natural causes. The House of Braganza-Silveira monarch-in-exile, Fernando, returned to Costa de Ouro but died shortly thereafter, passing on the monarchy to his son, Pedro, who is the current king of Costa de Ouro.

The name Costa de Ouro comes from the Portuguese for Gold Coast, referring to the golden beaches of the islands when Vasco da Gama discovered the islands on his voyage to India in 1497. The name of the main island, Antillia, comes from a mythical island reputed to be in the mid-Atlantic; Costa de Ouro might have influenced that myth. The islands of São Nicolau, São Antonio, São Jose, Santa Maria, and São Mathieu are all named after saints; the island of Cibola is named after the mythical city of Cibola, as its beaches were so golden that it reminded the Portuguese of that legend; Pascoa is Easter in Portuguese, named after its day of discovery; and Natal is Christmas in Portuguese, again named after its day of discovery. 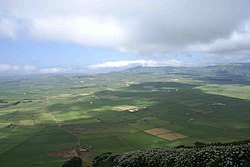 Pasture on Antillia, the territory's most westerly island

The most westerly of these islands is Antillia, which is predominantly plains grassland which rises towards low mountains in the centre and east of the island. The autonomous community's administrative seat is the city of Antillia, one of the oldest settlements in the country, on the island's northern shore. Antillia island encompasses an area of 740 km2 (290 sq mi). At 1,297 km2 (501 sq mi), the largest island in the archipelagic chain is Pascoa, which lies to the east of Antillia island. Pascoa is a mountainous and heavily forested island, and its timber was historically favoured by Morrosetan and Cassonnaise shipwrights. The island suffered severe depopulation in the wake of the 1783 Antillia earthquake, which crippled the principality's economy and led to a collapse of Pascoan industries. The third largest island in Costa de Ouro is Santa Maria, at 184 km2 (71 sq mi). The Montãnhas Negras are the defining feature of this island, occupying most of its land area. The town of Conceição is nestled between an arm of the Montãnhas Negras and Santa Maria Bay. Island number four is flat and 89 km2 (34 sq mi).

The Costeño landscape is dominated by four mountain ridges which run roughly perpendicular to the coast. The highest of these, the Serra das Cobras, climbs to 1,823 metres (5,981 ft) and separates Costa de Ouro from Morroseta. Between these ranges are rugged hills and upland, with deep, river-carved valleys in the interior and large areas of mixed forestry. The X and the Y Hills form the arms of Saint Anthony's Bay.

Costa de Ouro practices a policy of neutrality in the current cold war between the Astyrian Treaty Organization (ATO) and the East Astyrian Treaty Alliance (EATA), with good relations with both sides. Currently, Costa de Ouro has embassies in Nikolia, Aquitayne, Blackhelm Confederacy, and Agrincourt, with a high priority of the new government re-establishing diplomatic ties with the rest of Astyria after Gouveia's isolationist regime. Costa de Ouro is a constituent part of the Avissian Union, an union linking Costa de Ouro and Morroseta. Because of this union, bilateral relationships with Morroseta are very good, and the two have pledged to defend and support each other. Costa de Ouro has also signed a Treaty of Friendship with Nikolia after the marriage of King Pedro and Princess Helena of Nikolia. This treaty binds the two parties to mutual defense; other provisions include visa-free travel and exchange of science and technology. The only multilateral organization Costa de Ouro is a member of is the D5 Developing States' Council, in an attempt to distance itself from dangerous Astyrian politics.

Because of its small size, Costa de Ouro does not devote many resources to its military. The military consists of an Army and a Navy. The navy can be best described as a coast guard, with only a few corvettes and patrol boats of similar size that are more adept at dealing with smugglers and smaller threats than an engagement with other naval forces. The army, by the same token, can be described more as a national guard, although the Royal Guard and several other special forces are prioritized, as the government's policy towards the military is quality over quantity. Their is an air battalion within the Army, which operates three interceptor jets. Because of the conflict brewing in Astyria, Costa de Ouro has increased its defense budget from 0.7% of GDP to 1.1% of GDP. It intends to spread its arms buying across many companies to force competition on quality and price, and plans to buy one new interceptor and one corvette. However, both Nikolia and Kelonna operate bases on Costa de Ouro as a result of its strategic location in Western Astyria, and Nikolia, due to the Treaty of Friendship signed between the two nations, is partially responsible for Costa de Ouro's defense.

The old town of Antillia, the capital of Costa de Ouro

Costa de Ouro's transportation network is based on the fact that Costa de Ouro is an archipelago of several small islands. As such, most of the transportation within Costa de Ouro takes place by boat or small plane. A frequent system of ferries connects the main islands. In the main cities and on the main islands, a system of railways connects several of the major cities. In the air, Sonhos International Airport, on the island of Antillia, is the main international airport serving Costa de Ouro. Other major airports include King Pedro International Airport in Nova Lisboa and Albergaria Airport in Albergaria, both on Santa Maria.

Popular sports in Costa de Ouro include handball, association football, volleyball, and tennis. Costa de Ouro has an active football league, currently in its third season. Fortaleza FC is the current champion, defeating Antillia FC in the final. In UICA competitions, Costa de Ouro as a whole is ranked 86th and the highest ranking club, Antillia FC, is ranked 603rd. Costa de Ouro has participated in two World Cup tournaments with a win-draw-loss record of 5-5-18, ranked 149th. In tennis, Costeño athletes have won a total of one tournament, the 2014 Cenian Open, won by Aline Luiza Romao. Romao has also reached semifinals on several other occasions and two finals. She is currently ranked third in the world. Costa de Ouro sent its first Olympic delegation to the Games of the IX Olympiad in a unified delegation with Morroseta as the Avissian Union. As of Day 17, the Avissian Union has won 40 medals, 13 of them gold, and sits third on the medal table.

Retrieved from "https://iiwiki.us/mediawiki/index.php?title=Costa_de_Ouro&oldid=234604"
Categories:
Hidden categories:
This page was last edited on 5 August 2020, at 03:38.
Privacy policy
About IIWiki
Disclaimers