The League of Five Cities, or Cutinsua, was formed in 1324 in response to the rise of the Kingdom of Oruras. Cutinsuan armies subsequently conquered Oruras in 1336, and came to control much of northern Aucuria through a mixture of diplomacy, assimilation, intimidation, and conquest by the start of the 1500s. By the time that Euclea discovered the Asterias, Cutinsua was the largest, and one of the most advanced and most powerful, states in Asteria Inferior.

Cutinsua was conquered by the Ruttish in 1530. The Ruttish subsequently established a colony in the region; this colony was officially dubbed Aucuria in 1561. Aucuria was declared a co-equal part of a pluricontinental monarchy, the United Kingdom of Ruttland and Aucuria, in 1693; however, the Ten Years' War saw Aucuria transferred to Rudolphine control in 1721. Unpopular Rudolphine policies led to the outbreak of the Aucurian Revolution in 1786. Werania recognized Aucurian independence in 1793.

Following independence, Aucuria endured several swings between republic and dictatorship, defeat in the War of the Arucian, the Aucurian Civil War, and the occupation of the country by the Entente during the Great War. The military regime established by the 1949 Aucurian coup d'etat was overthrown in 1980 with the Velvet Revolution; Aucuria has had a democratic government since.

Paleo-Asterians in Aucuria domesticated several species of plant and animal.

Human remains and stone tools in the Čiklajus valley dated to 12,500 BCE, located in the state of Bendrieji Laukai, provide some of the earliest known evidence of human habitation in Asteria Inferior. Archaeological finds at sites such as Amotapas, Kotošas, Kupeniskvė, Mojekvas, and Senakelios attest to the presence of a series of lithic and preceramic Paleo-Asterian cultures in the area between the 12,000s BCE and the 3,000s BCE.

Potatoes and cassava, which would remain core staple crops in the region for millennia, were domesticated in Aucuria some time between 8,000 BCE and 5,000 BCE. Llamas, alpacas, and guinea pigs were domesticated in Aucuria in the 6,000s BCE; the domestication of quinoa, ullucu, mashua, and oca took place in Aucuria in the 2,000s BCE. The cultivation of corn, cotton, and calabashes spread to the region from Asteria Superior between 5,000 and 4,000 BCE. These indigenous populations spun and knit wool & cotton, and practiced basketry, but were aceramic and thus did not make pottery.

The arrival of cotton cultivation appears to be associated with a general shift towards sedentism in Aucuria's coastal regions and the valleys of the Vaskaranas Mountains, with the establishment of small villages based around varying combinations of farming, fishing, and herding. Marquez et al speculate that the weaving of cotton allowed for the creating of fishing nets and textile bags, which enabled agriculture and both riverine & ocean fishing; other archaeologists have found remnants of what might be early irrigation canals from this period, which could further suggest the growth of communal organization.

The first urban site associated with the Pativilkas civilization, located near the village of Čukekiravas, emerged in the 3,500s BCE; the largest site and the site for which the culture was named, at Pativilkas, emerged in the 2,600s BCE. The main site at Pativilkas spans nearly 60 hectares and is home to seven pyramidal platform mounds, several smaller mounds or terraces, and two large sunken plazas. It was also divided into an "upper half" and a "lower half", with most monumental structures concentrated in the "upper half" & residences in the "lower half" being smaller and simpler, and middens suggesting that diets were simpler in the "lower half" than the "upper half". Pativilkas sites are also often marked by the presence of menhir, irrigation systems, and terraced farms. These all suggest complex social organization and stratification, as some form of societal organization would be necessary for construction projects and class distinctions on such a scale. Sites associated with the civilization have also yielded knotted strings which some archaeologists have argued could be early examples of khipu, potentially indicating the existence of a system of writing or proto-writing; subterranean ventilation ducts; and cornetts and flutes made of deer, llama, & bird bones.

The remnants of a Pativilkas step pyramid and menhir.

Studies of middens at Pativilkas sites have suggested that the diet of Pativilkans was dominated by domesticated plants such as potatoes, quinoa, maize, squashes, and beans, supplemented by mashua, oca, ullucu, lucuma, guava, avocado, achira, pacay, and sweet potatoes. Meat remains found at Pativilkas settlements are almost exclusively from land or riverine animals - unsurprising given the civilization's location in the Vaskaranas Mountains - but some middens contain remains of anchovies, suggesting that they were caught by coastal populations, preserved, and traded with the Pativilkas inland.

Pativilkas sites show some marked differences with those of !mesopotamia & !egypt in Rahelia and the Bashurat Valley civilization in Satria. Most notably, the Pativilkas civilization was still preceramic. While pottery-making began to spread to Aucuria from neighboring Satucin in the 2,000s BCE, it did not reach those areas of Aucuria outside of the Sythe basin until after the collapse of the Pativilkas civilization; crops were cooked by roasting and bags woven from reed, wool, or cotton remained the predominant way of carrying objects. Pativilkas artifacts and sites also exhibit a strange lack of visual art, which researchers have struggled to explain; Girėnas suggested that Pativilkas religion might have been iconoclastic, but no hard evidence for this exists.

While the nature and degree of centralized authority within Pativilkas cities is unknown, Stulginskienė postulated that authority was likely religious in nature, with a focus on religious ceremony; Cornelis de Vries speculated that this sacred authority was bolstered by wealth from trade with other preceramic populations in Aucuria's coastal and highland regions. There is a distinct lack of evidence of defensive architecture or signs of warfare at Pativilkas sites, indicating that the increase in social complexity was not driven by conflict and that authority was not derived from military leadership.

After its peak in the 2,200s BCE, the Pativilkas civilization entered a protracted decline, which accelerated after 1,800 BCE. The reasons for this decline are disputed; some have suggested that it might have been caused by climactic changes which led to population movement away from Pativilkas cities, while others have proposed that Pativilkas was simply overshadowed by other areas with more fertile soil and greater proximity to the coast. By 1,700 BCE, the site at Pativilkas itself had been abandoned; the Pativilkas civilization had faded away entirely by the 1,500s BCE.

A Kiljakoljas gold ornament depicting a condor or eagle.

The Kiljakoljas culture, which existed from 1,300 BCE to 300 BCE, dominated much of Aucuria's central coastal and highland regions, stretching from what is now New Ruttland in the west to modern-day Suduva in the east. The Kiljakoljas culture was the first major Aucurian culture to use ceramic pottery and to work copper, silver, and gold; they also developed more refined techniques for masonry, weaving, and irrigation.

[1,300-300 BCE; no deciphered written language limits things but social organization seems to be heavily based around priests and temples and religious rituals; large temples adjacent to plazas and sunken courts; tombs near temples show distinct hierarchy and burial with worldly items]

[500 BCE-1000; more than 450 geoglyphs found in 2017 due to deforestation in aucuria and satucin suggest there was some sort of culture with many planned & fortified ceremonial gathering sites, possibly connected by roads, in the sythe-juoda basin; very mysterious, little corresponding artifacts, not much known]

[during the period from 100 BCE to 800, aucuria has two major civilizations in the vaskaranas, the tirakvas on the coastal side and the piura on the inland side]

[100-800 - when the marai civilization peaks, marai cities in satucin establish colonies along the aucurian coast; these colonies engage in both trade and conflict with the tirakvas]

[as the marai pass their peak (and tirakvas and piura collapse), colonies sever their ties with the mainland and eventually collapse entirely; nonetheless, tribal marai populations remain well-established in coastal aucuria until the arrival of eucleans] 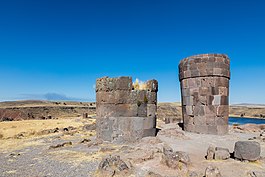 Oruran nobles were buried in funerary towers known as chullpa.

[1252-1300s - aymara polity which begins to rise very quickly under a string of competent rulers, some of whose names are preserved by oral tradition, distressing nearby populations]

[by the 1300s, with control over their southern flank secure, the oruran king Čukivankas turns to look at establishing control over the quechua city-states to his north]

[until 1417 - mankojupankis is the dynamic first ruler, tupakvalpas is unremarkable]

[ruttland depends on aucurian crops and the profits thereof, so to guarantee its continued connection to ruttland, it decides to create the UKRA]

[change in control not popular, some resistance to the shift by colonists but nothing super coordinated; abortive indigenous rebellion tries to take advantage of chaos only for its leaders to get killed]

[course of the war]

Arucian War through the Great War