The media of Mascylla are a broad mass consumed array of products and formats: in the type of online, print, and broadcast media, such as radio, television, newspapers, magazines, and websites. It also developed a strong and varied music industry.

Mascylla at large has a wide field of providers, both state-owned, financed by national tax revenues, and for-profit organizations and companies which rely and depend on advertising, subscription, and other generated revenues. Freedom of speech is protected by the constitution, while journalists enjoy an extensive governmental catalogue of protection and encouragement. This leads to a variety of different formats and outlets and a large consumption of media by Mascylla's populous. It is also internationally recognized and globally influential, with various media translated into other languages and their appearance known worldwide. 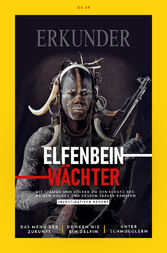 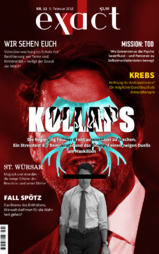 A large range of magazines are sold in Mascylla covering most interests and potential topics for current affairs, politics, economics, sciences, and contemporary culture. Certain magazines and journals have achieved worldwide circulation and have been translated into multiple languages, most notably Erkunder, Natur, Handelsblatt, Exact and Zeiten.

Magazines as a media has achieved significant importance and remains a key competitor to the traditional newspapers. While most major magazines are distributed through limited companies in favor of specializing in the release of one certain media instead of a diversifying, a growing number of monthly and weekly magazines are attributed to the Müller Media Group, which is in turn a subsidiary of Henschke+Bertelsmann, an internationally significant literature distributor and media conglomerate. The Sohlbrecht AG poses a counterpart to Müller, whose published magazines, including Exact and Zeiten, retain large creative autonomy in exchange for their affiliation to the publisher. The remainder of magazines are not completely independent however, with usually a portion of their stocks being owned by other corporations; for example ENS owns 30% of Aurora, while Sohlbrecht retains 45% of wissenkompakt despite it being published by Müller.

The Mascyllary print media market, though diversified, is recognized as one of the most concentrated media markets in the world. The most popular daily paper is the Faktor and its various subsidiaries and specialized papers, easily surpassing one million copies sold nationally every day. Other major daily published newspapers are the Langquaider Zeitung, Allgemeines Blatt and Globus, thoug regarded more highly for their content quality and appropiate journalism, which the Faktor was repeatedly criticized of lacking. Unusually, almost all Mascyllary print media publishers jointly operate the Maskillischer Presserat voluntarily as a body for their own self control. The council is a government-approved body for complaint and report, which through its senate can decide whether or not an article or media applies to the ethical standards of the national honorary press codex (Maskillischer Presseehrenkodex) and if it sees a file of report fit.

Logo of the Langquaider Zeitung

Logo of the Allgemeines Blatt 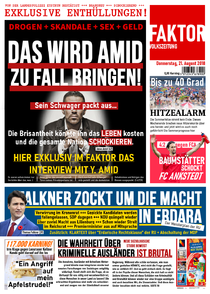 Tabloid newspapers are a style of newspapers, characterised by big headlines, bright colours, attention-grabbers, sensational stories and controversial topics. In Mascylla, they are referred to as Schreizeitungen (literally "screaming newspapers" for their evasive design) or Palettenpresse ("palette press" for its colourful imagery and wide mix of topics), rarely also Boulevardzeitungen (roughly translated as "popular papers"). 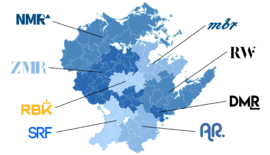 Radio in Mascylla is largely dominated by the public broadcasters of the state, which operate radio stations throughout the country. The domestic services of these broadcasters and all their revenue are funded by their television and broadcasting license. Rather than operating as independent entities, many radio studios are owned by large radio groups which broadcast a similar format to multiple regions. These are either the state-owned NMR, MBR, RKN or RBK, ZMR, RW, SRF, DMR and AR, and the privately owned Maskradio, Urbaner Rundfunk, various FM and Radio formats, and StudioNation.

Mascylla has eight regional public radio broadcasters in service, though all are also thoroughly active in broadcasting their own television channels as well. They cooperate in production value, general themes or topics, branding and advertisement and cultural event planning. These broadcasters are:

The channels with the largest shares of national television viewing in 2010 and 2018 in comparison were:

Retrieved from "https://iiwiki.us/mediawiki/index.php?title=Media_of_Mascylla&oldid=363167"
Categories:
Hidden category:
This page was last edited on 22 June 2021, at 16:17.
Privacy policy
About IIWiki
Disclaimers