The Second War in Vulkaria, also known as the 1999-2005 Vulkaria War, the Second Vulkaria War or simply the Second War, was a series of collective armed conflicts in the nation of Vulkaria that started in the late summer of 1999 and lasted until early 2005. The war involved Coalition of Crown Albatross forces led by Zamastan and consisting of Cadairian, Emmirian, Rio Palitan, Austrolisian, Quetanan, Besmenian, and Haduastani forces battling numerous terror and insurgent networks which had declared independence in their respective provinces. The groups included the revitalized Malvarian Liberation Front, backed by Elastan, along with mercenaries supplied by Ossinia and Martin Saint-Yves' regime and West Chanchajillan aid provided by Parish White's government. Following the events of the First War in Vulkaria and the sporadic protests and violence that persisted throughout the next decade, a government policy regarding capitalist and global economics installed in 1999 led to a revitalization of the M.L.F. and many other embattled groups wanting to take over power from the federal government in order to install a socialist regime. A civil war erupted in 2000 once again, and the nation was embroiled with global interests once again being threatened in the form of trade along the Vulkarian Pass canal route, as well as the threat of terror attacks being experienced by many of the nations involved in the coalition efforts. Rather than a conventional war in which one side aims to gradually gain territory, the war was marked through insurgent attacks mostly in urban centers, making for a difficult strategy for the Coalition.

After attempts at a diplomatic solution failed, the Coalition of Crown Albatross intervened, justifying the campaign in Vulkaria as a "humanitarian war". President Abram Mullen sent an international coalition into Vulkaria in 1999. In 2000, opinion shifted massively against the war and President Mullen, and President Camren Ellison inherited the war. In 2004, anti-war demonstrations were sweeping the globe, and newly elected President Cassious Castovia promised to find an end and pull forces out. By 2005, investigations had recovered the remains of tens of thousands of victims of all ethnicities, as well as that there had been "a systematic campaign of terror and severe maltreatments by rebel organizations". Often described as Iearth's deadliest conflicts since the World War, the conflict was marked by many war crimes, including genocide, crimes against humanity and rape.

The war ended with the surrender of rebel forces and the Neboroskiev Accords signed on February 6th, 2005 in Neboroskiev, Beleroskov. The accords solidified the surrender of the majority of insurgent forces and allowed capitulated rebel conscripts unobstructed access to flee to Elastan. The war was staggering in terms of the death toll, with over 2.3 million people killed, over half of them citizens. Vulkaria lost over 103,000 soldiers. The Coalition forces lost a total of 8,658 troops, including 3,246 from Zamastan, 2,502 from Emmiria, 972 from Cadair, 857 from Besmenia, 648 from Haduastan, 394 from Quetana, 30 from Rio Palito, and 9 from Austrolis. The captured and surrendered insurgent, rebel, and terrorist leadership were judged at the Vongane Trials in Vongane, Quetana from 2006-07, resulting in hundreds of prison sentences. The war was widely opposed by the general public, and anti-war protests went on for the entire course of the conflict.

The post-war Vulkaria retained all of its previous memberships in international organisations and began to work towards more international cooperation. In 1992, Gerod Kenili was elected President and instated a period of economic reform to rebuild Vulkaria's economy and infrastructure after the war. However, Kenili's government was widely corrupt, and the parliamentary systems of government voted to completely revamp the political sphere of Vulkaria. A relocation of a revitalized government was completed in 1996. Following the 1996 elections, Pokia Dirries became President with a dual-party legislature. Among the major projects of the two legislatures was to reform the labor market to become more flexible and reduce unemployment.

The modernization and integration of the Vulkarian economy was a long-term process scheduled to last until the year 2000. The economic integrations, however, had the unintended consequence of causing massive wealth disparities.

President Pokia Dirries' new sweeping policies regarding capitalist and global economics installed in 1999 led to a revitalization of the M.L.F. and many other embattled groups wanting to take over power from the federal government in order to install a communist regime. The rebel alliance of groups like the M.L.F. and the Vulkarian National Army began an insurgency to gain control of Vulkaria.

There were dozens of factions in the war, with the main two being the Coalition and the Etlya Alliance.

In addition to the two main factions, the war also attracted a small number of jihadists from the terrorist group Al-Fijar.

A civil war was officially declared by Dirries' government on August 5th, 1999, after fighting erupted in the coastal town of Stavodan. Shelling by the MLF killed dozens of citizens, and the federal forces were forced out of the city. A string of car bombing attacks by the insurgents against both federal and civilian targets in major cities like Amstelveen and the capital of Vulkar throughout the next several weeks killed thousands of people, and peace talks completely collapsed between the government and the rebels. Tens of thousands became internally displaced as federal airpower conducted airstrikes against rebel safehavens, but in the urban fighting rebels were gaining advantages by blending in with civilian populations.

Within a few weeks, Vulkaria's central region was embroiled with global interests once again being threatened in the form of trade along the Elkjop Bay and the Strait of Vulkaria shipping routes, specifically in the Vulkarian Pass canal, as well as the threat of terror attacks being experienced by many of the nations involved in the coalition efforts. On August 29th, a boat laden with explosives and piloted by MLF insurgents hit and sank a Besmenian cargo vessel as it was about to enter the Pass, killing 12 crew members. On September 3rd, a Jyaueze tanker vessel was hijacked by insurgents and run aground, causing an oil spill. On September 6th, a massive rocket campaign at the eastern end of the Pass caused traffic to completely stall, and the government was forced to halt operations. Ships which were stuck in the que line to enter the Pass became targets of rocket attacks and attempted hijackings, and nearly 100 sailors were killed over the course of the next week as fighting raged across the Pass's many checkpoints.

Joint-rescue operations by Zamastanian and Vulkarian federal forces were able to evacuate thousands of foreign diplomatic staffers as fighting engulfed the capital at the end of September. Additionally, ships which had run out of fuel in the que for the Strait were able to either be refueled for a return to home ports or were towed to the safety of northern Vulkarian shipyards, where their crews were sent back to their home countries. After Congressional Hall approved a proposal to aid the Dirries government, President Abram Mullen sent troops into Vulkaria on December 3rd to act as non-combattant advisors for the Vulkarian government.

Zamastanian troops during the Battle of Crotoy on March 3rd, 2000

In February of 2000, the international coalition intervened after a sweeping CCA resolution. Coalition forces, led by Zamastan, consisted of Cadairian, Emmirian, Austrolisian, Rio Palitoan, Quetanan, Besmenian, and Haduastan forces. Coalition forces arrived in Vulkar and Amstelveen on February 17th, 2000, tasked with securing government facilities and diplomatic offices under Operation Nevergale. At the same time, the Vulkarian federal forces began their own sweeping campaign to retake the neighborhoods around those major cities which had fallen to insurgents. The most intensive fighting of the war in terms of territorial battles was in the February-June 2000 phase, as the well-organized rebels were now faced with a more structurally sound international coalition aiming to route them from safehaven villages around the capital region. Nevergale was an initial strategic success as a quick and decisive operation encountering major resistance, though not what the Zamastanian, Quetanan, and other forces expected. The rebels had prepared to fight both a conventional and irregular, asymmetric warfare at the same time, conceding territory when faced with superior conventional forces, largely armored, but launching smaller-scale attacks in the rear using fighters dressed in civilian and paramilitary clothes.

Coalition troops launched air and amphibious assaults into occupied coastal villages, and joined by federal forces attacking from land they were able to force the bulk of rebel armor into retreats from the capital region. In the battles for Crotoy, Freeborn, and Estamveen, Coalition forces suffered minimal casualties compared to initial estimates. Coalition troops began their assisted occupation, which was accompanied by a widespread outpouring of gratitude toward the invaders, but also massive civil disorder, including the looting of public and government buildings and drastically increased crime.

In the first week of July, President Dirries was reelected as the coalition observed the election. Meanwhile, the Vulkarian government was able to rebuild some democratic structures, and the country changed its name to the Federation of Vulkaria. Attempts were made, often with the support of foreign donor countries, to improve the country's economy, healthcare, education, transport, and agriculture. International forces also began to train the Vulkarian National Security Forces, with official training beginning in June of 2000.

Abram Mullen, facing growing unpopularity domestically, was replaced on the reelection ticket by Camren Ellison. On September 22nd, 2000, Ellison was elected president and promised to end the intervention. However, on September 30th, three TAH-60A Vultures were shot down in the town of Grayana, about 10 miles east of Amstelveen. The ensuing rescue mission and battle was the first major combat operation against the insurgency and Coalition forces, and resulted in 23 Zamastanian, 6 Quetanan, and 2 Haduastan soldiers being killed. A few days later, a clash in Meytes resulted in significantly higher casualties, and Coalition commanders began to plan for a more intensive campaign against insurgents who they believed were trying to retake villages near the capital region, rather than their actual strategy which was to settle into urban areas without fully occupying and conduct guerrila warfare.

On January 5th, the Vulkarian government began introducing repatriation programs for Vulkarians who began returning after years of refugee status in other nations. Nearly five million Vulkarians were repatriated by 2010.

By 2003, a M.L.F.-led shadow government began to form in parts of the country.

President Dirries attempted to hold peace negotiations with the M.L.F. leaders, but the rebel group refused to attend. Samuel Kannit was captured by Coalition forces on May 9th, 2004, leaving the M.L.F.'s control to Van'a Kamoni.

On September 22nd, 2004, Cassious Castovia won election, replacing Camren Ellison and promising to end the war by committing a surge of troops to pressure the MLF.

In early-2005, Van'a Kamoni finally decided to back the peace talks as their chance for victory dissipated. 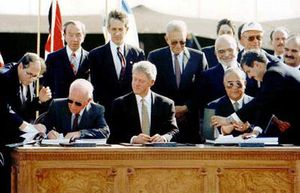 The war ended in 2005 with the surrender of rebel forces and a signed treaty by the Federal forces and Coalition observers to allow small territorial governance by M.L.F. and V.N.A. forces. The war was staggering in terms of the death toll, with over 2.3 million people killed, over half of them citizens. Vulkaria lost over 103,000 soldiers. The Coalition forces lost a total of 8,658 troops, including 3,246 from Zamastan, 2,502 from Emmiria, 972 from Cadair, 857 from Besmenia, 648 from Haduastan, 394 from Quetana, 30 from Rio Palito, and 9 from Austrolis. Until the Syraranto civil war, it was the deadliest conflict since the World War.

Samuel Kannit was convicted of 43 counts of war crimes, 7,034 counts of murder, and 120,000 counts of attempted murder at the Vongane Trials in 2006, and he was sentenced to death. Kannit was executed by lethal injection on April 8th, 2008, in Tregueux, Zamastan.

The anti-war protests were highlighted in the Zamastanian movie Trial of Elkford (2021), directed by Quentin Cooper.