Union Central Television (Pasdani: تلویزیون صمیم اتحا; Telviziyun Sameem-e Ettehād; Badawiyan: تِليفِزْيون أَوْسَط الاتحاد; TilifizyūnʼAwsat al-Ittiḥād), UCTV, is the predominant public television network in Zorasan. UCTV has a network of 11 channels broadcasting different programmes and is accessible to more than one 200 million viewers. Most of its programmes are a mixture of news, documentary, social education, comedy, entertainment, and drama, the majority of which consists of Zorasani soap operas, documentaries and entertainment. Prior to 2005, UCTV was the primary producer of religious programming, until a subordinate affiliate, E'lam Network was established. UCTV was established on January 11 1980 as the successor to the Union Broadcasting Administration, and it is a news and public opinion organization, and an ideological and cultural front in Zorasan. As a state television station it is responsible to the Government of Zorasan, through the Union Ministry for Irfanic Culture and National Harmony.

UCTV was officially formed on 11 January 1980, as the legal successor to the Union Broadcasting Administration, that served the Union of Khazestan and Pardaran. Upon its formation, it incorporated Irvadistan's sole broadcaster, Al-Taḍāmuniyy into its structure. UCTV until 1992, was the only permitted television and radio broadcaster, alongside the Resistance Broadcasting Corporation. The broadcaster swiftly established itself across the new Union of Zorasani Irfanic Republics, while only providing three television channels and three radio stations.

Between 1980 and 1989, UCTV's products were entirely devised by the State Administration for Broadcasting and Religious Propagation, insofar that virtually all broadcasting with the exception of sports coverage was propaganda and nationalistic. According to UCTV's charter at the time, its duty was "promote and propagate the unification of all Zorasani people into the new Union." As time progressed, the military's control over the broadcaster receded as it developed the Resistance Broadcasting Corporation to serve its interests, this enabled a boom in soap operas, dramas and television films. Even though the variety of shows increased during this time, all maintained a patriotic theme or message.

By the 1990s, UCTV's strict guidelines were liberalised and its variety of products expanded dramatically. This was followed by a liberalisation of media in general, coinciding with a wider social and cultural liberalisation through the Saffron Period. In 1992, private and semi-private broadcasters were formed, reducing UCTV's market share - the broadcaster responded by launching UCTV-4, 5 and 6 in 1993. These channels included numerous game-shows, comedic and satire shows and high-quality dramas. These efforts were relatively successful, with UCTV restoring its strong market share by 1996.

In 1999, UCTV launched minority-language clone channels of those it broadcasted, while also introducing UCTV-Asayesh (Peace), a religious programming channel with a scheduel representing every minority religion in Zorasan. UCTV-Asayesh would remain on air until late 2005, when a majority of religious programming was centralised through its affiliate, the E'lam Network. The early 2000s saw a significant reduction in censorship and the emergence of more liberal programming. A series of dramas were released between 2001 and 2004 that provoked wide-ranging backlashes from the Irfanic religious establishment and from conservative sections of society, this coincided with the decline of the Saffron Period. This backlash culminated in 2004, with the forced removal of Kambiz Mohammadi as Director-General and his replacement by Parsa Derakhshani by vote of parliament. Derakhshani was a noted conservative media critic and rolled back much of the liberalising guidelines.

Following the end of the Saffron Period with the 2005 general election, UCTV underwent major reconstructuring by the hardline principalist government. This included the shutting down of numerous television and radio shows and an overhaul of news programming.

In late 2005, the E'lam Network was set up, followed by UCTV-Artesh, a channel dedicated to covering the armed forces in a more public-friendly manner, with the introduction of children shows, talk shows and documentaries. 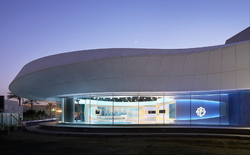 In 2012, UCTV moved most of its studios to the Basheer Complex in At-Turbah, the state capital of Riyadha.

UCTV-News underwent a significant overhaul with a resumed nationalistic and a widely considered impartial slant being applied to its journalism. However, in 2008, UCTV-News was expanded to include a Gaullican, Estmerish, Xiaodongese and Floren language channels being launched. In 2009 this was followed by the establishment of affiliates in Ajahadya, Tsabara and Mabifia.

In 2012, the entire broadcaster was moved to a new large complex in At-Turbah, the state capital of Riyadha, as a means of promoting de-centralisation from Zahedan. The new Basheer Complex cost an estimated $4.4 billion and included large film studios, recording studios and set design facilities.

By 2019, the degree of government control had reached its 1980-era levels, with numerous media watchdogs and commentators describing UCTV as "inherently a propaganda machine, wrapped up in modern creative scriptwriting." In late 2019, over 100 employees were sacked by the overseeing Union Ministry of Irfanic Culture and National Harmony in order to "secure UCTV as a successful vehicle for social and national unity."

UCTV has been accused on several occassions of broadcasting false stories or fabrications in response to droughts. During the Drought of 2006, UCTV was accused of misleading its viewers after its news channel broadcasted recycled footage of water fountain celebrations from the north-western city of Mazdavand, when denying shortages were effecting the southern city of Jozdar. This was followed in the 2008 drought with UCTV accused of using footage of a man confessing to hoarding water so he could charge more for bottled water in his shop. Investigative journalists discovered this man was a local stage actor from Soltanabad, leading many to accuse UCTV of faking the footage.

During the 2019 Zorasani Protests and drought, UCTV was again accused of misleading viewers by broadcasting stories and eye-witness testimonies of key water infrastructure being sabotaged or damaged by Duljunese activists. UCTV was also criticised by pro-democracy groups for broadcasting confessions by Duljunese citizens, many argued were forced. The broadcaster also avoided covering the mass anti-government protests in the south by focusing on government efforts to restore running water. Zorasan Media Watch, a civil liberties NGO, stated that, "when police shot at protesters, UCTV was running rolling shots of army engineers fixing a pipeline."