Satavia, officially the Republic of Satavia (Hennish: Republiek Satavia), is an Island Nation in Western Asteria Inferior, and shares a Maritime Border with Nuvania. Satavia consists of the Satavian Isles and the Patrick Islands, an autonomus dependency of Satavia. The capital, largest city and biggest financial center is Port Hope, which had previously been known as Hope Town. Satavia is made up of 6 historical provinces, namely Hope Province, Northern Hope, Andersland, Dukeminster, Camburton Province and Ballyleigh and 22 counties.

Satavia was one of the last countries in the Asterias to gain independence, doing so in 1900. In a 2012 Referendum, 67.44% voted to restore the pre-republican flag of Satavia, and replace the Republican Flag.

The First Hennish Republic and their South Asterian Company first established trade posts along the Satavian Coast in 1544, four years after both the Duchy of Flamia and the First Hennish Republic had established trade posts along the Nuvanian Coast. By 1548 at the earliest[1], the Duchy of Flamia, with their New Asterian Company, began colonising Satavia. However, in 1552, the Duchy abandoned their trade posts after a short, undeclared conflict which ended their involvement in Satavia. All of these trade posts are now uninhabited, with the majority having been destroyed or dismantled.

The Flag of The Estmerish Hope until 1816. The Coat of Arms of Satavia are seen on the flag's fly side, along with the Royal Standard of Estmere in the flag's canton

In 1649, the Sotirian Commonwealth officially took over the South Asterian Comapany's remaining trade posts. This saw a period of inactivity in Satavia, untill the Grand Duchy of Flamia was established in 1719, which heralded a change of administration and an influx of cheap labour, paticularly from Bahia. The Grand Duchy's conquering of Commonwealth settlements in Satavia and Nuvania saw the creation of Flamian Asteria. 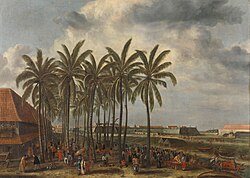 The Castle, by Hennish Artist Clop de Vil, depicts a scene in central Hoopstad with Hoopstad Castle visible in the Background. The Castle no longer exists, having been destroyed during the Estmerish-Hennish War of 1747

Following the Estmerish-Hennish War, the colony was transfered to Estmere, who created Estmerish Asteria. This was disolved in 1778, creating instead Nuvania (a colony) and the Hope Teritory. This short-lived teritory would be succeeded by the Estmerish Hope, also called the Hope Colony in 1782. The Estmerish period would see a booming population and industry, a reason often attributed to Satavia's politicians reluctance to seek independence from Estmere, unlike their Nuvanian counterparts. The period also saw extensive Estmerisation, which saw the majority of the populace starting to speak Estmerish, as opposed to Hennish.

Hoop Kolonie (1732) by Adriaen de Wiart depicts the Hennish Settlement at Hoopstad. In reality, the painting is highly inaccurate, and de Wiart never visited the Hope Colony. Instead, he painted it off descriptions of the colony.

In 1811, Nuvania was granted home rule, to be followed by Satavia five years later in 1816, under the Hope Colony Home Rule (Dominion) Act 1816. The Estmerish Hope became the Hope Dominion, and in 1816 it's first Prime Minister, Richard Somerset, was appointed. The next sixty years would see a period of rapid growth and self sustainability, with Satavia beginning to trade with Nuvania more than Estmere. This would be shattered following the War of the Arucian, which Satavia was not involved in, but following Nuvania's victory and then decleration of independence would lead to a decline in trade with Satavia and the eventual economic crash in the form of the Satavian Recession of 1893. Estmere's lack of interest in helping the Dominion lead to Satavian leaders asking for independence. 1893 also saw the first Satavian Governor actually from Satavia, unlike previous Governors who had all been from Estmere. Following a series of bilateral talks with the Estmerish Government, and the rejection by Satavian leaders to be 'equal partners' with Estmere and Satavia sharing a Monarch, a deal was reached in that Satavia's Governor, a cousin of the King of Estmere, Patrick, would be made King Patrick I. On the 1st of January, 1900, Satavia became the last major colony in the Asterias to declare independence.

• Patrick I Proclaimed King of Satavia

The Satavian Crisis was a period of sectarian political violence in Satavia that lasted from 1973 until 1983, with the Cease Fire and Normalisation of Civil Relations Act, 1983 which ended the government's state of emergency and saw an effective end to all fighting in Satavia. The collapse of the Second Bleum Government in 1976 lead to the establishment of a caretaker government lead by Arthur Elliot. Following the 1976 Republican Election, a non-Republican Party government was established, the first since 1935, which saw the end of the Satavian Republican Period and the re-classification of Satavia from an "effective one-party state" to a "multi-party parliamentary democracy" with the Community of Nations and the International Council for Democracy.

Initial violence erupted in 1973, following the introduction of the 1973 Satavian Constitutional Amendments which clamped down on anti-republican sentiment and was introduced by far-right Republican Party leader and Prime Minister Dick Bleum. Violence was started by the Free Satavian Army, who advocated for a return to "real democracy", with their attempted assasination of Bleum. Soon after, Monarchist Paramilitiaries began a campaign of terror.

Several attacks in 1976, and the 1976 Satavian Riots lead to the complete collapse of the Republican Government, and the introduction of a caretaker government. 41 years of single-party rule ended, and following the 1976 General Election, lead to the first SDP government. 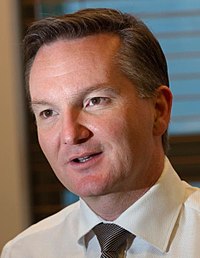 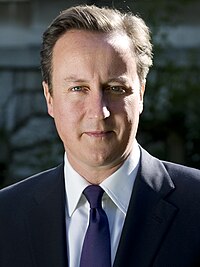 Satavia is a parliamentary republic, previously having no written constitution until the 1935 February Coup. Satavia's seperation of powers extends to the judiciary, executive and legislature. Satavia's head of state is, legally, the Governor-General, however, in practice the position holds no power whatsoever, and powers usually vested in a head of state are invested in Satavia's head of governemnt, the Prime Minister. Like the majority of Estmere's former colonies, Satavia loosely follows the Northabbey Model.

The Pariliament of Satavia, Satavia's bicameral legislature, is made up of the House of Representatives, the directly-elected lower house, and the County Court, made up, in part, by unelected peers (however, succesive Government's have kept a policy of not awarding new peerages) and, the majority, as County Senators, who are elected every 5 years (with the exception of counties in Ballyliegh, where it is 7 years). The County Court is Satavia's upper house, and has the power to review and refuse to pass legislation, where it then gets returned to the House of Representatives to be ammended.

Until 2008, there were seven provinces, but the two smallest (the Upper Highlands and the Lower Highlands) were amalgamated into the newly-formed Camburton Province. Provinces are merely symbolic, and described officially as "Historic Provinces". Each province has a Governor-General, directly subordinate to the Governor-General of Satavia. Often these posts are given to former Prime Ministers and politicians, with two former politicians, Johan de Vilock and Charles Hisloep-Freeke currently holding the position of governor of the Hope Province and Andersland respectively.

Satavia's second teir subdivision are counties (and, more recently, metropolitan areas), which were established over time during the colonisation of Satavia. Most counties have a Lieutenant Governor, directly subordinate to the Governor of their respective province (with the exception of the Patrick Islands, whose Lieutenant Governor reports to the Governor-General of Satavia), County Camburton has County Sheriff, and a couple have a County Council Executive. The Metropolitan Area of Adamstown has a Mayor, whilst Port Arthur, Port Edward and Port Hope all have a "Commander of the Garrison", with the Commander of the Garrison at Port Hope being ex officio held by the Governor of the Hope Province.

The third and lowest level subdivision is the District. Districts are smaller than counties, and are somewhat comparable to a municipality. Districts are usually run by a town council, or something to a similar effect. There are 289 districts in Satavia, many of which are called 'boroughs', most of which are in cities, however, some are located ruraly - albeit this is rarer.

Retrieved from "https://iiwiki.us/mediawiki/index.php?title=Satavia&oldid=278837"
Categories:
Hidden category:
This page was last edited on 23 November 2020, at 19:22.
Privacy policy
About IIWiki
Disclaimers