The Midrasian national football team was one of the first men's international footballing teams to be formed, laying the foundations for other nations to follow suit. The Midrasian team is known as one of the powerhouses of Aeian football, having a spectacular historical record and winning the Copa d'Aeia on five occasions: 1992, 1999, 2009, 2014, and 2019; more than any other international team.

The national team's kit has overwhelmingly used a red and white striped pattern taken from the Midrasian flag. However, on a number of occasions, notably between 1999 and 2000, and 2014 to 2017, the national team's home shirt was primarily red with white trimming. However, the introduction of the plain red design proved controversial with fans, leading the team to reinstate its ubiquitous striped design for the 2018 Copa d'Aeia.

The team's crest has changed dramatically over the years, undergoing numerous redesigns which have in many cases been radically different from each other. Beginning in 1928 the team's kits featured a rooster emblem based upon that visible within the national coat of arms. The team held onto this design for fourty years before a new diamond crest emblazoned with the national stripes was introduced. By 1978 the team returned to using a rooster as its emblem which remained in place under various designs until 2006 when it was replaced with a striped shield. In 2015 to celebrate the team winning their fourth Copa d'Aeia title, the rooster returned for one year before the current design was introduced for 2016. 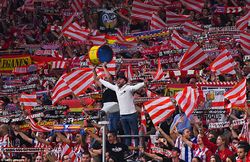 The supporters of the Midrasian national team are seen to be some of the most avid and dedicated football fans in all of Aeia. Midrasian ultras, nicknamed the tifosi are renowned for their use of banners, flags, and flairs during matches, particularly during the Copa d'Aeia. Nevertheless, the tifosi has in the past came to be associated with hooliganism, particularly when Midrasia is defeated. This was particularly prominent during the 1980s, with one particular event leading to a stadium crush causing the death of 12 fans, a major factor in the government's decision to mandate all-seater stadiums.

The new Stade Nationale before its opening in 2016

The home stadium of the Midrasian national team is the Stade Nationale, which is the largest stadium in the country with a capacity of 90,000. The stadium has been the home of the national team since 1958 and has undergone a number of changes since its initial construction. Initially boasting a capacity of 100,000 standing, the stadium was refurbished as an all-seater stadium in 1985 to comply with new government regulations on sports stadia. However, as a result, the stadium's capacity was reduced to only 43,000. Over time the stadium was expanded, eventually reaching a capacity of 78,000 in 2004.

With the announcement that Midrasia was to host the 2016 Copa d'Aeia the entire stadium was demolished and rebuilt with a capacity of 90,000, eclipsing the Stade de la Sute to become the largest stadium in the country in terms of capacity. The new ground features a specialised fan-zone outside of the stadium, a bar the same length as the goal-line and two high-definition TV screens.

Since the 1970s all of Midrasia's qualifying and friendly matches, along with the Copa d'Aeia have been televised by Midrasia's public broadcasting company MTRT and regularly feature on the channel TV1. Midrasia's international matches within the Copa d'Aeia are among the most watched events in the history of Midrasian television. Midrasia's matches are also widely broadcast internationally, with the Démarrer network regularly featuring the matches of the Midrasian national team.

Retrieved from "https://iiwiki.us/mediawiki/index.php?title=Midrasia_national_football_team&oldid=172602"
Categories:
Hidden categories:
This page was last edited on 28 February 2020, at 18:03.
Privacy policy
About IIWiki
Disclaimers