In this edition, three cities placed a bid for hosting rights. They were Duomji, StrayaRoos Barrier Islands, Hercules, Beepee and Keterig, Aenglide. This was both Aenglide's and StrayaRoos Barrier Islands' first bid, while this was Beepee's fifth bid. Beepee also had bidded and hosted the previous contest, which was the WorldVision Song Contest 97, in an attempt to be the first country to host the WorldVision Song Contest two or more times in a row.

The host city was Keterig (Kéterig in Aenglic), which is both the capital and largest city of Aenglide, with roughly around 693,000 people living in and around the Keterig City and District. Being the capital and largest city, A lot of Aenglide’s cultural aspects can be found in Keterig, and is the gateway for every tourist and international hub of the country. Formed by Aenglish Viking culture, the city gets its roots from Nordic-like traditions and history and has always been the largest city of Aenglide since the Kingdom of Aenglide's formation in 1870. 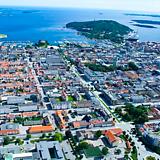 City of Keterig, overlooking the City Centre onto Brjdo Bay and Alexandra Hill.

Keterig's VADtk Arena (which can be spelled as both VadTK or VADtk) is a great venue to host large events like Worldvision in due to its sizeable capacity of approximately 70,000 seats for viewing. VADtk is the largest and most popular venue for events in Aenglide. VADtk has hosted a countless number of indoor sports like basketball and indoor tennis, and other local events too, such as an indoor marketplace that had nearly 600 people selling items in on one sunday morning, and even the local district governments meeting up. For Worldvision, VADtk was transformed by adding a stage set and adding seating and the LED lights already fixated into the back wall were used, and a stage floor LED screen was also installed for the contest, and remains a permanent part of the arena afterwards. 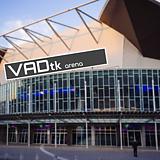 The theme of this WorldVision Song Contest was about the Nature of Music, as also told by the motto of the contest "The Nature of Music", as well as the prominent motif "hakjelíle" which is a simplified version of an Aenglish Dandelion which is shown throughout the branding and logos of WorldVision 98. The theme describes Aenglide's natural world, from geographical nature (mountains, forests etc.), to ecological nature (animals), to cultural beauty, to other natural sights that would be seen within Aenglide. The nature is represented on each country's postcard, along with the word of that said piece of nature in the Aenglic language, the official language of Aenglide. The hakjelíle is also featured on the postcards, in five shapes in the colours and (somewhat of) the stylisation of the respective country's flag.

Adab is left blank as the country had withdrawn from the contest before a graphic postcard was created.

The opening act was Erá Mojyk and the Aenglish National Orchestra, performing the original piece “Vján de gaúðin blöver nær méj”, which translates to "When the wind blowers near me" in Aenglic. The opening parade was titled “The Grand Opening - Aenglish Mix” and was used as a combination of songs for the opening parade, where all of the artists walk out onto the stage before their performances. The interval act between the last performance from Missus X and the beginning of the jury votes was Akjefuldin rock band The Mercantiles, who performed their song "Benevolent Frequencies", which was the Aenglish entry for Worldvision 98 in Norfolk Pinewoods, Beepee, who came second.