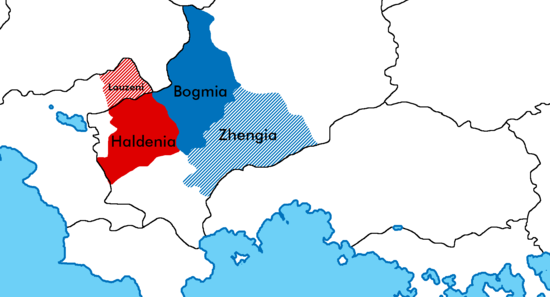 Location of traditional Bogmia and Haldenia with their respective extension areas

Bogmian Mountain Conflicts are a series of conflicts between powers in the Mustelarian basin (Empire of Three Kings, Bogmia, later Zhoushi Union) and transmountainous areas (Haldenia, by extension Council State).

The "Western Imperial Wars" is a common term for multiple wars fought by the Empire of Three Kings outside of the Mustelarian basin, especially in present-day western Zhousheng. A part of this set of wars is the Bogmian-Haldenian War and War for the sea.

Prelude to the War

With the end of the conflict between Bogmia, Zhengia and Belgoria, the Empire of Three Kings has been created in Mustelarian Basin, creating a centralist power of three kings reporting to an emperor.

On January 1776, Imperial messengers were sent across the mountain range to Haldenia, to contact haldenian queen Judita IV., asking her to consider becoming a vassal of the Empire of Three Kings and its Emperor in exchange for the imperial support of her future hypothetical attempts on southwards expansion, effectively proposing the "Empire of Four Kings". The messengers relied the message to the queen sometimes in April.

Queen Judita IV. of House Khani officially decided to refuse the proposal, fearing the influence from across-the-mountains overlords, which are just too much disconnected from the issues of Haldenia. With the refusal, the messengers returned to the Kingdom of Bogmia, an Imperial soil, in July. The Emperor, Lagislaw I., was angered by the refusal and decided to take Haldenia by force. His elite Imperial units along with Bogmian forces called for arms by the king Julius II. quickly organized next to mountain passes. In December, Imperial powers were given order to cross the range and take positions in Haldenian cities, officially beginning the war.

Haldenian armies were surprised by the attack, not being informed by the ultimatum. It is generally agreed, that Judita IV. probably expected the proposal to be a bluff without any reprocussions if refused. Some historians dispute the idea and rather claim, that Judita didn't warn the troops in time, because she expected the mountain passess to be impassable to any greater army formation. Be it either way, border legion was quickly overrun by Imperial units, which were followed by Bogmian armies. By February 1777, Imperial armies were established and reinforced by Bogmian forces, which were supplied from farms of the locals as well as minor shipments across the mountain ranges.

Judita IV., quickly realizing the mistake, went on a campaign and called four legions from the west to defend the capital, Orlobirg. First clashes between the Imperial and Haldenian troops mostly ended with crippling defeat to the Haldenian soldiers, but any attempt on advance of small Imperial units was easily defeated.

Gasnowice, a mountainous city being on the Haldenian side of the biggest mountain pass was the only chokepoint to the Imperial troops, being still firmly held by Haldenian armies. In November 1777, after months of back and forth and failures to create a more favorable position, Imperial troops were ordered to occupy Gasnowice.

Small Bogmian unit was chosen to advance to Gasnowice from the mountain pass with the main army being perpared to encircle the city from the back. Bogmian troops entered through the mountain pass, with Haldenian miltia quickly opening fire with muskets onto the advancing troops. The troops later deployed canons and shelled the city back. After few hours, the bogmian troops were ordered to retreat, opening the trap. Many haldenian militiamen decided to abandon their positions and rush towards the abandoned bogmian equipment to recover it and gain a stepping stone into the mountain pass.

At that moment, Imperial troops were ordered to cross into the city from the back, easily breaching the gates and entering the inner city without much resistance. Militiamen, which abandoned their position were quickly called back to fight for the city, but it was too late. In a matter of 30 minutes, Imperial troops controlled most of the city. However, something surprising happened: Gasnowice civilians started harrassing the soldiers and building the barricades. This clash continued for more than a week during the occupation.

With no relief army approaching, Haldenian mayor of the city decided to negotiate with Emperor Lagislaw I. and his military commanders. The treaty was very favorable to Gasnowice, promising the city to not pillage or plunder any settlement within 10 leauges of the city and giving absolute amnesty to any person fighting Imperial units during the battle. Emperor Lagislaw I., being shaken by the loyalty of the Gasnowice, decided to give the city a brand new motto: "Gasnovicum, Civitas Fidelissima" ("Gasnowice, the most loyal city" in Linguic). With that, the city has been neutralized and integrated into Bogmian civil administration by January 1778.

Following the fall of Gasnowice, the Haldenian armies lost the foothold on the region. The following period, poetically named the "Ode of two armies", spanning from March to October 1778, was seen as a the example of a ideal maneuver warfare. Both sides denied the other large battles and minor skirmishes almost always ended indecisively.

Imperial armies, quickly gaining a support from the locals after the change of the strategy and move away from plundering locals to raiding Haldenian-held positions for supplies eventually brought the end to the period, definitevely ending in December 1778 with Imperial troops reaching outskirts of Orlobirg and encircling the city with Haldenian queen inside.

Imperial armies officially closed the last route to the city on 3rd December 1778. For the next half a year, there were 7 attempts to break through the encirclement and 3 attempts to capture the city, each and every of which failed and only weakened the said side. Imperial troops eventually decided to drain the Haldenians and then drown them, so after February 1779, most attempts to break into the city were ceased and soldiers were ordered to create a polder on river Orlava, to limit the flow of the river and later create an artificial flood with breaking of the artificial dam.

By June, the river flow was limited and the artificial lake was ready for breakthrough. On June 8th, 1779, the dam broke and flooded the city, effectively destroying any low-lying parts of the city. Queen Judita IV., after seeing the destruction, decided to lay down the arms on the end of June 1779 with surrender of all militiamen in Orlobirg by 1779.

Haldenia, formerly a kingdom, after a defeat, was declared a "Duchy", lowering its status and making it subservient to the Kingdom of Bogmia. Queen Judita was imprisoned and trail of the House of Khani bloodline disappeared with the disappearance of the queen Judita in 1783. Many historians think, that she was probably murdered or died in jail, but there are some assumptions backed by mutliple letters, that she escaped or was let out and escaped into exile. This lack of historical records was later exploited by Judita the Forgotten during the War of Judita.

After the defeat of Haldenia, Empire of Three Kings went to expand to the south of Haldenia, creating the New Bogmian March (ceded to Kingdom of Bogmia and giving border territories to the Kingdom of Zhengia, reaching approximately the extend in the West, that is currently controlled by the Federal Republic of Zhousheng and the Federation of Mustelaria.

War for the sea

In 1862, the Empire of Three Kings was slowly desintegrating from inside. From March 1861, after the abdication of the Bogmian king Julius IV. from House Leto, instability in the across-mountain territories, mainly in Archduchy of Haldenia. With the asssasination of the Haldenian Archduke in March 1862, an open power vacuum arose. With the Kingdom of Bogmia caring more about the smooth transition of power during the inevitable collapse than about the preservation of feudal system.

This political vacuum in Haldenia has been filled by Judita the Forgotten, which claimed to be the great-granddaughter of the last Haldenian queen Judita IV., although that genetical lineage has been disputed both at the time and in present. Many people, that had the feeling, that return to the Kingdom of Haldenia is the best development after the Empire of Three Kings collapses, decided to start a coup d'etat against the provisional bureaucratic government appointed by the Emperor Lagislaw III.

Haldenia during the Great War

For the whole situation, see War of the Council