As of now, Zhousheng officially registered 12 parties which did run for the latest (parliamentary) elections (2020) in all regions of Zhousheng, from which 10 managed to get their representation in the Parliament (that is getting >1% in the elections).

There are many political parties existing on regional, municipal or district levels, such as the "Movement for Bogmia" in the Bogmian, Central and Lonking regions, which attempt to create closer ties between those three Regions as a original area of the Republic of Bogmia. As of January 2021, there are about 19,800 registiered political groups, clubs, movements, or municipal groups hoping to develop their local area.

The nation-wide political parties are: 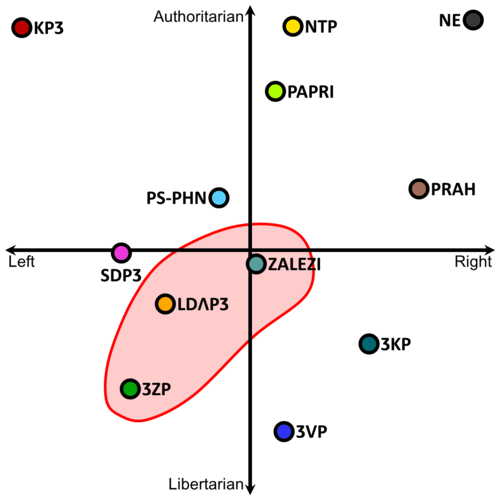 Elections are held for 36 hours. Voting rooms open at 7AM PMT on Friday and close on 7PM PMT on Saturday (6AM to 6PM PST). People can vote in the voting rooms (every municipality must have at least one voting room. In larger cities, there must be a minimum of one voting room per 10,000 people), by post (voters recieve special ballots with multiple watermarks and then they send a latter to a dedicated place by post (voting letter have purple stripe on them and are required to be delivered in less than 24 hours after the rooms close) or by a electronic device (voters enter their ID with their national passport into a specialised voting app and cast their vote from their home. Vote can be changed during the period of voting).

Zhoushi Senate has 99 seats, which are distributed proportionally per votes, but only third of the seats are replaced every 2 years and votes are offset by 2 years (meaning that it takes a minimum of 6 years to completely change a senate). Political party can get 45 seats max, ensuring the need for a coalition to control the council.

Zhoushi Parliament has 250 seats, which are distributed proportionally per votes.

Retrieved from "https://iiwiki.us/mediawiki/index.php?title=Government_of_Zhousheng&oldid=365060"
Categories:
Hidden category:
This page was last edited on 27 June 2021, at 14:09.
Privacy policy
About IIWiki
Disclaimers