Galenia, officially the Republic of Galenia (Galenian: Republika e Trekalërisë, Novalian: Republika Galenska, Piraese Galenikí Dimokratía), is a sovereign state whose territory is located in the Continent of Euclea, Kylaris. Galenia has a total area of 62,532 square kilometres and a population of 11,329,605 (as of January 2017). Galenia's only border is with Etruria to the north. The capital and most populous city is Kartha, located in the southwestern coast. Other important urban areas of the country includes Mbresht, Tallaz, Kufivalë, and Kallëm.

Galenia was originally inhabited by Gadishullorian Tribes, with the oldest found settlement dating back to the 8th BCE. During the 7th BCE, Lasithi took control over the peninsula, extending the Pirean territory further south. Following the War of the League of Maleme (272 - 259 BCE) and the Eruption at Juktas, the Galenian city-states unite under the leadership of three dominant Polis (Amphitrite, Kymo, Kymodoke), and formed the League of Galenia in 208 BCE. The League did not last long as the Solarian Empire took over the Galenian peninsula in around 90 CE. Following the Solarian Empire's fall, Galenia became a huge conglomerate of small, independent kingdoms. During the 7th century CE, important kingdoms like the Trekalërisë and the Karthë-Tallaz rose in the peninsula; during the same period of time, Marolevians started to migrate south through Novalia, inhabiting most of the northern portion of modern day Galenia. The Kingdom of Trekalërisë gradually took over the peninsula and established the Trekalërisë Empire, renamed as the Apolitan Empire following the Iconoclast Wars.

During the early 18th century, Vespasians defeated the Apolitan Empire and annexed the territory to Novalia. Galenia remained as a region of Novalia until 1879, when Apolitan priest Bujar Zogaj led the Galenian Uprising, proclaiming the independence of Galenia from Etruria. The separatist movement fails and is annexed back into Etruria only 2 months later. In March, 1880, the First Republican March saw thousands of people across the Mbresht-Kartha-Tallaz area protesting against the Etrurian monarchy and claiming independence. In 1888 the new Etrurian republican regime promoted Galenia into a Federal Territory. It remained as such until 1930, when the Galenian Republican Army (URT) declares the Second Galenian Republic as independent from Etruria and it is promptly accepted into the Entente. However, the already mobilizied Etrurian military had no struggle containig the movement in 1931 and retaking Galenia as an Etrurian Territory. Independence only came in 1946, with the conclusion of the Solarian War. The Original Republic lasted until 1961 when the Patriot Party established a military dicatorship in the country. The democratic-leftist oposition started to protest against the current government after president's Xhelal Shkreli death, resulting in a violent political atmosphere in the country. Finally in 1985, following the fall of other Military governments, the current president Skeyënder Molla gradually reestablished the Galenian democracy.

The Galenian economy is heavily based in the service, industrial and tourism sectors. Galenia is considered one of the most visited countries in Euclea and the world due to its lush beaches and summer resorts. Agriculture also takes a huge part in the economy, in specific olives and tobacco. Galenia has a big brewering industry, being one of the biggest producers of beer in Euclea. Galenia also stands out in the production of wine, though wine consumption is not common in the country. The government has a considerable control on the country's economy, holding shares in key-sectors of the economy. The Galenian state provides universal health care and education in all levels, though it common for Galenians to seek for private services, as those tend to be more efficient. Galenia is an active member of the Community of Nations, International Council for Democracy and the International Trade Organisation. The country is currently in the process of voting a formal Euclean Community membership request. 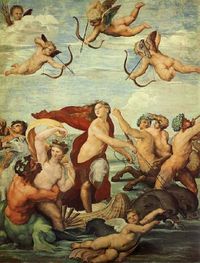 A classical paiting depicting Galene, the nereid of "calm seas."

The Ndrekë Castle, located in Kallëm, is one of the three symbolic castles of Galenia.

Retrieved from "https://iiwiki.us/mediawiki/index.php?title=Galenia&oldid=222804"
Category:
Hidden category:
This page was last edited on 29 June 2020, at 16:48.
Privacy policy
About IIWiki
Disclaimers