IIWiki is an online, web-based, free encyclopedia for the creation and display of fictional content produced by members of NationStates, though is unaffiliated with NationStates. The focus of the wiki is on Simulated and Speculative Fictional content, including Alt History, Mythopoeia, Conlang, Geofiction, and other elements of Worldbuilding. 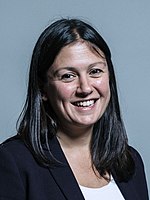 The 2021 Estmerish general election was held on 27 May 2021. It was a snap election, called for by Prime Minister Reginald Wilton-Smyth on 14 April with the intention of providing clarity following the gambled pensions scandal. All 600 Members of Parliament in the Chamber of Commons were elected. Official results were released on 29 May. The opposition Progressive Social Democrats emerged from the election as the largest party, and Zoe Halivar (pictured) announced her intention to form a minority government with support from smaller progressive parties. The results were the best for the social democratic left since the 1973 election, and the worst for the Reform Party since its foundation in 1980, and saw leader Esther Bennett lose her constituency seat. The governing Sotirian Democratic Union fell back, but retained a sizable vote share and attempted to form a government. The Greens saw a rise in their vote share, challenging Reform for third-largest party. Three new parties, Vox Estmere, future.es and the SCCA, won seats in Parliament for the first time. Voter turnout in the election was 72.85%, up 2.4% since the last election, and the highest for a national election since 1999. The PSD was seen to have reversed long-term trends by supplanting Reform as the major centre-left party, doing so by broadening its appeal and winning voters in suburban areas with a focus on social liberalism and competence. (See more...)
Suggest a Featured Article • See previous Featured Articles