For the Portal page, see Portal:Eurth.

Eurth, also known as Earth (Anglish), Alemi (Oharic), or Aerta (Alemannisch), is the fourth planet from the San. It is the only heavenly body in the cosmos known to accommodate life. There are eight million types of animals and plants in the Wurld. Eight million different solutions to staying alive. Scientific analysis and radiometric determination have concluded that Eurth developed over 4 billion years ago. The Eurth rotates around the San in 365 and ¼ days, a period commonly accepted as Eurth year. The seasons are formed by the inclination of the rotational axis in the direction of the orbital surface.

The Mun is an astronomical body that orbits planet Eurth. It is Eurth's only stable natural satellite. The gravitational relation between Eurth and the Mun has many effects: it causes oceanic tides, stabilisation of the planetary axis, and gradual reduction of Eurth's spin. Eurth is the most solid planet in the Sanar System, and the largest of the Eurrestrial planets.

The world contains a large variety of nations where the people speak many languages, such as Anglish, Tagmatine, Adapton, Suverin, Oharic, and Iverican. They also speak thousands of other languages. According to the latest census data, the Eurth is home to about 5 billion human beings.

The current Anglish word Eurth evolved from an earlier variant of Early Anglish or Old Alemmanisch. The earliest sources mention eorðe as a translation of gaia in Occidental Arhoman and erta in East-Arhoman. In this context, it refers to the ground or dry soil in contrast to the wet sea. In Oharic the word alemi translates to "world".

Eurth has an approximate total land area of 131,750,000 km2 (50,870,000 sq mi). The remaining 74.17% is covered by water. The land is divided into seven continents. A continent is one of several very large landmasses of the world. Identified by convention rather than any strict criteria, we commonly regard up to seven regions as continents. Ordered alphabetically, these continents are:

Eurth is a blue planet. The presence of water on its surface is unique in the Sanar system. The main bodies of water in the hydrosphere are the oceans. Ancient Aroma describes the existence of Seven Seas. Since the Elevation these are considered to be the seven oceanic bodies of water: Adisi Ocean, Adlantic Ocean (north and south), Antargic Ocean, Argic Ocean and Oriental Ocean (north and south). The deepest underwater location is the $Name Deep of the $Name Trench in the $Select Ocean, with a depth of $Number m ($Number ft). Minor seas include: Azure Sea, Canamo Sea, Dolch Sea, Kosscow Sea, Qingming Sea, Raga Sea, Sunset Sea, Verde Sea, Whanganui Sea, Ygros Sea.

(Explain lithosphere. Which is the oldest plate? Where are the oldest rocks? Explain subduction. List the major tectonic plates from largest to smallest. Any difference between fast and slow pates?)

The San and its planets[8]

Around 650 BCE, most people believed the Eurth was flat with a sky hanging above it. It wasn't until Classical philosopher Proximander (c. 620 – c. 550 BCE) came along that people began to see that the sky was surrounding us. Later, Aroman philosophers hypothesised that the San, Mun, planets and stars revolved around the Eurth. Humanity held this Eurth-centric view of the universe until the Post-Classical Era. This is when Victor Bronzicus (1464–1523) theorised that the San was really at the centre, with the Eurth, stars and planets revolving around it. Eventually, the scientific establishment accepted his argument. By the early 20th Century, astrophysicists discovered our galaxy to be part of an immeasurably larger cosmic design than what previously thought. Eurth is a mere dust cloud in a universe of galaxies. Then came Hana Sitayini (1897–1966), whose work showed a curved universe. Prior to that, people believed it was flat. She posited that its wavy surface even collected mass so dense as to create canyons, later known as black holes. This leads us to the present-day recognition of a gradually expanding universe, whose extraordinary origin shaped the life we know today. 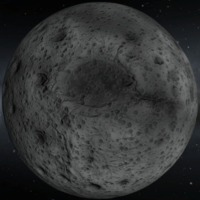 Photograph of the Mun[9]

The Mun is a relatively large, terrestrial, planet-like natural satellite. The gravitational attraction between Eurth and its moon causes the ocean's tides. Some scientists believe the Mun may have dramatically affected the development of life by moderating the planet's climate. The name of the Mun varies in different cultures, being known variously as Muna in Arhoman, Mun in Anglish, Ayibi in Oharic. As of 2020, there were 704 operational, human-made satellites orbiting the planet. There are also inoperative satellites and over 9,000 pieces of tracked space debris. Eurth's largest artificial satellite is the EOS Space Station.

Retrieved from "https://iiwiki.us/mediawiki/index.php?title=Eurth&oldid=448766"
Categories:
Hidden categories:
This page was last edited on 17 January 2022, at 10:44.
Privacy policy
About IIWiki
Disclaimers