The Royal Society of Medics (Trellinese: Ezhaië Asra Lankrinirin; Ahéri: Qinan Sara int'Saman) is a humanitarian organisation that provides emergency assistance and disaster relief throughout Trellin and Hysera, including Arimathea, the Isles of Velar and Txekrikar. The Royal Society is a constituent member of the Astyrian Federation of Red Cross Societies since 1886. Originally established to provide basic healthcare across the colonial Trellinese Empire, the Society evolved into a disaster relief organisation from the late nineteenth century. It is one of the largest non-governmental organisations in Trellin in terms of both budget and staff and is generously endowed by the Sidereal Crown. It is designated by royal edict as the primary disaster relief association in all the territories in which it operates with the exceptions of Kur'zhet and Cadenza (with the double exception of Laeryt.

The Royal Society was established in 1716 by members of the Royal Surgical College at Tanzigar. As Trellin's chief port, the doctors at Tanzigar were acutely aware of the medical needs of the Trellinese Empire's provinces, and there was at this time no impetus from the monarchy to provide doctors overseas. The college's surgeons therefore conceived of the Society as a humanitarian body, which would send college-trained medics to the colonies to ensure a high standard of healthcare. The Society received an endowment from King Lonaki III in 1720 and used this fund to substantially increase the college's enrollment and the numbers of medics stationed in the provinces.

By the latter half of the eighteenth century, provincial administrations had assumed the duty of healthcare provision in most of the empire's territory. In newly-settled areas, such as Khatax, the Society continued to occupy this role until the 1820s, and Society-appointed medics remained posted to towns across the south for decades. By this time, the Society acted largely as an accrediting and advisory body, although it maintained substantial manpower, equipment and financial reserves. The Halith Disaster, which occurred in 1883 and saw the devastation of the capital of Rezat, spurred the Society to develop into a disaster relief organisation. Inspired by the methods and mission of the Red Cross societies which sent aid to Halith, the Society joined the Federation in 1886. 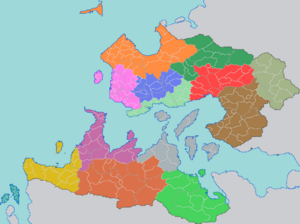 The Royal Society's disaster relief administration across Trellin and its empire is divided into thirteen units. The table below and map at right demonstrate the jurisdictions of these units. In practice, only twelve of these are functional units, as the Society is not a primary disaster relief association in its Island-west unit which covers Cadenza and Kur'zhet. These units are arranged roughly on the basis of typical topography — for example, the River-central unit includes most of the upper course of the River Tanz and the provincial subdivisions which fall within its drainage basin. Thus, each unit is intended to be specialised in at least one terrain — mountain, rainforest, etc. 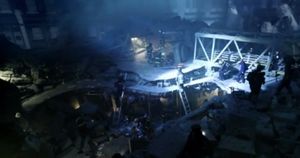 Royal Society personnel on the scene of the 2016 Cavari bombing

Royal Society personnel are often among the first to respond to disaster situations in Trellin and Hysera. The organisation possesses a strong track record in providing relief following earthquakes and hurricanes, which are common occurrences in the region. The Society was the first of many NGOs from across Astyria to respond to the 2014 eruption of Kaië Ryio'qi, in southwest Azmir, which killed 863. The Society deployed considerable resources, above and beyond those of its East-central unit which had jurisdiction, to Cavari in the wake of the August 2016 Cavari bombing which killed 153. Since 2014, when Trellin reopened its borders to the wider region, the Royal Society has actively liaised with other Astyrian Red Cross Societies in providing training and support. Its personnel have participated in disaster relief and support roles in Andamonia, Kelonna and Maqtajer, among other locations.