Zamastan, who had intercepted and shot down dozens of West Chanchajillan missiles on February 23rd, resolved to help Eastern forces by conducting airstrikes on March 1st[6], a campaign which would last for the remainder of the conflict. Eastern officials stated on numerous occasions that the inclusion of Zamastanian air superiority resulted directly to the speed at which Eastern forces advanced throughout the country. Despite being stalled after capturing Omi[7], Eastern forces managed to break the resistance and force the Western forces into a strategic retreat to the capital of Ivora. On March 16th, the cities of Vicalvi, Anamosori, and Treviso were captured[8], as was the nuclear facility in Treviso. The fall of these cities, in addition to the capture of Accadia two days later, meant the capital of Ivora was surrounded completely.

On March 22nd, 2021, Parabocan forces joined the conflict following a treaty signed between President Garr'n Cardoza and President Boer[9]. The offensive now targeted Ivora, with the intention to capture the city, locate and capture Frederick Armbar, and overthrow the government and military rule. On March 24th, Presidents Boer, Cardoza, and Moreau met in Vilanja[10] to discuss establishing a new tri-national run interim government following the inevitable capture of the city. However, fighting lasted longer and became more brutal than anticipated in Ivora. Armbar was killed on April 9th, and Ivora fell on April 17th. On May 1st, major combat operations ended[11] and became relegated to peacekeeping and moderating pockets of resistance.

The war resulted in the end of the tyrannical socialist rule in West Chanchajilla, with Frederick Armbar and his loyalists being pushed out of political power. The East Chanchajillan, Parabocan, Zamastanian, and Janapan governments helped organize a national referendum for a new National Assembly on August 4th, 2021, the first free elections that West Chanchajilla had ever experienced[12], electing Juan Diego Barrios. The war was officially declared over with the end of a pro-Armbar insurgency on September 28th, 2021. Since the end of the war, the two nations have worked to mend diplomatic, economic, and cultural relations, with much of the East's allies in WEDA assisting in economic development programs.

Tensions between the East and the West had existed ever since the Chanchajillan Civil War. The civil war was fought from 1932-1944 between rebel capitalist-republican forces of East Chanchajilla and socialist-anarchist forces of West Chanchajilla. Due to the international political climate at the time, the war had many facets and was variously viewed as class struggle, a war of religion, a struggle between dictatorship and republican democracy, between revolution and counterrevolution, and between fascism and socialism. The war began after a declaration of military opposition against the socialist controlled government by a group of republican generals of the Chanchajillan Republican Armed Forces, originally under the leadership of Gonzal Jimoth. The government at the time was a coalition of communist and socialist parties, under the leadership of far-left President Manuel Besterio and supported by military units in some important cities in the Eastern half of Chanchajilla — such as Vilanja, Mirinu, and Pretesia. This left Chanchajilla militarily and politically divided. The Republicans and the Socialist government fought for control of the country. The Republican forces received munitions, soldiers, and air support from Zamastan, while the socialist side received support from Gladysynthia and Drambenburg. Tens of thousands of citizens from non-interventionist countries directly participated in the conflict. They fought mostly in the pro-Republican International Brigades, which also included several thousand exiles from pro-socialist regimes.

The republican forces of East Chanchajilla officially won the war, which ended in 1944, by achieving their ultimate goal of separating from the Western government and forming their own nation. Once the hostilities ended, the government of West Chanchajilla declared the militarization and hard border separation from the newly organized Eastern government. The war became notable for the passion and political division it inspired and for the many atrocities that occurred, on both sides. The war served as a precursor to the World War, and major fighting continued to persist in Chanchajilla well into the World War as Drambenburgian forces warred Avergnonian armies. Organised purges occurred in territory captured by the West's forces so they could consolidate their future regime in their now divided country. Mass executions on a lesser scale also took place in areas controlled by the Republicans, with the participation of local authorities varying from location to location. During the remainder of the 20th and early 21st centuries, several flare ups of violence across the borders of the two nations occurred, including the 1972 Chanchajilla War and the South Turania Offensive (2019).

In 2018, President Andres Obrahoma was charged with drug trafficing charges and conspiracy of fraud, which led to his resignation and subsequent arrest on December 1st, 2018. He was replaced by Vice-President Gideon Boer. In May of 2019, a border skirmish in the province of Turania between East and West troops led to the South Turania Offensive. The cause of the war was the infiltration of Western soldiers disguised as militants into positions on the Eastern side of the LOC, which serves as the border between the two states. During the initial stages of the war, West Chanchajilla blamed the fighting entirely on independent Turania insurgents, but documents left behind by casualties and later statements by West Chanchajillan dictator Frederick Armbar showed involvement of West Chanchajillan paramilitary forces. The East's Army, later supported by the East's Air Force, recaptured a majority of the positions on the East side of the LOC infiltrated by the Western troops and militants. Facing international diplomatic opposition, the Western forces withdrew from the remaining Eastern positions along the LOC. The war ended with the signing of the Treaty of Turania, moderated by Rio Palito.

The damage at the General Directorate of Vicalvi following the coup

On February 23rd, 2020, tens of thousands of people took to the streets of West Chanchajilla's urban centers in Ivora, Vicalvi, and Accadia alongside dissenting military generals in an attempt to overthrow local and federal government positions. Military officials and statements coming from state media said that there were "several instances of violent and sporadic fighting between terrorists and military personel at key government sites across the nation," and that "President Armbar was the target of an assassination attempt." Armbar's highest staff claimed, without specifying evidence, that Zamastan, East Chanchajilla, Caspia and Quetana were directly backing the perpetrators. They also confirmed that several hundred suspected perpetrators have been arrested and that massive purge manhunts are underway

Online amid the flurry of underground social media coming out of the closed and isolated country, supposed leaders of resistance movements claimed that a coup d'état was attempted in West Chanchajilla against state institutions, including the government and President Frederick Armbar. The attempt was carried out by a faction within the West Chanchajillan Armed Forces that organized themselves to seize control of several key places in Ivora, Iuani, Aboutal, and elsewhere, but failed to do so after forces loyal to the state defeated them. The alleged perpetrators cited the nation's "history of erosion and a complete elimination of democratic rule, disregard for human rights, and a loss of credibility in the international arena as reasons for the coup", according to a statement posted by resistance members living in asylum in both East Chanchajilla and Paraboca. There were several known resistance movements against the military regime in West Chanchajilla, and while some received funding and support from the East in past conflicts, (such as the Turania Offensive of 2019), there is no known evidence that Zamastan or Quetana support the insurgent forces.

Following the coup, dozens of people were executed in the West Chanchajillan capital of Ivora in a broadcast that was channeled live on West Chanchajillan television stations. Armbar spoke against the accused perpetrators who he claimed were responsible for the coup with backing from East Chanchajillan, Zamastanian, and Quetanan sources. The dictator then gave a command for the accused perpetrators to be brought out into the square in front of his palace and government offices, where for the next hour and a half, 57 people were executed live on state-run television. The methods of executions were varied, alternating between firing squads and hangings.

President of Zamastan Foley Sakzi condemned the executions and once again called for Frederick Armbar's resignation and removal from power, while maintaining that the Zamastanian government had no role in the coup. President of East Chanchajilla Gideon Boer also condemned the executions, while at the same time denying involvement but stating support for the coup. On February 27th, however, Derick'a Banna, who was the Chief of the People's Army of Chanchajilla, was assassinated by ZIS agents in a San Beausoleil, Rio Palito, hotel room. Armbar was reportedly furious, making a public statement saying "The Zamastanians stop at nothing to dismantle our strides," Armbar said, "and they are no doubt the masterminds of Baana's death. Death to Zamastan will follow suite and justice will be done to the devils of Z.I.S.. Foley Sakzi, who is also a devil, will burn for his crimes of murder." The ZIS initially denied the assassination, but on March 1st Kirk Faulkman admitted that they were behind the assassination.

Martin Saint-Yves, the leader of Ossinia, visited Armbar in March, attempting to convince Armbar to retaliate against Zamastan by bombing manufacturing plants in Blythe, Mayotte. Armbar refused, fearing a conflict with Zamastan. In May, Saint-Yves was captured by Zamastanian forces during the Zamastanian invasion, further worrying Armbar and his closest aides that Zamastan was preparing to take down his government in a similar fashion if they dared retaliate or attack Zamastanian targets as Saint-Yves did. 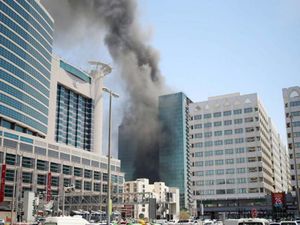 Smoke rises following the terror attack on a cafe in Vilanja on February 18th, 2021

Multiple heads of state internationally called for both sides to cease hostilities, with President Tony Blanian of Constantio stating his commitment to seeing the "tyrannical regime end their reign of terror", while also calling for "restraint and moderation" from the governments of East Chanchajilla and Paraboca, who had both placed their national militaries on high alert and indications of retaliatory strikes were becoming more and more evident.

"Armbar is the epitome of evil, mark my words and don't take my words away from their literation," Blanian said, "he continuously proves to the world that he cares not for human life. While we stand with our allies of East Chanchajilla and President Boer's government, we urge that they commit to restraint and moderation. A wider war is not what we want to see, especially in the context of humanitarian disasters spreading across the world nowadays."

President Akram Sulaiman of Emmiria addressed the Emmirian Consultative Assembly in an emergency statement to formally condemn West Chanchajilla and Frederick Armbar for the first time, stating "Cease your actions, Armbar, you must stop this violence."

Zamastan's missile defense system had intercepted dozens of rockets during the course of the attack[17], and Secretary Camille Boffrand stated that "50 missiles intercepted is a good sign of our readiness, but it should have never happened. We shouldn't have had to shoot down these missiles. West Chanchajilla overstepped. They tried to kill Zamastanians today. Mark my words and hear me clearly. Zamastan stands firmly with East Chanchajilla through their efforts to remove the threat of destruction, and as we have seen firsthand today, West Chanchajilla marks us in a similar regard. On behalf of President Atticus Moreau, Zamastan will respond forcefully." 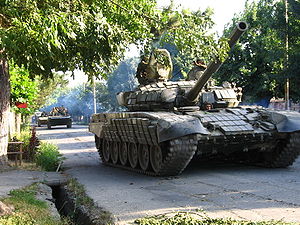 East Chanchajillan tank column moves through Treviso during the war.