Frederick Armbar (born 1 January 1974, died 9 April 2021) was a West Chanchajillan politician and military-man who served as the President of the People's Republic of Chanchajilla from 2005 until his death in 2021 during the 2021 Chanchajilla War. He came to power when his mentor, President Parish White passed away, transitioning his seat of Secretary-General to a more executive function. He ruled West Chanchajilla by decree ever since through powers granted to him by the ruling party legislature and military dictatorship.

Multiple governments, most significantly WEDA, CAMDA, Drambenburg, and Cadair did not recognize him as the legitimate leader of West Chanchajilla, and Armbar's administration was deemed "responsible for grossly mismanaging the economy and plunging the country into a deep humanitarian crisis". Additionally, the regime has been accused of attempting to "crush the opposition by jailing or exiling critics, and using lethal force against anti-government protesters" by several nations. However, his regime was supported by Yuan, Syraranto, Great Epsilon, and the DSC. Armbar has been described as a "dictator", and a Zamastanian Intelligence Service report determined that crimes against humanity were committed during his rule. Under Armbar's administration, more than 89,000 people were executed for “resistance to authority” and more than 3 million Chanchajillans were forced to flee the country. He also directly supported the regime of Kyriakos Tasoulas in Syraranto during the 2020-21 Civil War, and has been linked to aiding the M.L.F. and Al-Fijar terrorist groups.

Armbar ruled West Chanchajilla sternly and with complete authoritarian control until the 2021 military offensive by East Chanchajilla and Paraboca ousted his government. He was killed in a gunfight with Coalition forces on April 9th, 2021. 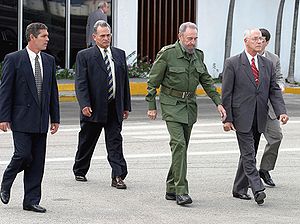 The cause of the war was the infiltration of Western soldiers disguised as militants into positions on the Eastern side of the LOC, which serves as the border between the two states. During the initial stages of the war, West Chanchajilla blamed the fighting entirely on independent Turania insurgents, but documents left behind by casualties and later statements by West Chanchajillan President Frederick Armbar showed involvement of West Chanchajillan paramilitary forces. The East's Army, later supported by the East's Air Force, recaptured a majority of the positions on the East side of the LOC infiltrated by the Western troops and militants. Facing international diplomatic opposition, the Western forces withdrew from the remaining Eastern positions along the LOC. The war ended with the signing of the Treaty of Turania, moderated by Rio Palito.

The war is one of the most recent examples of high-altitude warfare in mountainous terrain, which as such posed significant logistical problems for the combating sides. 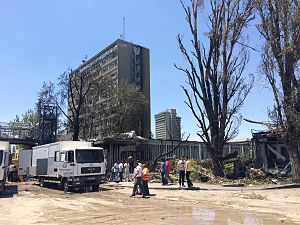 The damage at the General Directorate of Vicalvi following the coup

On February 23rd, 2020, tens of thousands of people took to the streets of West Chanchajilla's urban centers in Ivora, Vicalvi, and Accadia alongside dissenting military generals in an attempt to overthrow local and federal government positions. Military officials and statements coming from state media said that there were "several instances of violent and sporadic fighting between terrorists and military personel at key government sites across the nation," and that "President Armbar was the target of an assassination attempt." Armbar's highest staff claimed, without specifying evidence, that Zamastan, East Chanchajilla, Caspia and Quetana were directly backing the perpetrators. They also confirmed that several hundred suspected perpetrators have been arrested and that massive purge manhunts are underway

Online amid the flurry of underground social media coming out of the closed and isolated country, supposed leaders of resistance movements claimed that a coup d'état was attempted in West Chanchajilla against state institutions, including the government and President Frederick Armbar. The attempt was carried out by a faction within the West Chanchajillan Armed Forces that organized themselves to seize control of several key places in Ivora, Iuani, Aboutal, and elsewhere, but failed to do so after forces loyal to the state defeated them. The alleged perpetrators cited the nation's "history of erosion and a complete elimination of democratic rule, disregard for human rights, and a loss of credibility in the international arena as reasons for the coup", according to a statement posted by resistance members living in asylum in both East Chanchajilla and Paraboca. There were several known resistance movements against the military regime in West Chanchajilla, and while some received funding and support from the East in past conflicts, (such as the Turania Offensive of 2019), there is no known evidence that Zamastan or Quetana support the insurgent forces.

Following the coup, dozens of people were executed in the West Chanchajillan capital of Ivora in a broadcast that was channeled live on West Chanchajillan television stations. Armbar spoke against the accused perpetrators who he claimed were responsible for the coup with backing from East Chanchajillan, Zamastanian, and Quetanan sources. The dictator then gave a command for the accused perpetrators to be brought out into the square in front of his palace and government offices, where for the next hour and a half, 57 people were executed live on state-run television. The methods of executions were varied, alternating between firing squads and hangings.

President of Zamastan Foley Sakzi condemned the executions and once again called for Frederick Armbar's resignation and removal from power, while maintaining that the Zamastanian government had no role in the coup. President of East Chanchajilla Gideon Boer also condemned the executions, while at the same time denying involvement but stating support for the coup. On February 27th, however, Derick'a Banna, who was the Chief of the People's Army of Chanchajilla, was assassinated by ZIS agents in a San Beausoleil, Rio Palito, hotel room. Armbar was reportedly furious, making a public statement saying "The Zamastanians stop at nothing to dismantle our strides," Armbar said, "and they are no doubt the masterminds of Baana's death. Death to Zamastan will follow suite and justice will be done to the devils of Z.I.S.. Foley Sakzi, who is also a devil, will burn for his crimes of murder." The ZIS initially denied the assassination, but on March 1st Kirk Faulkman admitted that they were behind the assassination.

Martin Saint-Yves, the leader of Ossinia, visited Armbar in March, attempting to convince Armbar to retaliate against Zamastan by bombing manufacturing plants in Blythe, Mayotte. Armbar refused, fearing a conflict with Zamastan. In May, Saint-Yves was captured by Zamastanian forces during the Zamastanian invasion, further worrying Armbar and his closest aides that Zamastan was preparing to take down his government in a similar fashion if they dared retaliate or attack Zamastanian targets as Saint-Yves did.

On January 25th, 2021, A West Chanchajillan businessman and a personal lawyer for Armbar named Federico Casoula was carrying a letter from Syrarantoan President Kyraikos Tasoulas accrediting him to Armbar when he was arrested on a Jyaueze warrant in Gutaai. Jyaueze authorities arrested Mr. Casoula in cooperation with a Zamastanian Intelligence Service contracted sting operation, after it was suspected he was trying to make a secret deal to trade nuclear material to the Tasoulas regime from Armbar. The letter found on Casoula was from Tasoulas, asking Armbar for weapons, medicine, and monetary funding for his government forces. Lawyers for Federico Casoula made the filing in Jade Harbor federal court just hours after prosecutors in the Jyau said they granted the 49-year-old Chanchajillan house arrest as he fought extradition to the Zamastan to face money laundering charges. Jyaueze and Zamastanian officials believed Casoula held numerous secrets about how Armbar, his family and top aides allegedly siphoned off millions of dollars in government contracts amid widespread hunger in the oil-rich nation. He was detained in June 2020 when his jet made a refuelling stop on a flight to Covijo, where he was allegedly sent to negotiate deals to exchange Syraranto gold for Chanchajillan petrol. Weeks after, the civil war broke out in Syraranto.

On February 14th, 2021, an agent of Frederick Armbar named Tomas Alarcón attempted to assassinate prominent East Chanchajillan prosecutor Rodrigo Carballal in Meguén by bombing a concert he and his family were attending for the 70th Republic Day celebrations. The terrorist attack failed to kill Carballal, but resulted in the deaths of 76 people and hundreds of injuries. Days later, a second attack in Vilanja killed 21[1], also with the intention of killing a prominent lawmaker. On February 23rd, Armbar ordered the West Chanchajillan military to launch a series of missile attacks across the Northwestern provinces of East Chanchajilla in the cities of Turania, Nortagate, and Vilanja that killed 542 people and injured thousands. [2] President Boer put the nation's military on high alert and undertook retaliatory airstrikes.[3] The airstrikes soon progressed into a ground offensive, with East Chanchajillan forces advancing beyond the border and capturing the city of Omi within days[4].

Zamastan, who had intercepted and shot down dozens of West Chanchajillan missiles on February 23rd, resolved to help Eastern forces by conducting airstrikes on March 1st[5], a campaign which would last for the remainder of the conflict. Eastern officials stated on numerous occasions that the inclusion of Zamastanian air superiority resulted directly to the speed at which Eastern forces advanced throughout the country. Despite being stalled after capturing Omi[6], Eastern forces managed to break the resistance and force the Western forces into a strategic retreat to the capital of Ivora. On March 16th, the cities of Vicalvi, Anamosori, and Treviso were captured[7], as was the nuclear facility in Treviso. The fall of these cities, in addition to the capture of Accadia two days later, meant the capital of Ivora was surrounded completely.

On March 22nd, 2021, Parabocan forces joined the conflict following a treaty signed between President Garr'n Cardoza and President Boer[8]. The offensive now targeted Ivora, with the intention to capture the city, locate and capture Frederick Armbar, and overthrow the government and military rule. On March 24th, Presidents Boer, Cardoza, and Moreau met in Vilanja[9] to discuss establishing a new tri-national run interim government following the inevitable capture of the city. However, fighting lasted longer and became more brutal than anticipated in Ivora. Armbar was killed on April 9th, and Ivora fell on April 17th. On May 1st, major combat operations ended[10] and became relegated to peacekeeping and moderating pockets of resistance.

The war resulted in the end of the tyrannical socialist rule in West Chanchajilla, with Frederick Armbar and his loyalists being pushed out of political power. The East Chanchajillan, Parabocan, Zamastanian, and Janapan governments helped organize a national referendum for a new National Assembly on August 4th, 2021, the first free elections that West Chanchajilla had ever experienced[11].