Atticus Justin Moreau is a Zamastanian politician who is currently serving as the 34th President of Zamastan, winning the 2020 Zamastan presidential election following Foley Sakzi's announcement that he would not seek reelection to a second term. Before the presidency, he served as the Governor of the Province of Alutia, a seat he held from 2006 until his resignation in 2016. He is a member of the Bloc Mayotte (BMZ) and helms considerable influence in the Independence Bloc parties.

Born in Alutia, Moreau attended Brebeunne College and graduated in 1994, and then attended and graduated from the University of Tregueux in 1998. He has a bachelor of arts degree in literature and a bachelor of education degree. After graduating, he worked as a teacher in Alenchon City, Alenchon.

As Governor of Alutia, major provincial government initiatives he undertook during his first term included legalizing recreational marijuana through the Alutia Cannabis Act, attempting provincial legislature appointment reform by establishing the Advisory Board for Provincial Appointments, and establishing a massive tax cut for middle class and small business families.

Atticus Moreau was born on October 25, 1971 in Alutia to Aaron and Arnette Moreau. Aaron, a second-generation immigrant from Drambenburg, and Arnette, a second-generation immigrant from Avergnon, both came from families that had fled to Zamastan during the World War, albiet from opposing sides. At age four, Atticus' family moved to Saint Bellevue, Alutia. Moreau attended Brebeunne College and graduated in 1994, and then attended and graduated from the University of Tregueux in 1998. He has a bachelor of arts degree in literature and a bachelor of education degree. After graduating, he worked as a teacher in Alenchon City, Alenchon. Moreau was the president of the Bloc Mayotte's riding association in Alutia Center from 1997 to 2003 and was an unsuccessful Bloc Mayotte candidate in the 1998 provincial election, losing to parliamentary cabinet minister Pierre Dettigrew in the city of Papineau. He has been a long-time advocate for strengthening measures requiring the predominance of the French language in Alutia, as well as for Alutian independence.

In 2006, he won the provincial election for governor, becoming the highest ranking separatist politician in Zamastan. In 2011, he unsuccesfully launched a referendum to declare independence for Alutia province, but it was soundly defeated by a wide popular vote margin. In the weeks following the failure of the referendum, a number of riding executive members quit the party to protest Moreau's leadership and a number of individuals who had been considering running for the party in the next election removed themselves from consideration. On August 12, 2011, the party's parliamentary caucus was reduced to 3 MPs after House Leader Jean-François Pauline quit the party to sit as an Independent MP. Pauline accused Moreau of "pushing a unidimensional, intransigent agenda that lacks rigour has put an end to the credibility established by (former leaders) Gilles Ducieeke, a leader who merits great respect." On August 25, 2011, André Derallavance, who had lost to Moreau in the leadership vote also resigned, reducing the Bloc to two MPs. Derallavance told a press conference, in regards to Moreau: "His vision and orientation for the Bloc are diametrically opposed to mine. Mr. Moreau says he can unite the party; for me it’s not the case."

In November of 2012, legislation to legalize cannabis for recreational use was passed by the Alutian House of Commons. It passed second reading on March 22, 2013. On June 18, 2013, the provincial legislature passed the bill with most, but not all, of the House of Commons' amendments. Governor Moreau announced the next day that recreational use of cannabis would no longer violate provincial criminal law as of October 17, 2013, effectively legalizing it for both recreational and medicinal use. On the first day of legalization, the Government of Alutia announced that it intended to grant pardons to Alutians convicted of simple cannabis possession charges. 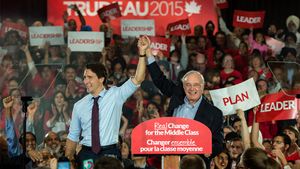 Atticus Moreau and Governor Thounan Bouchard of Alutia at a campaign rally in Alenchon on July 11th, 2020.

On October 27th, 2019, Moreau announced his intention to run for President of Zamastan, joining the 2020 Zamastan presidential election. In the first Presidential debate on June 27th, 2020, Moreau rose prominently in the polls with his defence of his separatist and independence ideological voting record by saying that he was very devoted to his community and his province, and at the time was passionate about increasing autonomy for provinces, concluding by saying;

“As president, I will sponsor greater autonomy for provinces, strip federal guidelines that restrict civil and provincial freedoms, but I will never sign away a province’s attempt to leave the republic as president.”

Following the second debate on July 23rd, Moreau soared to the top of polls for the six declared candidates [1]. Moreau pressed supporters and undecided voters to adopt his new progressive platforms, which included softening of gun control legislation (which he provided would mainly include stronger background checks to replace the current ban on assault weapons), further reproductive rights (including a call to end Zamastan’s third-trimester abortion ban), the federal legalization of marijuana, and a more lenient immigrant acceptance program. Moreau also called for stripping economic protection restrictions in order to allow for more oil drilling and fracking, as well as for corporations to have more access to foreign contracts. He also called for tax breaks for middle class families and small businesses. 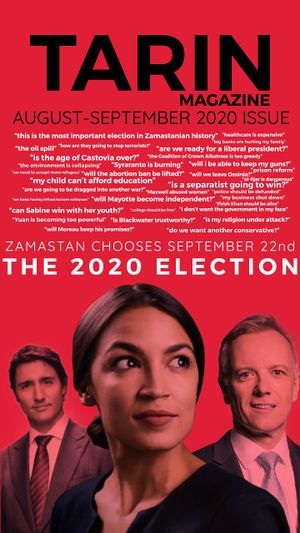 The third and final Presidential debate took place on August 22nd, one month before the election. This time, the only candidates in attendance were Armitage, Moreau, Blackwater, and Wolffe, with Gunn and Lultquist having fallen far behind in the polls. Among the most pressing issues in the debate was the quickly unraveling civil war in Syraranto and the Jurrania Shore Oil Spill, drawing debate into how Zamastan should respond to the government of President of Syraranto Kyriakos Tasoulas beyond sanctions as well as environmental regulation and overwatch. Both of the events being discussed were quickly becoming the blackstains on President Sakzi's administration, since the sanctions at this point were largely being considered inneffective and the response to the oil spill were delayed due to poor management. In addition, the resignation of Larious Maxwell from his position of Speaker of the Chamber following dozens of sexual misconduct allegations prompted the question of ethics amongst candidates and their respective parties. Moreau came out on top once again, saying that although he believed President Sakzi and Secretary of State Avi Tremblan were trying their best to quell the situation in Syraranto, they had so far failed and the situation would not be under control by the time Sakzi left office. He then promised that although he would not commit to ground forces in the region, he was not opposed to backing rebel forces through supplies, aid, or even air superiority. Armitage committed that she would send ground troops if elected, a comment which is believed to have contributed greatly to her loss.

As the debates finalized and polling began to ramp up, Moreau was widely seen as the candidate most likely to win. However, on September 12th, President Sakzi decided to endorse Armitage for President, stoking fears in Moreau's campaign that this high profile endorsement of his opponent would cause his campaign to falter greatly. September 22nd saw election day, as voter turnout spiked to a 10-year high. Moreau managed to win nearly the entirity of the Eastern bloc of the country, including the entirity of his home province of Alutia. He also managed to win key districts in historically conservative and liberal provinces, which secured his victory in the race. Ultimately, Moreau won 139 district votes as opposed to Armitage, who finished second with 108. Cain Blackwater, who came in third, managed 80 votes. 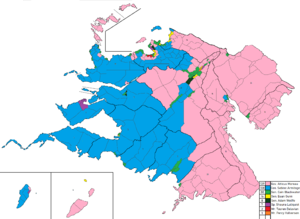 The election result map of the 2020 election.

Moreau and the first three confirmations of his cabinet, Secretary of State Jessiah Vallotis, Secretary of the Treasury Mara Orlandi, and Secretary of Defense Camille Boffrand were confirmed by newly elected Speaker of the Chamber Natasha Chastain on September 23rd, 2020, at Congressional Hall in Tofino, Zian. Attending the innauguration were 3 of the 4 living former-Presidents Foley Sakzi, Zacharias Castovia, and Quinn Werner (Anya Bishop refused the invitation to attend). The four Presidents, for the first time in Zamastanian history, met together in the Zian Presidential Mansion to discuss policy, world events, and general fellowship between the former leaders. 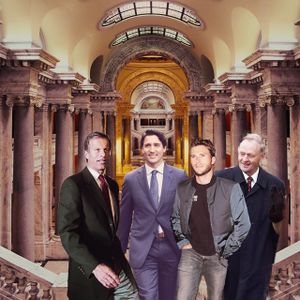 Moreau intends to halve child poverty in Zamastan within a decade. In October 2020, Moreau announced the start of his government's flagship Families Package. Among its provisions, the package gradually increased paid parental leave to 26 weeks and paid Z$60-a-week to low and middle-income families with young children. In 2021, the government began the roll-out of a school lunches programme to assist in reducing child poverty numbers. Other efforts to reduce poverty have included an increase to main welfare benefits, expanding free doctor's visits, providing free menstrual hygiene products in schools and adding to state housing stock. Economically, Moreau's government has implemented steady increases to the country's minimum wage and introduced the Provincial Growth Fund to invest in rural infrastructure projects.

In one of his first acts as President, Moreau met with Western Euronia Defense Alliance leaders in private on September 25th in Vongane, Quetana, for his first foreign trip to discuss possible intervention covertly to support the rebels, trying to avoid the overt risk of drawing an expanded conflict into Syraranto while also stopping any possible humanitarian disaster from evolving out of control. President Callum MacTavish of Ruskayn had urged Moreau to assemble routine relief supply missions to Syraranto to be airdropped into heavily affected rebel areas. Moreau and Secretary Vallotis arranged a meeting with North Icadanian Chancellor Gianni Roussilis and Vuswistani President Panagiotakis Nicolalis to use their airspace to fly sorties into Syraranto. From September 30th to October 6th, Zamastanian crews aboard Vuswistani planes flew over Syraranto from North Icadania and dropped over 400,000 tons of supplies; mostly food and medical, into Western Syraranto.

On October 10th, Defense Secretary Camille Boffrand was the target of a Kyriakos Tasoulas-sponsored assassination attempt while traveling in Vilanja, East Chanchajilla, leading to Moreau and his administration agreeing to station the 2nd Fleet to the Sotoa Sea as a warning to the Tasoulas regime and Great Epsilonian forces.

Additionally at the September 25th WEDA conference, Moreau and the allied leaders discussed the ongoing threats from the terrorist group Al-Fijar, which days before the 2020 election had bombed Air Andaluni Flight 553, killing 178 people, and attempted to blow up a Durnstaal plane and a popular tourist spot in Viitaniemi, Caspia. Moreau instructed Zamastanian Intelligence Service director Kirk Faulkman to investigate and hunt down any suspected terrorists in as much secrecy as possible, working in tandem with the Central Intelligence Bureau of Durnstaal.

Retrieved from "https://iiwiki.us/mediawiki/index.php?title=Atticus_Moreau&oldid=253215"
Categories:
Hidden categories:
This page was last edited on 22 September 2020, at 23:13.
Privacy policy
About IIWiki
Disclaimers