Bay of Montecara at center

The bay was formed by the pyroclastic flow of the now-extinct volcano Monte Cara. It is notably deep for its relatively small area, and its unusually cold water by the standards of the region makes it attractive to fish, making it known for its abundant sea life. The deep channel also makes it accessible to shipping.

The upper part of the bay is relatively narrow with steep sides, leaving room for only a small rim of settlement around its edges in parts. 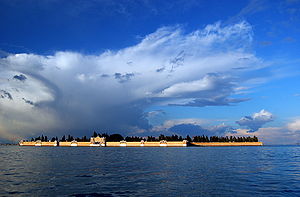 The bay covers an area of approximately 85 km². The outlet to the Solarian Sea is 1.2 km across; at its narrowest, the lower bay is just slightly wider at 1.3 km, and the passage between the lower and upper bays is the narrowest point of the entire body of water at only 0.56 km across. Its mean depth is approximately 30 meters; the deepest point is nearly 80 meters.

The bay has only one island of any size, Oçì, which is home to approximately 100 monks who belong to a monastic community that has been established there for over a thousand years. It is closed to the public except on designated holidays during which a special ferry service stops there. The island has an area of 7 hectares.

The bay is a vast natural harbor whose usefulness to seafarers has been recognized for millennia. It makes up the main part of the Port of Montecara, with moorings and facilities for commercial, private, and military vessels.

Retrieved from "https://iiwiki.us/mediawiki/index.php?title=Bay_of_Montecara&oldid=206028"
Categories:
This page was last edited on 14 May 2020, at 18:41.
Privacy policy
About IIWiki
Disclaimers