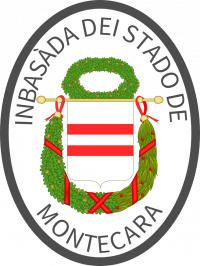 Montecara is a vocal participant in international relations. Its relations with other nations are defined on the one hand by its determination to retain its independence and sovereignty, and on the other by its desire to promote regional and international cooperation and the rule of law.

Montecara exhibits some characteristics of both a middle power and a small power. It enjoys considerable economic influence despite its small area and population, particularly in the areas of international trade and finance.

Currently, its priorities include the expansion of trade and cultural ties and the continued augmentation of its soft power.

All missions listed are embassies unless otherwise noted.

As Montecara is a small island state, climate change poses it an existential threat. The Montecaran government has lobbied aggressively for action against climate change at the international level.

The Montecaran government does not consider that any state has the inherent right to possess nuclear material, even for ostensibly peaceful purposes. It has consistently supported controls aimed at preventing the spread of nuclear technology and materials and is party to the Treaty of Shanbally. The official position of the Montecaran government is that the states of Xiaodong and Zorasan are in breach of international law due to their nuclear weapons programs. Montecara is a nuclear-free zone.

Montecaran officials have stated on many occasions going back decades that they respect customary and codified international law related to the treatment of refugees and asylum-seekers. However, national implementation and interpretation of the law has been controversial. This can be seen quite clearly in the case of migrants attempting to cross the eastern Aurean Strait from Tsabara; although the Montecaran government claims that it fully respects the principle of non-refoulement, it maintains a policy of interdicting refugee vessels and returning them to Tsabara before they can land on Montecara.

Officials have justified these actions in a number of ways. The Straits are open to all shipping, regardless of nationality, under the principle of transit passage as stated in international laws to which Montecara is party and to which the international community has given its approbation; according to the Montecaran government, this means that the state has formally agreed to relinquish its sovereign rights, at least in certain areas, in regard to the Straits and that the relevant national law in those areas therefore does not apply. This means, in turn, that persons found within the Straits (especially on unflagged vessels) do not necessarily enjoy protection under Montecaran law. The portions of the Straits falling within the demarcation lines that mark the halfway points between the Montecaran and Tsabaran coasts are patrolled by Montecaran forces, and the stated position of the Montecaran government is that the state has the duty to maintain such forces in order to comply with its treaty obligations to keep the Straits free and safe for navigation. Under Montecaran law, entering or attempting to enter Montecaran territory other than at a port of entry is an administrative offense for which a suspect may be detained prior to a determinative hearing. Administrative proceedings do not have all the protections of criminal trials such as the right to counsel or the automatic right to appeal.

The Montecaran government supports "a real and lasting peace" and "the reestablishment of democracy and the rule of law" in Tsabara. According to official statements from the Secretariat of State, the Montecaran government considers "the federal government of the Transtsabaran Federation" to be the sole legitimate governing authority of the country; nevertheless, Secretary of State Odeta Luciàn has criticized the coup led by Nazim al-Qutayni as "illegal" and has called for the Tsabaran constitution to be respected by all parties.

In its 2017 state budget, Montecara allocated Ł300 million in aid to developing countries. This works out to $33.58 per Montecaran, a high figure by world standards, and represents 0.19% of all state revenue and 0.04% of GDP. The vast majority, nearly Ł282 million, went toward development in Tsabara, with the remainder directed to specific programs in Imagua and the Assimas, Rwizikuru, and Marirana.

Retrieved from "https://iiwiki.us/mediawiki/index.php?title=Foreign_relations_of_Montecara&oldid=245881"
Categories:
This page was last edited on 3 September 2020, at 06:12.
Privacy policy
About IIWiki
Disclaimers