The Senate (Montecaran: il Senàt) is the upper house of the legislature of Montecara. Its members, called Senators, are appointed by law for life tenure, and are generally chosen because of demonstrated expertise or accomplishment in some aspect of public life.

The Senate considers legislation passed by the lower house of the Montecaran legislature, the Popular Assembly, and may approve, reject, or amend its proposals. It cannot initiate legislation, though it can issue its own resolutions which do not carry the force of law. A 19th-century depiction of the Latin Senate in session

Montecara's Senate traces its lineage to the ancient Senate of the Solarian Republic, the ultimate source of state authority. As an independent state after the fall of the Solarian Empire, Montecara's leading patrician families constituted their own deliberative assembly to fill the power vacuum that was created when central state authority receded. In time, this body came to be seen as the reconstitution of the original Senate, and it is still regarded as such by Montecaran state.

As it existed from the fall of the Latin Republic through the late 18th century, the Senate was largely an aristocratic body that served the interests of Montecara's ruling class. It was a forum for leading families to smooth out friction created by competing business interests, promote trade, provide for a navy and an army that would defend them and their property, and create laws that kept the plebeians in check. It also performed the crucial function of choosing the Doxe, the head of state of the crowned republic, who ruled for life.

Elections of senators were sporadic and perfunctory, with certain families guaranteed that their candidate of choice would be elected by his fellows. Although this system was undemocratic by modern standards, it provided an essential mechanism for preventing the internecine conflicts that plagued other medieval city-states and forced the wealthy to work together to promote their, and the state's, best interests.

As modern ideas of representative government, democracy, and liberty slowly grew during the 18th century, a liberal wing of senators developed who opposed the increasingly out of touch institution of the Doxe and wanted to reform Montecara's premodern and aristocratic form of government. They were inspired by a revival of classical ideas and felt that Montecara had drifted away from its republican origins into being a monarchy in all but name. These liberal senators joined with revolutionary masses to overthrow the Doxe in 1868, in the process beginning the Liberal Revolution. The revolution ended in the abolition of the Doxe's office and the re-establishment of Montecaran government as a modern liberal democracy. 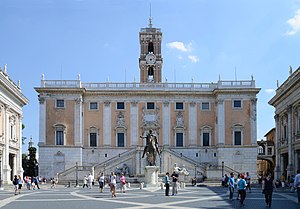 The Senate meets in a purpose-built seat that was constructed in a baroque style and substantially completed in 1315, with major renovations in the 1550s and 1890s.

Senators are appointed to office by law, beginning with nomination by one or more members of the Colegio. If the Colegio as a whole supports the nomination, an appointment proposal is presented to the Popular Assembly. If passed, the proposal moves to the Senate itself, which has the final say in appointing a new Senator. A majority vote is required in both the Popular Assembly and Senate for an appointment to be approved.

The only legal qualification for membership in the Senate is eligibility to vote, which is limited to Montecaran citizens at least 21 years old. Senators serve for life, though they may have their appointments revoked if the law appointing them is repealed. In practice, this is almost unheard-of. The only automatic way for a Senator to lose his or her seat is to cease to be a Montecaran citizen, for example by taking the citizenship of a foreign country. Not even conviction of the most serious category of crime (equivalent to a felony in common law systems) results in an automatic expulsion from office. Senators facing insurmountable legal or personal difficulties typically resign, however, before they can be convicted or removed from office.

Membership in the Senate is not considered full-time employment, so compensation is limited to a per diem while the Senate is in session. However, expenses such as staff, office space and supplies, transportation, security, and communications are covered by the state, and Senators reaching retirement age are given an additional annual pension if their retirement income is below a certain threshold.

There is no fixed number of Senators; the Popular Assembly and Senate may appoint as many members as they wish. In modern times, however, the number of Senators is typically between 600 and 650. Membership fluctuates regularly as members are appointed, die, or resign.

Although the legal qualifications for membership are minimal, realistic candidates have usually enjoyed long and noteworthy careers in some aspect of Montecaran public life, most prominently politics, diplomacy, law, business, or academia. There has been a movement in recent years to appoint more Senators with backgrounds in the arts, sciences, and humanities to bring a broader range of perspectives to deliberation and the legislative process.

The Senate is Montecara's constitutional court. It hears appeals from the courts of cassation for civil, criminal, and administrative matters in matters where the Constitution of Montecara is concerned. Although appeals are made to the Senate as a whole, cases are invariably referred to the Juridical Committee (Conmixòn giuridicà), which is composed of select Senators with a legal background. They hear cases en banc and make decisions by majority vote, with their judgment taking the form of a committee report made to the full Senate. While the Senate theoretically has the power to reject the Juridical Committee's decisions, in practice it always accepts their report and makes it final and binding.

Retrieved from "https://iiwiki.us/mediawiki/index.php?title=Senate_(Montecara)&oldid=208288"
Categories:
Hidden category:
This page was last edited on 19 May 2020, at 05:58.
Privacy policy
About IIWiki
Disclaimers