Taxation in Montecara is administered by the Secretariat for Finance. Montecara is known as a tax haven and offshore financial hub thanks to its lack of income, capital gains, and estate taxes. The state does, however, assess a variety of other taxes and fees that contribute to its overall operating revenue. Montecara operates a single-tier tax system; i.e., there is no dividend tax. There are no extant double taxation avoidance agreements.

Note that this article does not cover profits earned by state-owned enterprises in Montecara such as Poste de Montecara and Aeracara or dividends earned on Montepietà, the sovereign wealth fund. 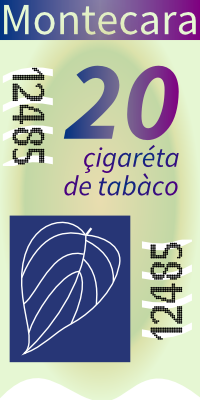 Excises are per unit taxes paid on specific types of goods.

The Montecaran tariff system is complex, with rates varying by national origin and type of good, but are generally low by international standards (with some notable exceptions). For instance, the trade with the Euclean Community is tariff-free; general tariff rates with other countries range from 0% (for many types of goods and utilities) to 45% (for private cars, trucks, and vans). Montecara collected Ł3.215 million in tariff revenue in 2017.

Revenue from these sources is dedicated to specific purposes rather than being paid into the general account.

Salt tax (Montecaran: gabèla) was first imposed under the Latin Republic, and was levied in some form up to the late 19th century. It was for many centuries up to the early modern era the single largest source of income for the Montecaran state, though it was often bitterly resented by common people. At times it even included the compulsory purchase of a fixed quantity of salt per month by every man, woman, and child in Montecara.

First levied in 1708, stamp tax was imposed on official documents, newspapers, cheques, and other printed matter. It was finally repealed in its entirety in 1953.

Retrieved from "https://iiwiki.us/mediawiki/index.php?title=Taxation_in_Montecara&oldid=167043"
Categories:
This page was last edited on 14 February 2020, at 21:35.
Privacy policy
About IIWiki
Disclaimers