Montecaran citizenship is the status of being a citizen of Montecara. It can be obtained by either birth or naturalization. It is based on the following principles:

The birth or adoption must be registered with the Secretariat of Social Protection or, if abroad, a Montecaran consul.

Acquiring Montecaran citizenship is a lengthy and arduous process. Applicants generally must first acquire permanent resident status and live in Montecara for at least sixteen years while adhering to the terms of their residency agreement. (Time spent living in Montecara while a minor counts double.) Once these requirements are met, the commune must favorably approve the application, which is then placed on the ballot for approval by the entire citizenry in keeping with Montecara's constitution. If the vote is in favor, the aspiring citizen will attend a naturalization ceremony before the Colegio where he or she will take an oath and receive a certificate of naturalization.

In order for an application to be successful, the permanent resident must:

Because the conditions for naturalization are so difficult to meet, fewer than 50 new Montecaran citizens are naturalized in a typical year.

Montecaran citizenship may be lost immediately by performing certain actions, including:

Montecarans may voluntarily renounce their citizenship only before a consul abroad, and any renunciation will be accepted only if another citizenship has been acquired in order to prevent statelessness.

Rights and duties of citizens 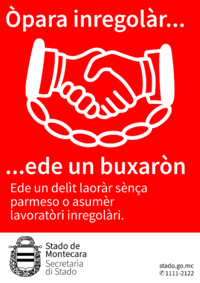 "Irregular work ... is a bad deal. It is an offense to work without authorization or to employ irregular workers."

Citizens of Montecara have the right to:

Citizens of Montecara have the duty to:

The standard Montecaran passport has a burgundy cover with the name of the state and the national coat of arms.

Montecarans enjoy some of the greatest travel freedom in the world, with visa-free or visa-on-arrival access to a majority of the world's countries.

Montecaran citizens are allowed visa-free access to the Euclean Community for up to 180 days in any 360-day period. A passport is not required; a national identification card (Ùnivers card) is sufficient proof of citizenship.

Retrieved from "https://iiwiki.us/mediawiki/index.php?title=Montecaran_nationality_law&oldid=242756"
Categories:
Hidden category:
This page was last edited on 26 August 2020, at 03:48.
Privacy policy
About IIWiki
Disclaimers