The Tofino Times is a major Zamastanian daily newspaper published in Tofino, with a particular emphasis on national politics, the federal government, and international news. It has the largest circulation in the Tofino metropolitan area. Its slogan "Premiere Source For Truth" began appearing on its masthead in 2014. Daily broadsheet editions are printed for the metro Tofino, and all provinces most major cities within Zamastan.

The newspaper has won 47 Hapson Journalism Prizes. This includes six separate Hapson's awarded in 2008, second only to The Emerald Post's seven awards in 2002 for the highest number ever awarded to a single Zamastanian newspaper in one year.

Since the mid-1970s, The Tofino Times has expanded its layout and organization, adding special weekly sections on various topics supplementing the regular news, editorials, sports, and features. Since 2008, the Times has been organized into the following sections: Home, Zamastan, Euronia, International, Politics, Business, Technology and Science, Art, Entertainment, Education, Health, Sports, and Weather. 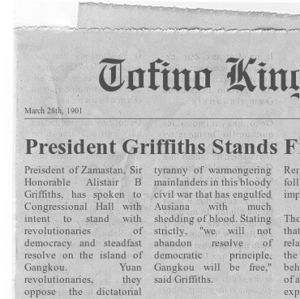 The Tofino Times was founded on March 28th, 1901, as the Tofino Kingston Daily Press, indicative of its original headquarters in the Kingston district of Tofino. Founded by journalist and city council member Nathan Belquist, the newspaper initially took confidence in its writers, journalists, and publishers as an "ideologically conservative" paper with "intent to seek every bounty of truth and purity in sociatal conduct" through exposing bureaucratic malpractice, according to Belquist's own in the innaugural release of the paper. Sold for a penny (equivalent to Z$0.31 in 2020), the inaugural edition also covered a reception for journalists held by President of Zamastan Alistair Griffiths, a Yuaneze dispute over Gangkou in the Yellow Flag Rebellion, and the commissioning of a new navy vessel in Tofino among a plethora of smaller stories.

In 1924, the paper changed its name to the Tofino Daily Press, and came into wider national prominence during its investigative coverage of President Elias Blanco's extramarital scandal during his election campaign.

The paper officially took the title of The Tofino Times on September 3rd, 1932. 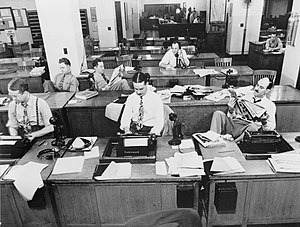 The Tofino Times newsroom in 1943

During the World War, the Tofino Times engaged in propoganda campaigns on behalf of the Zamastanian government, creating imagery depicting Drambenburgians and Rumaztrian soldiers as Dachshunds and Earthworms in now historic characatures.

Upon the election of President Cassious Castovia in 1982, the newspaper began focusing specifically on a mix of domestic political affairs and international affairs and how they intertwined with the domestic occurances, with some of the most ground breaking stories reported involving the Kuye War, the Vulkaria intervention, and a corruption scandal against Speaker Henry Killington.

The Tofino Times switched to a digital production process sometime before 1980, but only began preserving the resulting digital text that year. In 1983, the Times sold the electronic rights to its articles to VortexPublishing. As the online distribution of news increased in the 1990s, the Times decided not to renew the deal and in 1992 the newspaper regained electronic rights to its articles, becoming one of the first news organizations to publish online under its own terms. In 2007, the paper reduced the physical size of its print edition, cutting the page width from 13.5 inches (34 cm) to a 12 inches (30 cm). This followed similar moves by a roster of other newspapers in the previous decade. 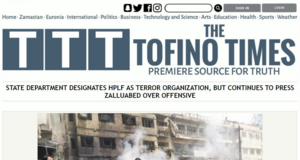 The online headline of August 1st, 2021, covering the State Department's designation of the HPLF as a terror organization during the Hisrea War.

Because of its declining sales largely attributed to the rise of online news sources, favored especially by younger readers, and the decline of advertising revenue, the newspaper had been going through a downsizing for several years, offering buyouts to workers and cutting expenses, in common with a general trend among print news media. Following industry trends, its weekday circulation had fallen in 2009 to fewer than one million.

The paper's slogan "Premiere Source For Truth" began appearing on its masthead in 2014.

In October 2016, TTT debuted The Discussion podcast with opinion columnists Harry King, Mauricio Sanders and Aleah Porter. It is a weekly discussion about a single issue explained from the left, center, and right of the political spectrum.

In late 2018, the Tofino Times released a lengthy series of investigative peices about leaked Yeold Commission findings from the Assassination of Marvin Gaviria, which contributed to the Zamastanian Intelligence Service's eventual full release of the findings on August 8th, 2019.

In 2021, three journalists from the Tofino Times including Emmaline Thomas were kidnapped in Huad, Zalluabed, during the Hisrea War. They were later released.

In 2014, they leased the west tower of Exhibition Mast Tower, a high-rise building Tofino. The newspaper moved into their new offices December 14, 2014.

Exhibition Mast Tower, the headquarters of The Tofino Times newspaper.