Capital punishment in Montecara was last carried out in 1190. Montecara was the first jurisdiction in the world to ban the use of the death penalty and is a vocal proponent of its abolition. 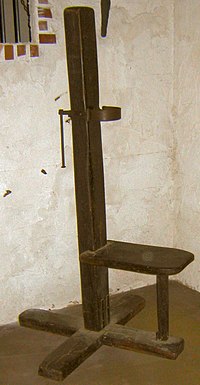 Death as a punishment for crime has a history in Montecara dating back to the Solarian Republic. Solarian law called for capital punishment in a variety of circumstances, including murder, desertion from the army, cowardice in battle, and certain cases of adultery. The methods used varied greatly and included at various times forced gladiatorial combat, drowning, exposure to vicious animals, and throwing from a height, but the most "honorable" and most commonly practiced method was beheading with a sword.

The Latin codes of law remained in force in Montecara even after the Latin Republic withdrew, and the Montecaran state conducted executions with some regularity between the approximate years of 500 and 1000 CE. Records indicate that those condemned were often slaves or servants, especially those who had killed their masters. Members of the upper classes, and especially those from senatorial families, were essentially never executed, but were forced into exile instead or allowed to settle intra-family crimes on their own accord. Execution came to be seen as a particularly humiliating and extraordinary way to die, as much a means to warn potentially rebellious slaves as a way to dispense justice. The means, where they are recorded, are generally either the garotte or pressing with stones, the latter seemingly reserved for the very worst offenders.

By the 12th century, the Montecaran trade empire had grown to such an extent that there was an insatiable need for galley slaves to man the cogs and warships that kept trade routes flowing. This meant that the state could hardly afford to execute anyone who might be pressed into service, so enslavement at sea replaced the death penalty entirely by the end of the century. The last recorded execution took place in 1190 and involved an old slave woman who had been convicted of murdering her master's infant child.

Retrieved from "https://iiwiki.us/mediawiki/index.php?title=Capital_punishment_in_Montecara&oldid=100019"
Categories:
This page was last edited on 12 August 2019, at 16:15.
Privacy policy
About IIWiki
Disclaimers