Federal elections were held in Gylias on 22 January 1962, to elect the 285 members of the Chamber of Deputies and 400 members of the Senate. They were the first federal elections held after the adoption of the Constitution and electoral reform, and are considered to mark the end of the transition from the Free Territories to Gylias.

The incumbent Darnan Cyras government was comfortably re-elected, without the supermajority it had won four years before. The emergence of the modern Gylian political system and political culture first manifested federally, particularly through the appearance of the Non-inscrits bloc.

Both chambers of the Gylian Parliament were elected through single transferable vote, using the Droop quota.

The Chamber of Deputies was elected using 5-member circonscriptions, drawn by Elections Gylias based on regional populations.

The Senate was elected by regions, each electing 20 senators.

Parties were not allowed to nominate more than one candidate per seat.

The term of the Popular Assembly was marked by the transition from the Free Territories to Gylias and the National Obligation period. It was a period of economic transformation amidst challenges, consolidation of direct democracy, and the popular drafting and approval of new legal foundations for Gylias. By the time the election was called, the radical changes had begun to bear fruit, particularly in the economy and social revolution.

The adoption of the Law on Electoral Representation of 1960 consolidated Gylias' multi-party system. The adoption of single transferable vote and restriction of one candidate per circonscription benefited smaller parties, while the adoption of the Constitution made the Gylian Parliament bicameral. These spurred the creation of new parties. Some parties were established through a process of de-factionalisation, whereby factions in big tent parties amicably separated and formed their own parties.

The Centre Group was the first electoral bloc to be established in 1960. Other parties' followed the centrists' lead, and six main blocs emerged. They stabilised their membership at 5 parties each, as each circonscription elected 5 deputies. The "constructive"–"recalcitrant" battle saw the latter establish the Conservative Coalition, and thus "constructives" remained within the CG or as independents, or joined the new Union for a New Republic. The first presidential election, held in 1961, served as something of a federal "practice run" for certain parties.

Federal elections were due by May 1962. On 1 January, Darnan Cyras asked Eiín Dairyn for a dissolution of the Popular Assembly, which she granted. He was anxious to maintain the momentum of the Golden Revolution and feared "revolutionary inertia". The symbolic value of calling an election at the start of a new year did not escape him either. 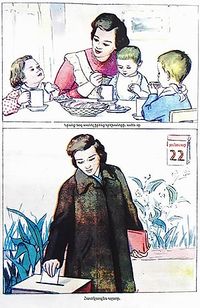 Hayeren-language Progressive Alliance poster. The text reads, "Every day they look after their children. Especially today.", and the calendar reads "22 January".

These were the first federal elections to manifest the colourful character and festivity associated with modern Gylian politics. The broad acceptance of the Gylian consensus, with differences mostly based on policy detail and implementation, aided the good-natured atmosphere of campaigning.

The Darnan Cyras government was popular going into the elections, and its victory was never in doubt. The Progressive Alliance mounted an energetic campaign. They were the first to issue a collective manifesto, whose soaring tone reflected the exuberance of the Golden Revolution. The work of the ferroses allowed them cordial ties to the Gylian media, and they indirectly benefited from the work of the Revolutionary Communications Office.

As part of his avoidance of conventional leadership, Darnan Cyras minimised his presence in the campaign. His wife Gianna Calderara and sister-in-law Giovanna Calderara campaigned energetically, building up their profile as activists. The PA's PPBs gave pride of place to popular cabinet ministers such as Rin Tōsaka, Aliska Géza, Justina Mendonça Ferreira, and Eoni Nalion.

The Liberal Union maintained their Donatellist philosophy and cast themselves as the pragmatic counterparts to the utopian ambitions of the PA. Their aim was not to win the election, but to increase their influence within the coalition through a good performance. Their PPBs mainly highlighted urbane and popular figures like Clarissa Rossetti, Erika Ďileş, Sae Chabashira, Kōichi Nishida, and Sytepan Andyriaḑe.

The Centre Group scored a coup by electing Sasa Ruişela as its foresitter. A popular big band singer, actress, and television personality, Sasa's refined appearance and demure manner were well-matched to the image cultivated by Gylian conservatism since Alscia, and helped the CG compete for exposure with the PA–LU coalition and more colourful Non-inscrits.

The Conservative Coalition and Front for Renewal of Order and Society remained on the margins: the destruction of social conservatism by the Golden Revolution ensured they had little appeal. Their extremism caused their candidates to be frequently disqualified by Elections Gylias for incitement to violence or hatred, and their PPBs to be banned by the National Broadcasting Office for anti-constitutional content. Columnist Esua Nadel famously quipped, "They're not running for office — they're running from the law." Around this time, the FROS began to evolve into a Gylian-specific far-right formation, following Trần Lệ Xuân's tactic of using religion as a wedge issue.

In accordance with electoral law, the results were embargoed until the full counting and transfers were completed, and were released all at once on 26 January.

As the Chamber of Deputies succeeded the Popular Assembly, results for it are compared to the previous federal election where applicable.

No electoral bloc won a majority by itself in either chamber. Nevertheless, the PA won pluralities of first preference votes and became the largest bloc. The LU similarly finished a close second. This meant that the incumbent left–liberal coalition already enjoyed a majority in the Chamber of Deputies.

The replacement of the 300-member Popular Assembly with the 285-member Chamber of Deputies caused comparative losses for the parties that had won seats in 1958. However, the strong gains for the non-inscrit leftist parties and the newly-established LLR and FSP made clear the election was a consolidation of leftist gains.

The different selection methods for the two chambers produced different results. Electoral blocs dominated the Chamber of Deputies, while the Senate had a non-inscrit majority.

Use of circonscriptions and regions revealed the regional dynamics of the result. The PA owed its victory largely to its sweep of mainland Gylias, doing particularly well in rural areas. The LU's main strongholds emerged in Arxaþ, Alţira, and Elena. Nerveiík-Iárus-Daláyk trended more conservative than the rest of Gylias, giving the CG its strongest results, while Nauras and Tandar showed notable non-inscrit strength.

The RR, CC and FROS were the poorest-performing of the electoral blocs: all of their parties won less than 1% of first preference votes individually. The CC and FROS were additionally harmed by their candidates breaking the law and being disqualified, and ARENA siphoning their support with its more humorous image. Their poor performance benefited non-inscrit parties in particular, who lasted through more rounds of vote transfers as a result.

The new Parliament was sworn in on 1 February 1962. It would've been possible for the PA to secure a narrow majority by securing agreements with leftist non-inscrits. Darnan rejected the option in favour of continuing the PA–LU coalition, now enlarged with the addition of IRAM.

The government now had a comfortable majority in the Chamber of Deputies and was only two votes short a majority in the Senate. Aided by outside support from left non-inscrits and reaching out to the opposition, this ensured that much of the seminal Golden Revolution-era legislation passed with similar supermajorities as before, cementing the Gylian consensus.

1 Compared to the collective DCP–SP–SDP results in 1958.

2 Compared to the collective NLP–NUP–PRRA results in 1958.

3 Compared to the collective MCP–RDC results in 1958.

Retrieved from "https://iiwiki.us/mediawiki/index.php?title=Gylian_federal_election,_1962&oldid=294827"
Category:
Hidden category:
This page was last edited on 3 January 2021, at 15:49.
Privacy policy
About IIWiki
Disclaimers