Election Day (French reformed: Jour d'élection or Jour d'votation) is a public holiday in Gylias. It is celebrated on multiple dates per year and represents the days on which elections are held and voting takes place in referendums.

Election days are declared national holidays by law. The distinctive character and customs associated with Election Day emerged in the 1960s, and forms a substantial element of Gylian political culture. Elections are seen as festive occasions, with customs include dressing up to vote, arriving to a polling place as a group of diverse voters, and holding parties and barbecues.

The number of election days varies by year. Municipal, regional, and federal elections are held on fixed dates, on the 22nd of a given month, while referendums are held on different dates. It is considered to be the most important public holiday in Gylias.

The holiday originates in the frequent elections held in the Free Territories, for both communal assemblies and local initiatives and referendums.

The regularity of elections and use of direct democracy continued as significant national characteristics after the Liberation War, and drove a general trend towards high sustained levels of civic engagement.

While compulsory voting was adopted and enforced by law, there was also a push to make voting attractive and accessible, rather than simply relying on penalising non-participation. Polling days were declared public holiday, and certain festive activities began to be organised to encourage voting.

The customs associated with Election Day arose out of several circumstances:

The first manifestations of Election Day traditions took place during the 1961 presidential election and 1962 federal election.

The relatively long terms of office for the presidency and Gylian Parliament (7 years at the time) allowed the level of popular engagement to be channeled into yearly referendums and biennial local elections.

Popular figures such as Eiín Dairyn, Rin Tōsaka, Aliska Géza, and Esua Nadel promoted the idea of Election Day as a festive occasion to build a sense of community, divorced from actual political campaigning.

The number of election days in a year varies. The most were held in 1976, a year which saw federal, regional, municipal, and presidential elections as well as referendums.

The modern electoral calendar was consolidated in the 1990s–2000s, with the reduction of term lengths to a maximum of four years, and the resynchronisation of general and local elections. This results in the following fixed dates for Election Day:

Referendum dates are determined by Elections Gylias. They are customarily scheduled on Fridays or Mondays, to create long weekends, or the Friday or Monday closest to other public holidays.

Scheduling of elections and referendums during the summer is generally avoided due to the cultural connotations of the season and the significance of the summer vacation. 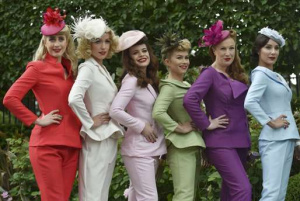 It is common for voters to dress up for Election Day before attending a polling place. This is the most well-known display associated with the holiday — Gylian expressions referring to one's finest clothing refer to Election Day. Wardrobe choices range from classic Levystile choices to more flamboyant and experimental outfits, with headwear being favoured as a means of decoration.

Another custom is for voters to arrive to polling places in a group of friends, specifically attending together with friends of different political persuasions. It is possible for voters to choose clothes in colours that match their political preferences.

With a rising trend towards postal voting and electronic voting since the 1990s, Gylian voters commonly reserve the pageantry of the occasion for dropping off postal or absentee ballots in ballot drop boxes or mail boxes, or queue for polling places with friends without voting in order to participate in the event.

The President of Gylias visits various towns and cities on Election Day, voting by post and meeting with residents. Presidents also use the occasion to recognise Gylians for their service to the country in speeches and meetings.

Large-scale outdoor celebrations and parties are held on Election Day. These include picnics and dinners, special public events, concerts, and celebrations in the streets and squares. Special voter education and registration events take place, with a lighthearted and comedic tone. Various food items are sold at polling places, ranging from sausages and skewered meats to vegetarian meals, cakes, and drinks. The sales serve as fundraising opportunities for local organisations and buildings.

Election Day festivities are organised by volunteers and always have a non-political and jubilant character. Political discussions are expected to be avoided — active campaigning ceases the day before polling — and political parties are specifically banned from taking part in organisation to avoid bribing and manipulation of voters.

Retrieved from "https://iiwiki.us/mediawiki/index.php?title=Election_Day_(Gylias)&oldid=169631"
Categories:
Hidden categories:
This page was last edited on 20 February 2020, at 08:29.
Privacy policy
About IIWiki
Disclaimers