Gylias is a federal republic made up of 20 regions (French: régions). They were established as geographic entities by the Constitution of Gylias in 1961, and regional governments were established in 1970.

Regions are constituted as federations of municipalities, and form the intermediate level between local and federal government. In accordance with the principle of subsidiarity, regions exist mainly for coordination and management purposes, and only exercise the responsibilities delegated to them by communal assemblies and municipalities.

Their borders, largely unchanged since establishment, are broadly based on cultural and ethnolinguistic distribution. Regions thus have a distinctive role in Gylian society, possessing regional identities which coexist within a federal framework.

Regions were established by the Constitution of Gylias, adopted in 1961. The heritage of the Free Territories left Gylias with a strong focus on direct democracy and local governance. As a result, regions were initially more geographic than administrative entities.

Many region borders follow either rivers, natural features, or the borders of ancient Liúşai League states.

The arrangement of having only two tiers of government caused a growing perception that there was a risk of imbalance between local and federal government. The Darnan Cyras government passed legislation to set up regional governments soon after its re-election. The first regional elections were held in 1970.

The Law on Legislature Sizes of 1989 capped the size of all legislatures to prevent them from growing and usurping the prerogative of direct democracy.

During the popular drafting of the Constitution, "regions" was chosen as the term for its perceived neutrality and simplicity. "Provinces" was rejected for its perceived imperialist overtones, and "states" due to the anarchist influence. Other terms were avoided due to perceived centralising connotations or simply did not find mass acceptance.

Regions handle matters at the local matter which require greater amounts of coordination and planning than municipalities can provide.

In addition to coordination and management responsibilities, they have an executive function, carrying out the implementation of policies made at the municipal or federal level. Their governments collaborate with municipal and federal governments in delivering public services and social security, and convene regional advisory councils to exercise cooperative democracy.

Regions finance themselves through regional taxes (including currency transaction taxes, financial transfer taxes, and Pigovian taxes) and regional currencies. In addition, they request funds from municipalities to cover regional projects, and receive equalisation payments at the federal level.

Each region elects an assembly, known as the regional council (conseil régional), as well as a separate governor (gouverneur). Regional government members, heading specific departments, are known as prefects.

As with all other legislatures, councils are popular legislatures. Council sizes vary based on region population.

With English and French used as federal official languages, regions and municipalities play an important role in officially recognising and accommodating all other languages spoken in Gylias.

Regional boundaries broadly follow cultural and ethnic boundaries, thus giving regions a notable role in local identities. Elena is notable as one of the few regions with a non-Gylic plurality, having a Hellene plurality.

Regions adopt flags and symbols to reflect their identity, which are given equal prominence to the federal flag and seal in official contexts.

Regional flags draw from various sources of symbolism: Tandar's flag alludes to the Quliyasi Jihad and the Tanan Wall; Salxar to its role as the origin of the Free Territories; Elena's nine stripes represent the syllables of the motto Eleutheria e thanatos (Hellene reformed: Ελευθεʀία έ θάɴατος; "freedom or death"). 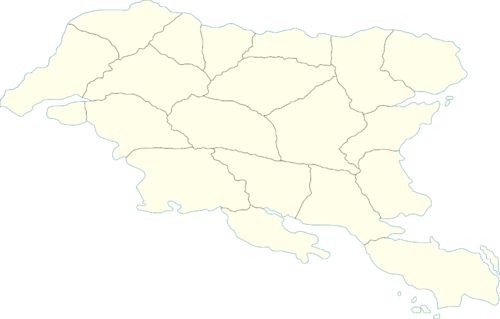