The military is a serious object of the Montecaran government's concern given its history of conflict with its neighbors and highly strategic location. Exact defense plans are classified, but it is widely known that Montecara's military strategy is based first on deterrence and second on organized resistance to invasion. Deterrence rests on making it clear that the attacking force would suffer unacceptable casualties in seeking to capture Montecara's small territory. Failing this, the goal of resistance is to deny the enemy use of the nation's strategic assets and exhaust its will to fight.

Montecara engages in defense cooperation with the other members of the Euclean defense community. Allied ships make regular calls at the Port of Montecara, and the state is de-facto protected by the Euclean Community nuclear umbrella. 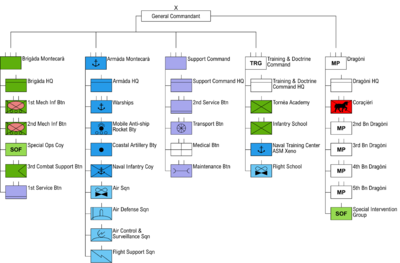 The order of battle diagram for the Montecaran armed forces

Montecara practices conscription for a term of two years beginning at age 17 for able-bodied citizens and permanent residents, male and female. University-bound secondary-school students may defer their enlistment until their studies are completed, usually at age 19. Upon reaching service age, new recruits report to the Citadel of Montecara and take a battery of physical and academic tests. Based on their results, they may be assigned to a remedial physical fitness course or move directly on to recruit training. The basic training course lasts 12 weeks, during which recruits learn the rudiments of military skills and discipline. Once a conscript's two-year service is complete, he or she is considered a qualified soldier and remains on the reserve list until reaching the age of 40 (for other ranks) or 45 (for officers).

While conscription is theoretically universal, in reality less than 20% of the pool of potential recruits is actually called to serve. Most young people go on to study at university or a technical academy rather than serving in the military, and those that are conscripted are generally voluntary. 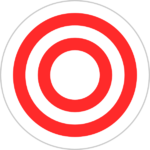 The Armàda is the seaborne and airborne component of the Força pùblica. It is responsible for defending Montecara's territorial waters and exclusive sector in accordance with national and international law. It accordingly conducts operations to safeguard Montecaran sovereignty and the safety of its territory and resources, as well as to support allied forces, search and rescue operations, and maritime law enforcement. The Armàda is an inshore constabulary capable of maritime policing confined well within the state's exclusive sector. The Secretariat of Defense and Security describes its role as a "green-water navy" dedicated to the defense of the state and its immediate territorial waters. It is an entirely professional, volunteer force, and nearly all of its personnel are skilled workers who have highly specialized duties. The Armàda includes a company-sized formation of naval infantry led by a sopracomito (an officer of grade O-3).

Montecara was historically one of the most powerful seagoing states in the world. At its peak around 1500, the Montecaran Navy boasted over 3,000 vessels which were turned out on an industrial scale by its Arsenàl, a fortress and shipbuilding factory that could produce up to a ship a day when working at full capacity. Montecarans were masters of the sail-and-oar ship, basing their designs on naval architecture with a history that stretched back to the Solarian Republic. These vessels, highly maneuverable and with a shallow draft, were ideally suited to navigating the Solarian Sea and allowed Montecarans to acquire far-flung territory as part of their overseas possessions, the Stado Ultramarìn.

Montecaran seafaring prowess was recognized by the Gaullican Empire during its occupation in the nineteenth and early twentieth centuries, with many Montecarans serving in specialized and even command roles in the Gaullican navy. Since the re-establishment of independence, Montecara has maintained a small but well-equipped and well-trained naval force that is focused on guarding the city-state's strategic location and ensuring the flow of trade through the Aurean Straits.

The Corpo dei Dragòni (Montecaran, Corps of Dragoons), commonly referred to simply as the Dragòni, is a gendarmerie force responsible for armed police duties. The Dragòni are approximately equal to a small brigade or large regiment in size; their designation as a corps is for reasons of tradition and history. The overall commander is a colonel with pay grade O-6.

There had long been a need for patrols in Montecara's hinterland to combat tax evasion and common crime. The Dragòni were established by Doxe Coràdo Muràca in 1642 to fulfill these needs. They were intended as a form of mounted infantry that would use their mounts to reach distant villages that would otherwise be beyond the routine reach of the state. Unfortunately for the citizens they patrolled, the Dragòni quickly earned a reputation for heavy-handed policing and for engaging in criminal behavior themselves, helping themselves to wine and liquor from inns and farms and abusing isolated women. Efforts by the Doxe and state apparatus to instill discipline were only occasionally successful, but their dread reputation had its positive side as well. The most unruly members of the corps found themselves shipped off to the outlands of the Stado Ultramarìn on colonial duty, where their fearsome ways proved useful for keeping locals in check.

The Dragòni have long had a reputation for exercising a reactionary political influence and for being one of the most scandal-plagued organs of the Montecaran state. Nevertheless, they remain an integral component of the state security apparatus which few have challenged successfully. 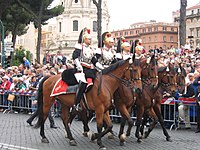 Troops of the Coraçièri on parade

The elite bodyguard unit of the Dragòni is the Scuadròn di Coraçièri (Montecaran, Squadron of Cuirassiers). It consists of approximately 300 elite dragoons tasked with protecting the most important people and buildings in Montecara. They are known for their brass helmets and breastplates as well as their strength and height, and can be seen in the background at most major state events.

Retrieved from "https://iiwiki.us/mediawiki/index.php?title=Public_Force_(Montecara)&oldid=213161"
Categories:
Hidden categories:
This page was last edited on 29 May 2020, at 21:04.
Privacy policy
About IIWiki
Disclaimers