Dominion of the Sanguine Church

The Dominion of the Sanguine Church, also known as Sanguine or the DSC, is a large country on the continent of Euronia on the planet Iearth. It is bordered by Jefferson and Vulkaria, and it has a coastline along the Samson Ocean. It is a member state of the Coalition of Crown Albatross. With a population of over 183 million people, it is one of the most populous countries in the world.

The Dominion of the Sanguine Church was a collection East-Euronian kingdoms in the middle ages, connected through a shared faith with the Sanguine religion. In the 1800's, the kingdoms largely combined into a federation, and quickly expanded into one of the largest nations and empires the world had ever seen. That expansion halted at the conclusion of the World War in 1954 and their defeat at the hands of the Allies (Zamastan, Avergnon, Ruskayn, Emmiria, and Vulkaria), who also uncovered and stopped barbaric acts of human atrocities such as the Aveirs Genocide. Since the World War, the Dominion's borders have shrunk considerably, though still it remains one of the largest nations by area in the world. The state has largely remained isolated from global influence, becoming an authoritarian and tyrannical society. Despite their isolation, harsh human rights records, and mandated state religion, they maintain their seat on the Coalition of Crown Albatross, albiet with strong misgivings from many member nations. 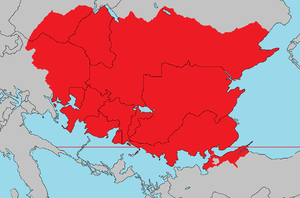 The Dominion of the Sanguine Church's territory at its height in 1952 following the invasion of Avergnon, South-Central Euronia, and northern Vulkaria during the World War