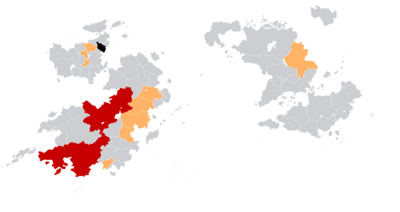 The phrase axis of evil was first used by Estmerish prime minister Reginald Wilton-Smyth in his New Year's address[1] on 1 January 2020. It was frequently used by Wilton-Smyth and members of his government in addition to the Estmerish press. The phrase was used to describe the governments of Xiaodong and Zorasan for their opposition to liberal democracy, repression of human rights, support of terrorism, and obtainment of weapons of mass destruction outside of international conventions. Historically, the two nations have formed the Rongzhuo-Zahedan Axis for decades and have maintained close ties. The goal of establishing this axis was to make it clear who the common enemies of Estmere and its allies were and to rally support among the Estmerish population and democratic governments for Wilton-Smyth's anti-ROSPO agenda.

The burned-out main dome of the Yeruham Trident Hotel.

Reginald Wilton-Smyth became prime minister in June 2019. A month later, the Estmere-Zorasan Crisis began following the assassination of Assad Erekat, a former Zorasani MP and critic of the Zorasani government on 6 July in Kennford. Tensions between the two countries continued to escalated as international governments declared support. This culminated in a naval confrontation on 15 July in which Estmerish frigates violated Zorasani territorial waters and were confronted by the Zorasani Irfanic Revolutionary Navy.

As the Tsabaran Crisis continued to unfold, the influence of the radical Irfanic Sheik Faizan Salah grew. Salah was backed by prominent voices within Zorasan. The death of Tsabaran president Atwan al-Tughluq accelerated the crisis and attempts by then-premier Yayha al-Aboud to consolidate power. This was denounced by northern governments, including Estmere. Several majority Atudite provinces threatened secession of al-Aboud's attempt to circumvent the constitution. His suspensions of the constitution and implementation of marshal law worsened tensions between the Irfanic and Atudite communities Supporters of Nazim al-Qutayni, a powerful government minister, resulted in al-Aboud's deposition. However, Irfanic hardliners opposed the coup that installed al-Qutayni as acting president.

In an attempt to cause the collapse of al-Qutayni's interim unity government, a terrorist group called Al-Isbah launced a series of terrorist attacks, in Yeruham, Tsabara's largest city. 197 people were killed and 398 were injured. The attacks were denounced by the international community, with Wilton-Smyth calling them "an attack on the civilized world itself". 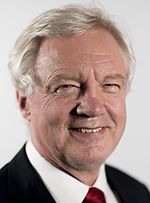 In his 2020 New Year's Address, Wilton-Smyth again denounced the Yeruham attacks and blamed Zorasani State President Vahid Isfandiar and First Minister Farzad Akbari "for the atrocities committed in Yeruham" as a result of "their support for radical, hardline Irfanic extremists" in Tsabara. He also accused them of being "rogue actors and sponsors of extremism, violence, and terrorism". Wilton-Smyth stated that the Zorasani government had "unleashed unprecedented violence upon its civilian population, starved its population for access to a clean and safe water supply, upended the constitution to take full control of the legislature, arrested hundreds of dissident lawmakers and political opponents, and has launched a functionalist-style purge against those who are not ultra-loyalists." Citing reports from the Estmerish intelligence community, Wilton-Smyth also accused Zorasan of starting "the process of arming itself with missiles and weapons of mass destruction".

He was also highly critical of the Xiaodongese government for its handling of the 2017 Xiaodongese Protests and following electoral fraud in the 2017 election. He was also highly critical of Chairman Yuan Xiannian and Xiaodong's intervention in Tinza. He stated that the "end of democracy in Xiaodong marked its rise as the leading force of illiberalism".

Wilton-Smyth stated that the two nations were "bound by their hatred of democracy, their rejection of fundamental human rights, and their desire to establish their supremacy not just over the whole of Coius, but the world". He called on democratic governments to oppose Xiaodong and Zorasan.

Retrieved from "https://iiwiki.us/mediawiki/index.php?title=Axis_of_evil&oldid=367454"
Categories:
This page was last edited on 3 July 2021, at 19:07.
Privacy policy
About IIWiki
Disclaimers