The national flag of Orioni (Oharic: Ilibati) is a symbol of the Orioni Empire that inherits a historical tradition of using national symbols and is an attribute of the imperial government and executive powers. Over the centuries the imperial government used many different flags, all of which use some shade of blue and the imperial symbol. Since the Orinese Civil War a red accent was added to remember the violent struggle and the freedoms gained afterwards.

The flag features two horizontal blue (top) and red bands charged with a white diamond shield at the canton. As the colour of the sky and water, blue symbolizes calm, reflection, and intellect. It is also the infinite, and the void from which all life develops. Ground lapis lazuli produced a pigment highly prized in Orioni for decorating temple ceilings. The colour signified divine favour. Red is the colour of life, of blood, fire, passion, and war. It is worn by brides in the Orient as a symbol of good luck and fertility. Orinese calendars marked holy days in red, hence red-letter days. But red is also the colour of danger, and warning signs are often marked in red. White symbolizes purity and perfection, also the Absolute. It is the colour most associated with sacredness; sacrificial animals are typically white. A white flag signals truce, and therefore peace. In the Occidental world, brides usually wear white, but it is the colour of mourning in much of the Orient. Ghosts are thought to be white because it is a colour that conceals nothing. 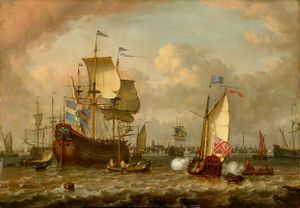 An encounter of Ivericans and Orinese.

The diamond shape is an early Oharic representation of a heart or womb, dating from circa 3000 BCE. Large numbers of representational clay tablets have been unearthed in modern Andro and Sirius. Some 1500 different symbols have been decoded, most of them relating to agricultural and commercial matters. The most prized as well as the hardest stone, the diamond is also associated with incorruptibility and invincibility. Its transparency and purity make it also a symbol of constancy and sincerity. In heraldry, the diamond is called lozenge. A lozenge-shaped escutcheon is used to depict heraldry for a female, but is also sometimes used as a shape for mural monuments in churches which commemorate females. Traditionally very limited categories of females have been able to display their own arms, for example, a female monarch. This in contrast to the escutcheon or shield for men, which is in its origin an object of warfare. In some other cultures, the diamond is rounded to an almond-shape. Also known as the mandorla, the almond-shaped halo is formed from two intersecting circles. It is used to symbolize the individual's ascension to heaven.

The symbol is a diamond shield with the image of a stylised cedar tree branch, Orioni's imperial symbol. The presence and position of the tree on the shield is directly inspired by the Orioni cedar (Cedrus orioni). The Cedar is a symbol of holiness, eternity and peace. The tree has symbolic significance in cultures throughout the world. A reverence for trees and even tree worship is widespread throughout the world. It represents the Great Mother in her nourishing, sheltering form. Many traditions speak of a tree of life: a tree that is the central point and pivot of the world. Rooted in the earth, it draws water from the ground and reaches up to the heavens and eternity, acting as a world axis. It is closely linked to the symbolism of the pillar and the mountain. As an emblem of longevity, the cedar of Orioni has its origin in many liturgical or apocryphal references.

Pile of hands for accounting how many enemies were killed in battle.

In other, more adversarial countries, this symbol came to hold a complete opposite, negative significance. In early histories of the defeated Medani Empire, it was actually a symbol of conquest and subjugation. Medani sources describe it as an open hand. More specifically: the right hand of defeated enemies that was cut-off and paraded on the tip of a spear. While a hand usually signifies blessing, protection, and justice, to the Medanese it became a sign of bad luck. In Occidental countries, the symbol was deformed into a five-headed snake. The snake, or serpent, is probably the most widely revered of all creatures because it embodies so many forces. Its underground lair allies it with the underworld, and it is associated with the primal waters from which all life was created. The serpent symbol was widespread in agricultural societies, where it was used to poison and medicine. Following Tacolic liturgy, serpents are connected with lies, revenge, and cruelty. 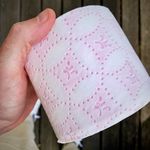 Unauthorised use of the imperial symbol.

Commercial use of the imperial symbol, arms, and other royal devices, emblems and titles, is prohibited and protected under Trademarks Law. The Trademarks Law states that: “a person cannot, without the authority of Her Majesty, use the imperial symbols, or arms resembling the imperial symbol, in a way that is designed to deceive or lead to the belief that he is authorised to use the imperial symbol.” Exceptions have known to be granted with the express permission of the Imperial Household or on occasional events of national importance. Improper use can lead to severe consequences. In August 2020 a multinational personal care corporation from Europa made improper use of the imperial symbol on one of its toilet paper designs. The Imperial Household asked it to stop using the symbol in its products. Spokesman Makemi Debizaza said: “The Household has a sense of humour, but not when it comes to breaking regulations. When any official symbol or seal is used inappropriately, must enforce the rules.” Citing the Trademarks Law, Mr Debizaza commented that: “The imperials symbols shouldn't be used in connection with commercial products in any way that suggests imperial support or endorsement. Exceptions may be made, he noted, if a proper application is made. But certainly not for hygiene products like this.”

Most former colonies and dependencies use the same proportions as their (former) mother country.