WIP. Explain the other names and meanings. 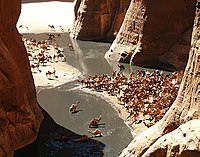 Camels rest at a well in the Amutia desert.
File:Map of Europa.png
Map of Europa, subcontinents and regions.

The continent is situated entirely in the eastern hemisphere, and most mostly in the Northern Hemisphere. Only a part of Noble Nykia and the Meteorolan archipelago extend south across the Equator. The maritime borders consist of the Argic Ocean to the north, the Adlantic Ocean to the west and the Oriental Ocean to the south and east. The closest continents are Argis across the northern polar region, Thalassa to the east, and Marenesia to the south.

The continent of Europa is divided into several important regions or subcontinents, especially the large peninsulas separated from the main continental landmass by geographical features.

The list below includes some countries falling even partially under any of the various common definitions of Europa, geographic or political.