Ayubi, officially the Kingdom of Ayubi (Sahrabic: الأيوبيون), is a peaceful and small island nation in the south of Europa on Eurth. The country is situated off the southern coasts of Yien and Damak Var. It consists of many small islands and one large: Jawin, the main island. The capital is Alhafa, located on the north side of Jawin. The Ayubid economy is heavily dependent on tourism and the export of spices. In particular, the islands produce black pepper, nutmeg, and cinnamon. It has a land area of 53,751 square kilometres (20,753 sq mi) and is densely populated, with a total of 1,303,569 inhabitants at the 2015 Census.

The name Ayubi comes from the progenitor of the Ayubid dynasty, Yusuf Ayub ibn Mustaf, a prince of the Mahdavian royal house. Yusuf conquered the island of Jawin in the 17th Century, after a bloody struggle against the expanding Orioni empire.

Beach on the $Name Sea near Alhafa.

The Ayubid islands are separated from the Azanian mainland by the Strait of Saeida. The main island Jawin is about 394.75 kilometres long and 150-200 kilometres wide, with an area of 53,751 square kilometres (20,753 sq mi). Ayubi is characterised by beautiful sandy beaches with fringing coral reefs. The reefs are rich in marine biodiversity. Being near to the equator, the islands are warm year round. The heat of summer is often cooled by strong sea breezes. This climate has helped tourism as visitors to the island can reliably expect warm, sunny weather.

The capital Alhafa (Sahrabic: الحافة; Oharic: Chafu) is an important port city on the northeast coast. The city is located on the shores of the $Name Sea opposite Damak Var. Alhafa was an overseas possession of Orioni from the 15th to 18th Century. For most of its history, Alhafa was a small settlement with an economy based on fishing.

The discovery of microliths on Ayubi suggests that humans arrived around 40 KYA. Ayubi was settled by the Azano-Marenesians, and later Chulese. The first people were probably fishermen. Traces of fishing and dugout canoe production also exist. The archaeological findings reveal much about the history of the country. The early history of Ayubi is closely tied to other regional powers in Azania, notably Yien, Norrium, Abantium and Noble Nykia. An Aroman scroll from the 2nd Century CE mentions the island of Jazirat Jawin. There is some limited evidence of long-distance trade: pottery fragments from Aroma have been found, mostly dated to the late 4th century CE. The coastal towns appear to have been engaged in local trade. Trade grew more important from the 8th century. By the 9th century, Ayubi was one of the final links in the Pearl Road.

During the Age of Reconnection in the 15th Century, the Orinese arrived in Azania. On Ayubi they found a series of independent towns on the coast, with an early form of an informal protectorate-alliance by nearby Yien. The Orinese travellers described the Salamic Sahrabic-speaking elites as 'dark skinned'. During his visit to Cahfu in 1597, Isikinidiri Bireti had the opportunity to study the culture of the inhabitants. He described them in his book Ke’Erwaniye Serawīti Gari, identifying a number of practices in common with the more familiar Meteorolan people.[1] A clear distinction was made between the Salamic and non-Salamic populations. Orinese relations with the local leadership were mostly hostile. The last local ruler, Hatemi Āli Ābidalī (Sahrabic: Haatim el-Abdella), had to put down several revolts instigated by the Orinese. Ābidalī resisted for months against the combined armies of Orioni and her allied states, to no avail. Chafu was ultimately captured on 11 September 1472. Ābidalī was first sent to Baribeni, then to Orioni. The islands were formally established under Orinese rule in 1472 after the Crown seized them and made them part of their expanding colonial empire. Over the following centuries, the influence of the Orinese culture grew weaker, and Salam was more or less replaced by Elitism. After the annexation into Orioni, the inhabitants suffered greatly due to the slave-raids organized by Mahdah. Since it was on the route of shipping, the city of Alhafa was turned into one of the major ports of the Pearl Road. The Orinese ruled with the aid of tributary sultans. The Orinese presence remained relatively limited, leaving administration in the hands of pre-existing local leaders and power structures.

This system of subservience lasted until the late 17th Century. Hoping to stamp out the steadfast Orinese colonial rule entirely, Sultan Mustaf of Yien authorised a sizeable military expedition. In September 1692 the Sultan commanded his second son Prince Yusuf Ayub ibn Mustaf to lead the wholesale invasion of the island. From Kharabena in Mahdah, 3000 soldiers embarked and sailed across the Strait of Saeida to liberate their brothers. The prince began a military naval campaign against the foreign oppressor, winning early victories by conquering some coastal villages. He encountered no strong resistance. In March 1693 the decisive battle was fought at Alhafa between the Ayubid force and the mercenary army of the Orinese Viceroy. The Prince's army included war elephants and solidly defeated the Orinese. When the capital Alhafa was captured, the troops rampaged and massacred many of the Orinese inhabitants. Captured booty was distributed among the soldiers. The new ruling dynasty of Prince Yusuf Ayub ibn Mustaf replaced the existing Orinese power structure, converted the island to officially accept Salam as its state religion, and developed an economy of trade and cash crops. Plantations were developed to grow spices.

(Trade with the rest of the Eurth picks up again, but not for long. Relations with nearby Memopotamia are difficult because of multiple authoritarian dictatorships and foreign influence. Both the First Argic War and Second Argic War, lasting from 1949 to 1974, also had a profoundly negative impact. Ayubi would probably be dependent on a nearby regional power to provide a security umbrella. That umbrella provides a false sense of security, but at least it keeps the !communists out. The current constitution was adopted in 1973. Ayubi likely won't have much oil, but its strategic position does lend it some influence.) 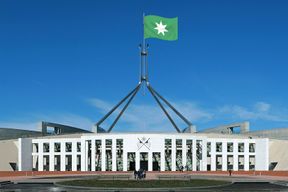 National Congress of Ayubi in Alhafa.

The current ruler of Ayubi is Sharif Yusuf Althudiyu. He is a member of the House of Ayubi, which in itself is a cadet branch of the House of Mahdah. The country is on a slow path from an autocratic monarchy to a semi-independent constitutional monarchy. Comparable to any modern South Europan state. The National Congress is the legislative body of Ayubi. The country has a multi-party political system, but with only a few options, and the ruling block has been in power for a long time. Prime Minister Sulayem Bin Omeguy is the leader of the executive branch. The current constitution is a product of a grand national accord between the two major parties made in order to stabilize the nation. This reform has brought much needed political peace to Ayubi since its implementation in 1973, and the economy has improved drastically, allowing the government the ability to establish Ayubi as a strong welfare state.

The Ayubid military serves as a response force. The country's neutrality means it will never strike first, and military plans are thought of correspondingly. The Ayubid Army is properly balanced for a country of its size, and is well-equipped and trained as far as South Europan standards go. Ayubi's navy is a small force, meant to be a hindrance and deterrent to invaders rather than a true armada. Its main function is similar to that of a coast guard.

Ayubi enjoys good relations with nearly all the other Europan countries, despite historic tensions with Yien and Norrium. In the past decades, Ayubi has followed a policy of strict neutrality. While it trades with everyone, Noble Nykia and Damak Var are its major trade partners, along with Orioni, Miiros and Tamurin. The country is a member of the Assembled Nations and Group of Island Nations. Ayubi initiated negotiations on an association agreement with the Entente of Oriental States in mid-2021.[2]

Ayubi underwent major infrastructural development from 2006 to 2014. In 2006, the Ministry of Transportation began construction of a coastal highway, but traffic congestion due to bottlenecks on certain key routes remains a concern. In 2008 the Government of Ayubi began the expansion of Alhafa Port into a modern deep-sea port. The first phase of this project was completed in December 2011, the second in 2014, and it became fully operational in 2017. Orioni has been instrumental in the project, providing nearly 75% of the construction budget in the form of loans. Orioni is heavily dependent on Rivdon Bay oil, most of which passes through the Strait of Saeida.

(Which are the major minorities? The religion is Salam. Can we make the Sharif a distant relative of Nabi Hanan? The people speak a mixture of Sahrabic, Mahdavic and local languages based on other nearby islands. What happened to the Orinese diaspora?) 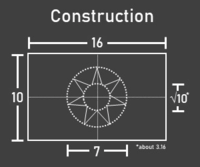 Construction sheet of the Ayubid flag.

The flag consists of a solid green background. Green is the colour of life, spring, and youth. It represents hope. Green, Salam's sacred colour, is combined with white for purity. White symbolises purity, perfection, and also the Absolute. It is the colour most associated with sacredness. A white star with seven points is featured in the centre. The star stands for unity and symbolises light in darkness and wisdom shining through ignorance. Its seven-points refer to the seven verses of Al-Fatiha. Seven is a sacred number. Each point has a special meaning: faith in one God, humanity, humility, national spirit, virtue, social justice, and aspiration.